US President Had Posted The Message On Twitter Quoting News Agency ANI's Tweet About His Offer To Mediate Between India And Pakistan.

US President Donald Trump tweeted and then deleted a post where he had expressed ‘hope’ that India and Pakistan will resolve the Kashmir issue 'quickly'. Donald Trump's personal handle @realDonaldTrump, which he uses quite regularily, had posted the message on Twitter quoting a news agency ANI tweet. The ANI tweet carried his quote from the bilateral meeting with Pakistan Prime Minister Imran Khan in New York on Monday.

After the meeting, Trump was asked if he will offer to mediate between India and Pakistan on Kashmir issue.

Trump had said, “I am ready, willing and able. It’s a complex issue. It’s being going on for a long time. But if both want it, I will be ready to do it.”

Trump quoted the tweet by ANI and posted, "Hopefully they will work it out, and quickly!" 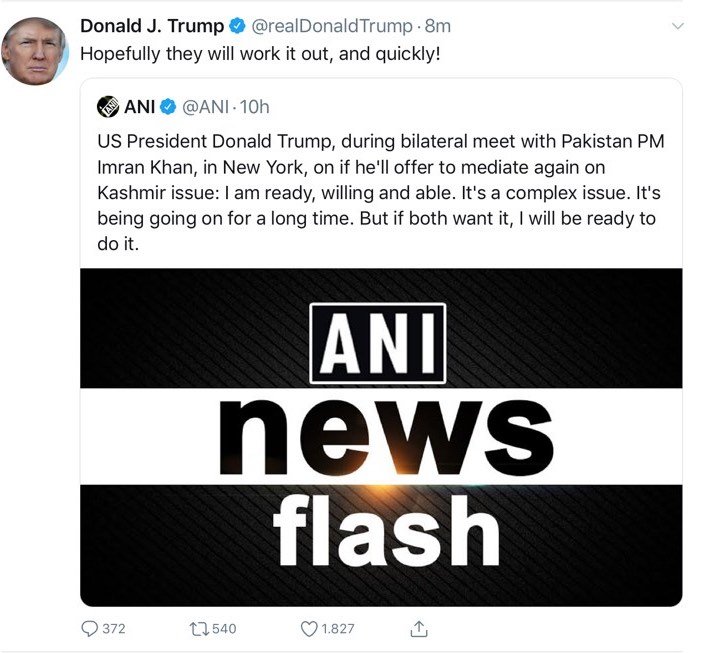 When asked to comment on the situation of Kashmir after the abrogation of Article 370 during his joint media interaction with Imran Khan, Trump said he wants to see everyone treated will in the Valley.

"I want to see everyone treated well in Kashmir. There is a solution to this," the US President said.

Both the leaders met in New York ahead of the 74th session of the UN General Assembly that opens on September 24. The meeting comes a day after the high-profile "Howdy, Modi!" rally in Houston in which the US president and Prime Minister Narendra Modi shared a stage and showered each other with praise.

Trump praised the 'Howdy, Modi' mega rally in presence of Khan and said he has heard a "very aggressive statement" by Prime Minister Modi.

"It was very well received within the room," Trump said, referring to the gathering of 50,000 people at the NRG stadium in Houston.

The US President has expressed his willingness to mediate between India and Pakistan. However, India has always maintained that Kashmir is a bilateral issue while the abrogation of Article 370 is an internal matter. In July this year, President Trump had stirred up a storm when he claimed that PM Modi had requested him to mediate on the Kashmir issue. However, India had denied any such claim and also rejected the offer of mediation.