In latest developments, DK Shivakumar has managed to take disgruntled MLAs Ramalinga Reddy, ST Somshekar, Byrathi Basavaraj with him in his car for negotiations.

BC Patil, Congress MLA said that, 14 MLAs have submitted resignation to Secretary of Speakers office. “We will let you know about future strategy," he said. 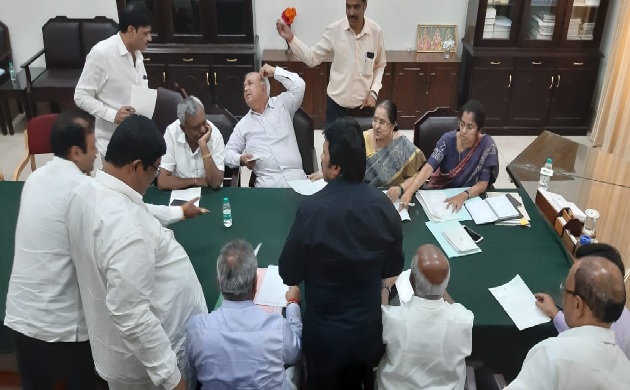 Congress MLA Ramalinga Reddy speaking about his resignation said, "I have come to submit my resignation to speaker. I don't know about my daughter (Congress MLA Sowmya Reddy), she is an independent woman. I am not going to blame anyone in the party or the high command. I somewhere feel I was being neglected over some issues. That is why I have taken this decision,” he said.

In contrarry, Water resources minister, DK Shivakumar has reached Vidhana Soudha and said, “I have come to meet the MLAs and nobody will resign."

Chief Minister H.D. Kumaraswamy is in the United States since 28 June where he took part in groundbreaking ceremony for a temple in New Jersey. On Monday, Kumaraswamy in Tweet wrote, "I’m at the Kalabhairaveshwara temple foundation laying ceremony (in New Jersey). I’m watching TV channels. Destabilising the government continues to be a daydream of BJP (sic)."

Karnataka hardly been politically stable. The BJP emerged as the single largest party winning 104 of the 224 seats. It fell short of majority by 13 MLAs. The Congress, with 80 MLAs, and JDS, with 37, entered into an alliance to form a coalition government.

Earlier,  Deputy Chief Minister G Parameshwara had said, "BJP's attempts to destabilise the government has continued, there is no worry, government is stable. Just because one or two legislators resign, government wont fall."

"They have already made their decision, once the decision is taken to an extent we can try to pacify, but once it is surpassed, it is their decision. So I have not contacted," he added.