Meanwhile, The Congress Is Gearing Up For A Nationwide Protest Against The BJP, Terming The Subversion Of The Congress-JDS Coalition Government One Of The Most Heinous Political Horse Tradings In India.

Soon after failing to prove majority of the Congress-JDS coalition government led by him in Karnataka Assembly, Chief Minister HD Kumaraswamy submitted his resignation to Governor Vajubhai Vala at Raj Bhawan in Bengaluru on Tuesday night. The confidence motion moved by Kumaraswamy received 99 votes in favour and 105 against it. Vala accepted his resignation, adding that the JDS chief will continue to be the care taker chief minister of Karnataka untill the next government is formed in the politically unstabled state.

"I hereby tender my resignation to the post of Chief Minister of Karnataka along with my Cabinet and request you to kindly accept the same. I take this opportunity to extend my grateful thanks for the co-operation given to me and my colleagues during my tenure," Kumaraswamy wrote in his resignation letter.

READ | When are rebel Congress-JDS MLAs in Mumbai returning to Karnataka? 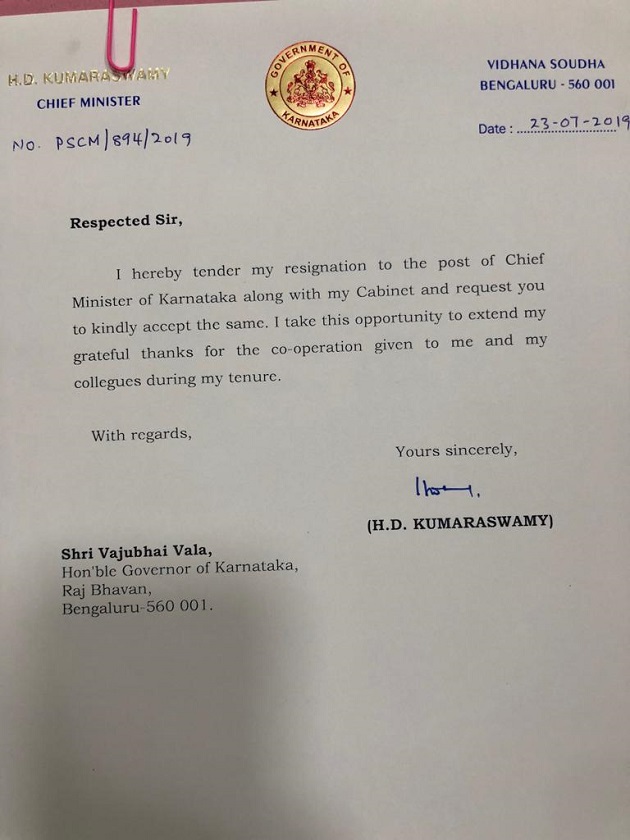 The trust vote was taken up on Tuesday after defying two deadlines set by Governor Vala to Kumaraswamy, asking to demonstrate his majority on Friday itself. A wave of resignations had triggered the political turbulence in the state, pushing the 14-month old coalition government to the brink of collapse. As many as 16 rebel MLAs - 13 from the Congress and 3 from JDS - have resigned and two Independents withdrew their support to the coalition government in southern state.

Hours before the floor test, the Assembly also witnessed high-voltage politicial drama as workers from both the BJP and Congress party came to blows. The Congress workers had tried to forcibly take away two independent lawmakers, who switched sides, to the assembly to vote for the coalition.

Known for his emotional speeches, Chief Minister Kumaraswamy said he was ready to "sacrifice" his post happily and he has no greed to remain in power. "I am ready to happily sacrifice this position," the JDS chief said as the assembly debated the confidence motion for four days. He also said he had no intention to drag the trust vote and added, "I apologise to the Speaker and the people of the state".

Kumaraswamy also said discussions were on why he had not resigned and was sticking to the chair. He said when the 2018 assembly polls results were out, he had plans to quit politics. "My political entry itself was all of a sudden and unexpected," he said.

BJP leader BS Yeddyurappa, who is set to be the next chief minister, said, "It's the victory of democracy. People were fed up with the Kumaraswamy government. I want to assure the people of karnataka that a new era of development will start now onwards".

"Farmers are suffering due to drought and other factors, we assure farmers that we will give them more importance to live happily and take appropriate decisions as early as possible," he added.

BJP lawmaker JC Madhuswamy said, "For 14 months, the people were upset that we were not in power. We saw this in BJP's victory in the Lok Sabha polls. No matter what happens, this is good for the state. Would like to thank 105 MLAs for their support without complaining at any time. They have been patient and we have won the appreciation of the people. We will keep their faith alive once we officially take oath".

Meanwhile, the Congress is gearing up for a nationwide protest against the BJP, terming the subversion of the Congress-JDS coalition government "one of the most heinous political horse tradings in India".

Speaking to the media, AICC general secretary KC Venugopal said, "The coalition government in Karnataka was brought down by the nefarious joint efforts of the Central Government, Governor, State Government of Maharashtra and Central BJP leadership".