In the eye of the storm: As Cyclone Fani approaches Odisha, a survivor recalls Phailin horror

In 1999, The Super Cyclone 'toppled' The State Government, But Ramped Up The State's Disaster Preparedness For Keeps. Twenty Years Since, Can Odisha Ward Off Another Cyclone Threat?

It was early in October 2013. After months of rains, the south-east Monsoon was slowly withdrawing from eastern India. Odisha, like the rest of the country, was gearing up for the Dussehra festivities. But, amid the bedecked pandals, the cityscape dotted with glittering billboards flashing Puja discounts, and the braided fairy lights along the major thoroughfares, the coastal state was bracing up for another eventuality--a category 4 storm "Phailin".

The cyclone was predicted to make a landfall near Gopalpur coast in the southern district of Ganjam, which shares a border with Andhra Pradesh. It was supposed to metamorphose into a deep depression and eventually weaken after it moved further through the landmass. Evacuations were carried out on a war footing, tourists were told to vacate the hotels, those vulnerable were moved to the multi-purpose cyclone shelters--now a familiar sight in all coastal districts. Vegetables and prices of essential commodities like candles, flattened rice, oil and sugar etc. skyrocketed, as panic and rumours made way for artificial scarcity. Till the afternoon of October 12, rains had started pounding on the major districts of the state--that boasts of a 500-km long coastline. 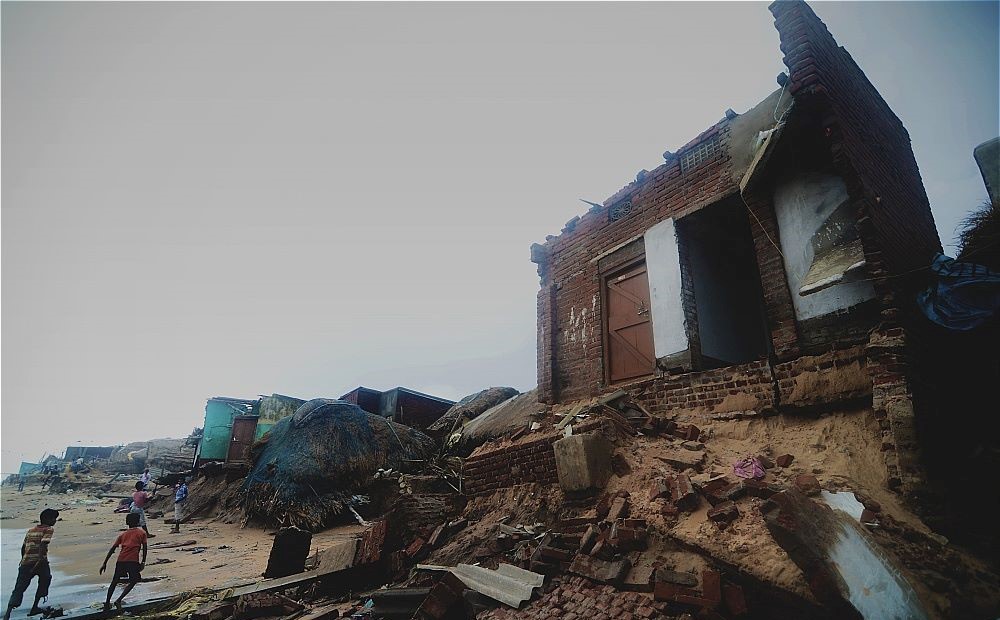 One hundred eighty kilometres away from the site of landfall, in the capital city of Bhubaneswar, the wind speeds had begun picking up. Most private vehicles had gone off the roads, shops and establishments were shut, the city's biggest stadium complex--Kalinga Stadium--was turned into a relief centre. Fire services and state disaster response teams were mobilised. Eyeing 'zero casualty' and equipped with tree cutters, lifeboats and relief materials, they were to be dispatched to the pockets which were most vulnerable. Minutes before the landfall, the proverbial lull increased the eeriness. It was close to midnight when gusty winds started to batter the temple city. Electricity was cut off in the major parts as a precautionary measure and the remaining localities soon had their powerlines snapped, once trees and branches tripped on them. Amid intermittent screams and the shrieking winds, I could hear a window pane crashing down from a nearby building, setting off a car security alarm-- the blaring noise of which went on till early next morning.

I was no stranger to cyclones. For someone who has lived through the devastating cyclone of 1999, the scale of preparedness for Phailin appeared very perceptible. The early warning systems were in place, the people were cautioned in advance and hence were better prepared for exingencies. Yet, as the storm passed over the city that night, terrifying thoughts crossed my mind too. With every roar and whistle of the wind, each building block of hope was tumbling down too. The wind speed intensified further, rainwater started to seep in through the walls as the terrace door shook and trembled. Flower pots from the terrace were getting knocked down in small bouts. That one corner of the flat, somehow, felt like the safest place around.

Hours later, the city woke up to unprecedented scenes of devastation. Several trees and electric poles were uprooted, some of the large hoardings which survived stood twisted or slanted; streets were waterlogged. The cyclone, that passed over the city in the night, had left a trail of destruction. The damage assessment was to take weeks, the electricity restoration process would take days, while for many families--it would take forever to piece things together. 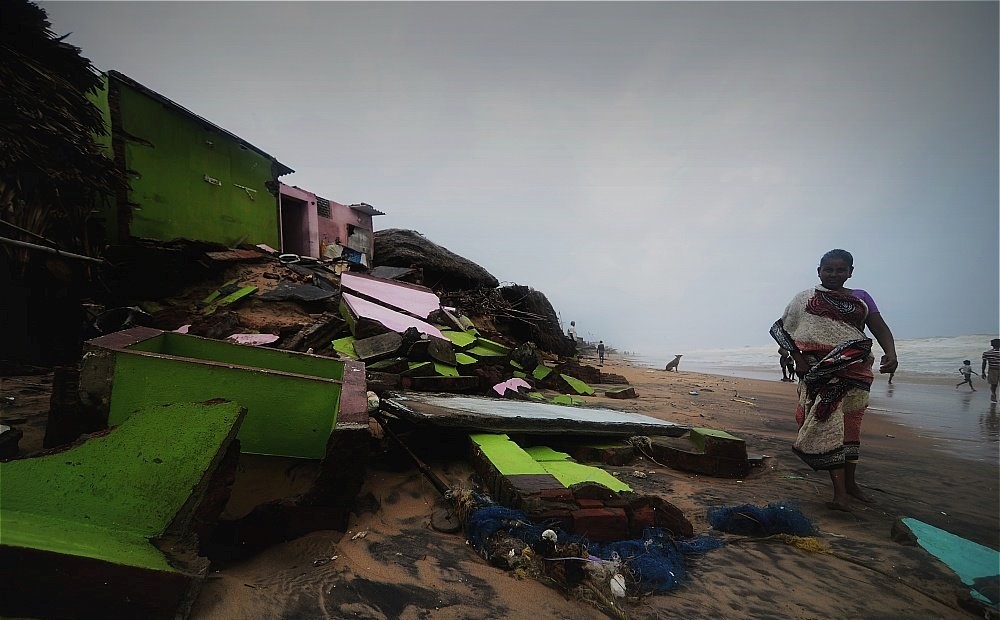 The spectre was more horrific in Puri, the coastal city and popular tourist destination, located 60 kilometres south of Bhubaneswar. The winds raging at 200km/hour had whipped up a storm surge of over 2 metres, washing away the livelihood of the fishers in Pentakota-- a fishermen enclave on the outskirts of the pilgrim town. The sea waves appeared menacing, pulverised boats and fishing nets laid scattered on the shore. The waves had breached the embankments and the saline water had spilled over to the road, debris had piled up on the beach while the people rummaged through the rubble, scraping their belongings together.

When the dust settled, the net economic loss was estimated to be over Rs 6,500 crores, including Rs 2,500-crore damage caused to standing crops. Although the "zero casualty" target was achieved, 'Phailin' added another chapter to Odisha's tryst with natural calamities. Phailin became the most severe storm to hit the state since the super cyclone of 1999, which left nearly 7,000 people dead. Odisha withstood two more cyclones in the subsequent years- Hudhud in 2014 and Titli (2018). A recent report published by the state government states that Odisha sees reoccurrence of cyclones every 15 months. It is 20 months in case of Andhra Pradesh and 28 for West Bengal. 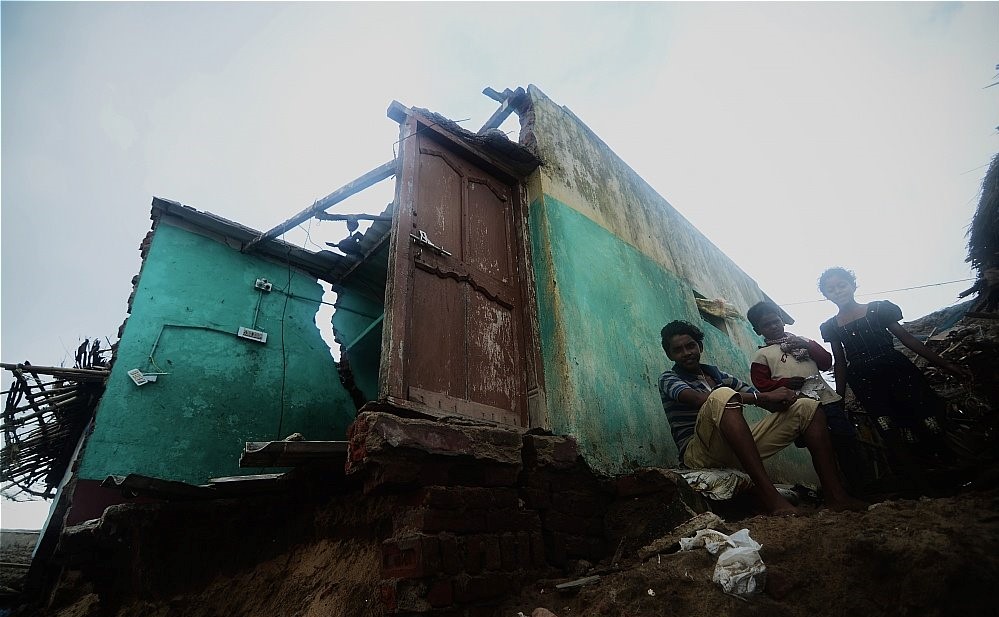 As another extremely severe cyclone, Fani, knocks at Odisha's coast, the state braces for the worst. It is touted to be the second severe April cyclone in 118 years to hit the state--infamous for most post-monsoon tropical storms.

For the rest of the world, a storm may appear as an adventure, an occasion to trend a hashtag on Twitter, or send half-hearted text messages to acquaintances, but for those stuck in the eye of it, it's life and death. Odisha, you are in our prayers.

This too shall pass.