While Several Invitees Were Asked For Their Invitation Card Before Entering The Luxury Hotel In Islamabad, Others Were Inquired About Their Professions And Residences.

A day after several guests invited to Indian High Commission's Iftar party in Islamabad faced an "unprecedented level of harassment" owing to enhanced security checks in front of the event venue, the government of India on Sunday issued a strongly worded statement to protest against these "ugly events" in the capital city of Pakistan.

The press release, released by the High Commission of India in Islamabad, strongly criticised the "gross intimidation of guests invited for the Iftar event" on Saturday evening and also called on the Pakistani government to investigate the matter at the earliest.

"We have requested the government of Pakistan to urgently investigate these ugly events and share the results of the exercise with the High Commission of India. Further, we have emphasized to the government of Pakistan the need to ensure that diplomats and officials of the High Commission of India are allowed to discharge their diplomatic functions without fear of coercion or harassment," the letter read.

Dubbing the incident "a concerted campaign" by Pakistan's security agencies, the five-stanza-letter further alleged that "the disappointing chain of events of 1 June not only violated basic norms of diplomatic conduct but are against all notions of civilized behaviour". 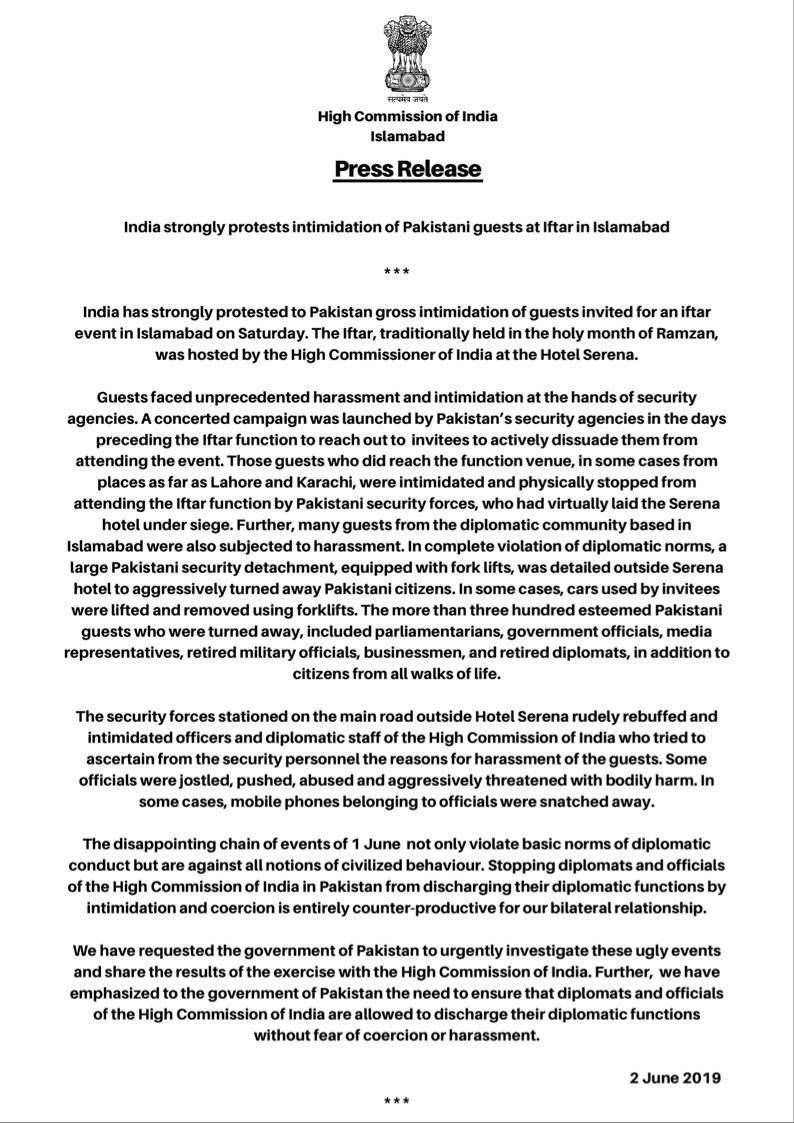 "Some officials were jostled, pushed, abused and aggressively threatened with bodily harm while mobile phones belonging to officials were snatched away in some cases," it added.

The Iftar, traditionally held in the holy month of Ramzan was hosted by Indian High Commissioner Ajay Bisaria at the Serena Hotel, but ended up on a bitter note, with many of the invitees being stopped by the Pakistani officials on one pretext or other.

While several invitees were asked for their invitation card before entering the luxury hotel in the heart of Islamabad, others were inquired about their professions and residences. There are also reports that some of the guests could not make it to the party due to questioning and additional security deployment at the venue.

The more than three hundred esteemed guests who were turned away, included parliamentarians, government officials, media representatives, retired military officials, businessman, and retired diplomats, in addition to citizens from all walks of life.