The Day After India Carried Out Another Surgical Strike Across The Line Of Control In Early Morning Hours On Tuesday, There Were Reports Of A Ceasefire Violation In The Uri Sector Of Baramulla District Of Jammu And Kashmir And An Encounter In The Memander Area Of Shopian.

The day after India carried out another surgical strike across the Line of Control in early morning hours on Tuesday, there were reports of a ceasefire violation in the Uri sector of Baramulla district of Jammu and Kashmir and an encounter in the Memander area of Shopian. While theÂ US has urged both Pakistan and India to exercise 'restraint', weÂ have to see how the day unfolds and what developments take place on this front.Â

10.15 pm:Â My appeal to Indiaâ€™s opposition - â€œLet the country speak in one voiceâ€. Please introspect - â€œYour ill-advised statement is being used by Pakistan to bolster its case,â€ says Arun Jaitley.

8:01 pm:Â As advised by security agencies, Red Alert has been imposed in enitre DMRC netwok from 6PM onwards on Wednesday. Under Red Alert, all station controllers are required to inspect entire station premises for any suspicious items/activity including parking lots and report to the Control Centre every two hours.

7:00 pm:Â Jammu and Kashmir: Ceasefire violation by Pakistan in Krishna Ghati and Mendhar sector of Poonch.

5.34 pm:Â The meeting of leaders of 21 political parties condemned the dastardly Pulwama attack by Pakistan-sponsored terrorists of Jaish-e-Mohammed on 14th February 2019 and lauded the action taken by our armed forces, saysÂ Congress president Rahul Gandhi after opposition meeting.

4:39 pm: High alert has been issued in Jaisalmer. All flights from or to the city airport have been cancelled.

4:32 pm:Â As flight operations resumed at 9 airports, which were shut earlier in the day, security personnel have been deployed in heavy numbers at all major airports across India.

3.22 pm: One Pakistan Air Force aircraft was shot down by Mig 21 Bison. We lost one Mig 21, the pilot is missing in action, says Air Vice Marshal RGK Kapoor. Pakistan has responded this morning by using its air force to target military installations on the Indian side, says Kapoor.

2.45 pm:Â IAF pilot Wing Commander Abhinandan took off in a MiG 21 Bison jet today, he is yet to return, reports news agency ANI.

2.45 pm:Â Two terrorists belonging to JeM were killed in today's encounter. One terrorist belonged to Pakistan and one was a local. Police have started an investigation, saysÂ IGP Kashmir SP Pani on today's Shopian encounter.Â

2.22 pm:Â Joint Communique of 16th Meeting of Foreign Ministers of India, Russia & China: The Ministers stressed that those committing, orchestrating, inciting or supporting terrorist acts must be held accountable and brought to justice in accordance with existing international commitments.

2.20 pm:Â There has been no damage or injuries, firing from across the border has also stopped & everything is okay now. We have a plan for evacuation, transportation, rehabilitation & medical facilities but there is no need to panic for now, saysÂ Riyaz Malik, Sub-Divisional Magistrate, Uri.

2.10 pm:Â Global stocks turn negative as India-Pakistan tensions worsen.Â Asian shares and Wall Street stock futures turned negative on Wednesday after Pakistan said it had shot down two Indian jets in its territory, sending investors out of riskier markets and into more conservative choices such as the yen, reports Reuters.

2.07 pm: All flights from India to Pakistan cancelled.

1.48 pm:Â DG ISPR, Pakistan, Maj Gen Asif Ghafoor: There are reports of crash of an Indian aircraft on the Indian side (in Budgam), we had no engagement with that aircraft.

1.20 pm: Arun Jaitley's BIG statement: If the US can conduct an operation in Abbottabad, then India can also do that.

1.17 pm: Sri Lanka had unequivocally condemned this terrorist attack in Pulwama... In this context, Sri Lanka requests India and Pakistan to act in a manner that ensures security peace and stability of the entire region. 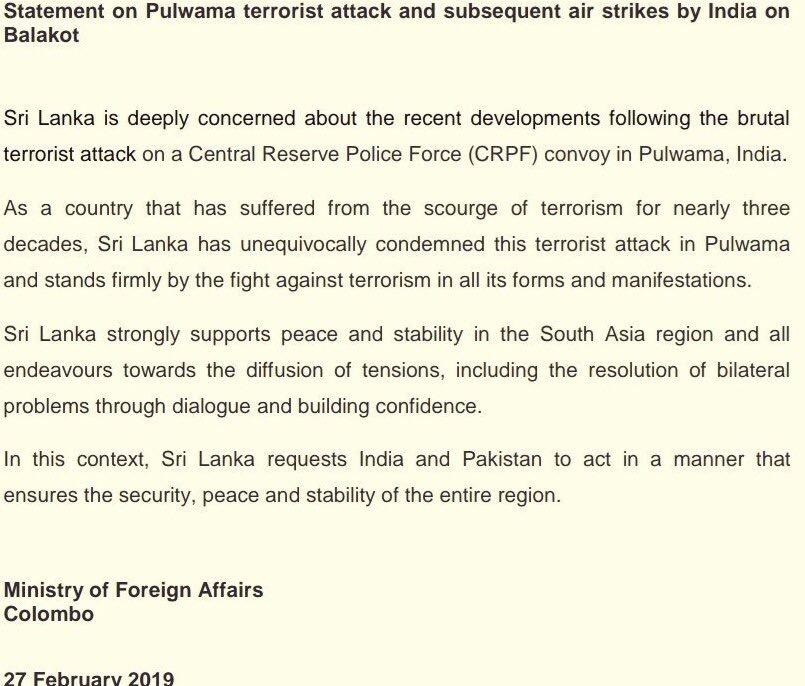 1.15 pm: All flights to Pakistan from Delhi airport cancelled.

1.10 pm:Â Due to operational reasons the airspace at Amritsar has been closed for now. No commercial flights are coming to Amritsar, there is no base here, so flights are not even taking off from here,Â AP Acharya, Amritsar Airport Director.

1.07 pm:Â DIG says Pilot and Co Pilot died in the fighter crash at Budgam. One civilian also has been killed in this crash. All Srinagar flights cancelled. Airports in Leh also closed for commercial flights.

1.05 pm: Security increased in and around Taj Mahal.

1.03 pm: Prime Minister Narendra Modi cut short his address at a function in Vigyan Bhawan on Wednesday and rushed to attend a meeting to review the security situation arising out of Pakistan's attempt to violate Indian air space, reported ANI. Modi was replying to the questions from youngsters during the National Youth Festival 2019 when he was handed over a small piece of paper by an official of Prime Minister Office (PMO). The Prime Minister immediately stopped and walked toward the panelist where Union Minister Rajyavardhan Rathore was also present. The PM waived at the audience and immediately left the dais and rushed to his office.

12.43 pm:Â International flights that transit between Indian and Pakistani airspace now being affected. Some flights returning to origin, while others appear to be seeking alternate routing.

12.42 pm:Â Passengers stranded as flight operations at Amritsar airport have been suspended.

Punjab: Passengers stranded as flight operations at Amritsar airport have been suspended. pic.twitter.com/fQEtEEqZZh

12 pm:Â Indian airline Vistara says due to airspace restrictions, flights to and from Amritsar, Srinagar, Chandigarh and Jammu currently on hold.

11.56 am: High-level meeting underway in the Home Ministry.

8.25 am: US urges India and Pakistan to maintain 'restraint' after IAF airstrike.

8.20 am:Â The firing has stopped in theÂ Memander area of Shopian district. A search operation is underway.

7.10 am: Pakistan will hold an NSC meeting today.

6.54 am: Ceasefire violation in the GwalataÂ sector of Uri in Baramulla district. Heavy firing on both sides.

6.32 am: The power supply of certain areas in 15 Corps Cantonment was switched off as aÂ precautionary measure, officials said.Â Some areas of the cantonment are located on Zaberwan hills and electric supply to this area was stopped in anticipation of a Pakistani retaliation to the pre-dawn strike by IAF jets on the biggest terrorist camp of Jaish-e-Mohammed inside Pakistan.

6.30 am:Â Encounter underway in theÂ Memander village of ShopianÂ in South Kashmir. As many asÂ three terrorists trapped in a house. Firing on in a joint operation of the state police, Army and CRPF.