ITBP havaldar threatens to become next 'Paan Singh Tomar', if...

Amit Singh, A Havaldar At The ITBP, Said In A Facebook Post That He Would Become The Next Paan Singh Tomar, A Notorious Soldier-turned-athlete-turned-rebel, If Those Responsible For The Assault Were Not Punished.

An Indo-Tibetan Border Police (ITBP) jawan posted in Jammu and Kashmir’s Udhampur district has threatened to turn rebel like ‘Paan Singh Tomar’ if authorities don’t take action against some private security guards at a tourism spot who allegedly thrashed his brother, leaving him 80% blind.

Amit Singh, a Havaldar at the ITBP, said in a Facebook post that he would become the next Paan Singh Tomar, a notorious soldier-turned-athlete-turned-rebel, if those responsible for the assault were not punished.

"The Madhya Pradesh government should give justice to my family and brother, or else I will become a new Paan Singh Tomar...I won't need to learn how to fire a gun," he said in Hindi.

The ITBP havaldar told The New Indian Express that his family, comprising three brothers and two sisters with five children (two of toddlers) had gone for a picnic to Hanuvantiya Island near the Indira Sagar on August 16.

The family had a spat with the private security guards posted there who didn’t allow them to take milk bottles and biscuits for the two toddlers inside the hotspot. The fight turned physical and the security guards led by Charan Singh Gond and some boatmen attacked the family, including women and kids with bricks, sticks and even beer bottles. 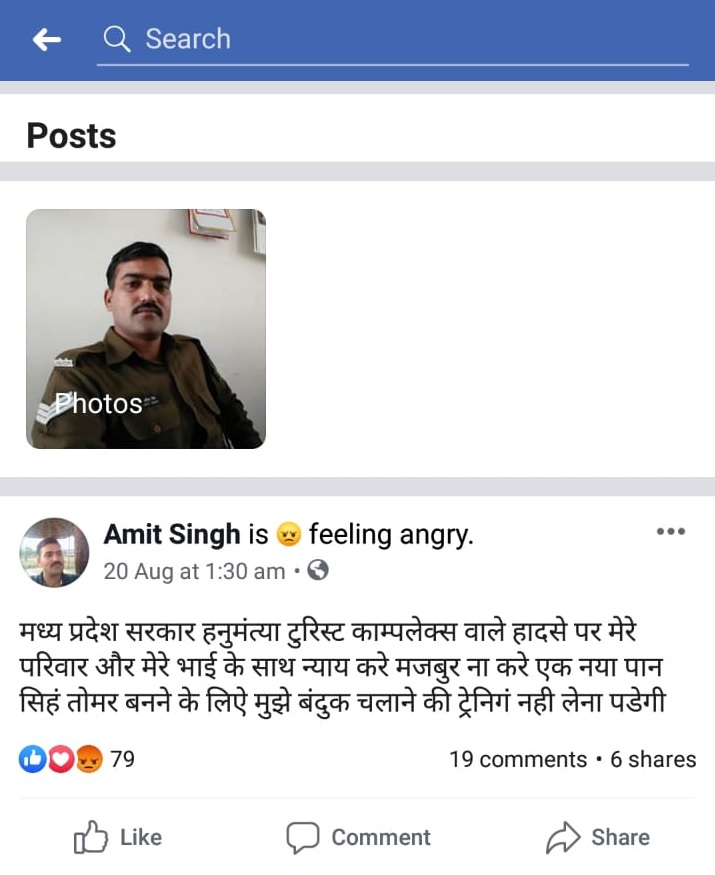 According to Amit, a stone hit his brother Atul’s eye, causing him 80 per cent vision loss.

He also alleged that the police have “merely lodged a case on their complaint against two guards and 15 unidentified guards and boatmen under simple IPC sections pertaining to abusive behaviour, physical assault and criminal intimidation and not a case of attempt to murder owing to grievous injury in my brother's eye.”

The police have clarified that they have filed cases against the security guards and the family members.

“Both groups had clashed with each other, during which one of the members of the family sustained serious wounds on the eye. Since the doctors at government health facility in Mundi (Khandwa) had initially declared the injury as simple, hence the case was lodged under simple IPC sections. Once we get the new medico legal report from doctors in Indore, we'll suitably add more sections in the FIR,” a police officer told NDTV.