The Advertisement In A Local Daily Greater Kashmir On Friday Stated: 'Are We Going To Succumb To Militants? Think!!!'

More than two months after Kashmir shutdown, state administration has come out with a full-page advertisement in a local daily urging people to resume normal activities. This came amid government's claim of normalcy in the Valley. Tensions are high in Kashmir after New Delhi on August 5 announced abrogation of provisions of Article 370 and decided to bifurcate the state into Union territories - Jammu and Kashmir and Ladakh - hours after Kashmir was placed under a total clampdown.

The advertisement in a local daily Greater Kashmir on Friday stated: “Are we going to succumb to militants? Think!!! For over 70 years now, the people of J&K have been misled. They have been victims of a vicious campaign and motivated propaganda that has kept them trapped in an endless cycle of terrorism, violence, destruction and poverty.”

“While separatists sent their children to exotic lands to study, work and earn, they instigated the common people to push their children into violence, stone-pelting and hartals. They used threats of terrorists, coercion and misinformation to beguile the people. Today, militants are using the same tactic of threats and coercion. Are we going to tolerate this?” it stated. 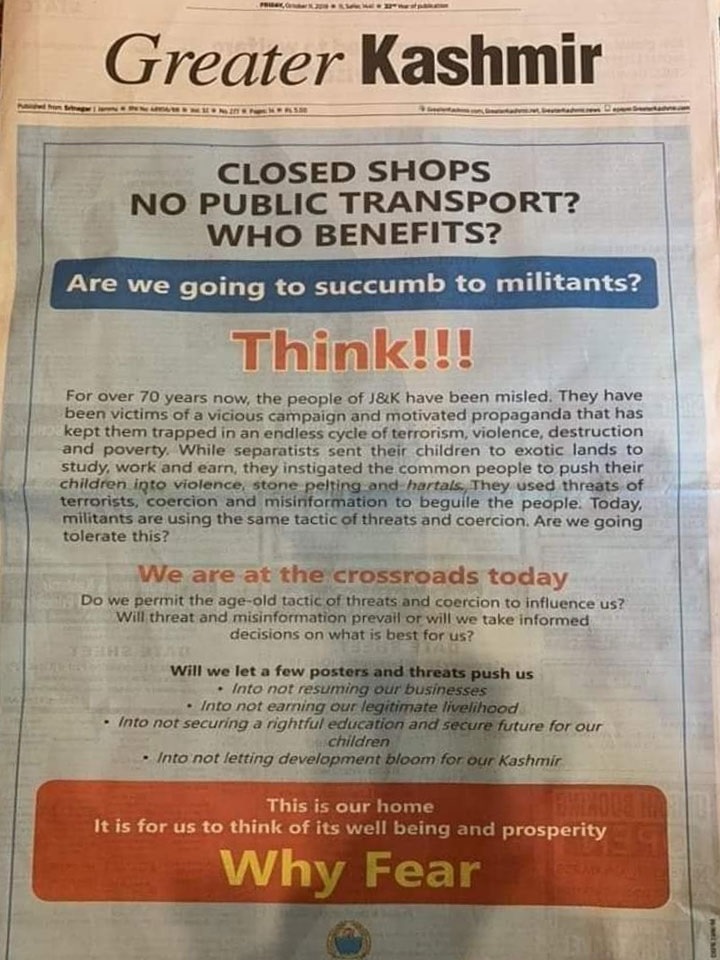 The 'darbar move' is shifting of the capital during which the secretariat and all other government offices of the Jammu and Kashmir are shifted after every six months. This unique practice has been in trend since the time of the Maharajahs. Under this system, all administrative things are run from Srinagar till late October and move to Jammu in the first week of November.

This time, it will coincide with the date when the new UT of Jammu and Kashmir will come into effect.