Apart From Dhankar, Several Other Governors Were Transferred And Replaced In Various States, In A Major Reshuffle By The Rashtrapati Bhavan Earlier In The Month.

Days after being appointed as the 28th governor of West Bengal, Jagdeep Dhankhar, a former Lok Sabha MP from Jhunjhunu, Rajasthan, on Tuesday was sworn in at the Raj Bhavan in Kolkata.

Banerjee welcomed the new governor by presenting him a flower bouquet after the swearing-in ceremony.

READ | Who is Jagdeep Dhankhar? All you need to know about newly appointed Governor of West Bengal 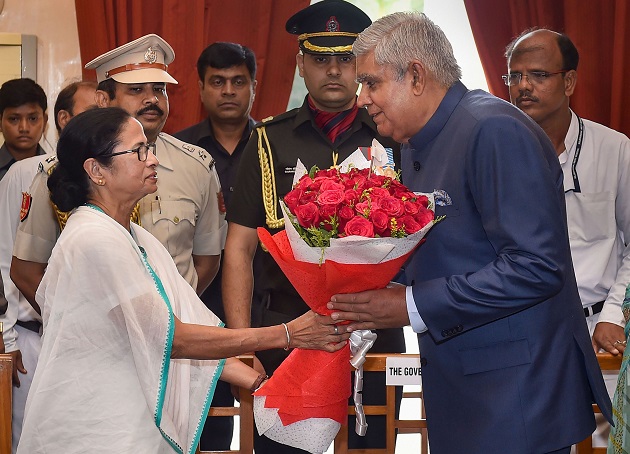 The new governor, who is also a noted Supreme Court advocate, met the vice-chancellors of Calcutta University, Jadavpur University, Presidency University and Visva-Bharati University on this occasion.

Dhankhar (68), who was Union deputy minister of parliamentary affairs in 1990-91, quit the Congress in 2003 and became a member of the BJP. He was appointed as the West Bengal governor by the Centre on July 20, replacing Keshari Nath Tripathi.

Apart from Dhankar, several other governors were transferred and replaced in various states, in a major reshuffle by the Rashtrapati Bhavan earlier in the month.

Seventy-seven-year-old Anandiben Patel, who was appointed as governor of Madhya Pradesh on January 2018, was shifted to Uttar Pradesh. While veteran BJP leader and Bihar Governor Lalji Tandon replaces Patel in Madhya Pradesh, Phagu Chauhan will replace Tandon as Bihar governor.