JNU Statement On The Ongoing Violence Inside The Campus. '..there Is Law And Order Situation In The JNU Campus. Masked Miscreants Armed With Sticks Are Roaming Around, Damaging Property And Attacking People. The JNU Administration Has Called The Police To Maintain Order'.

The Jawaharlal Nehru University Students' Union (JNUSU) on Sunday released a statement after violent clashes broke out between the Left and ABVP students. In its release, the administration said that there is law and order situation in the JNU campus. 'Masked miscreants armed with sticks are roaming around, damaging property and attacking people. The JNU Adminstration has called the police to maintain order,' the release added. 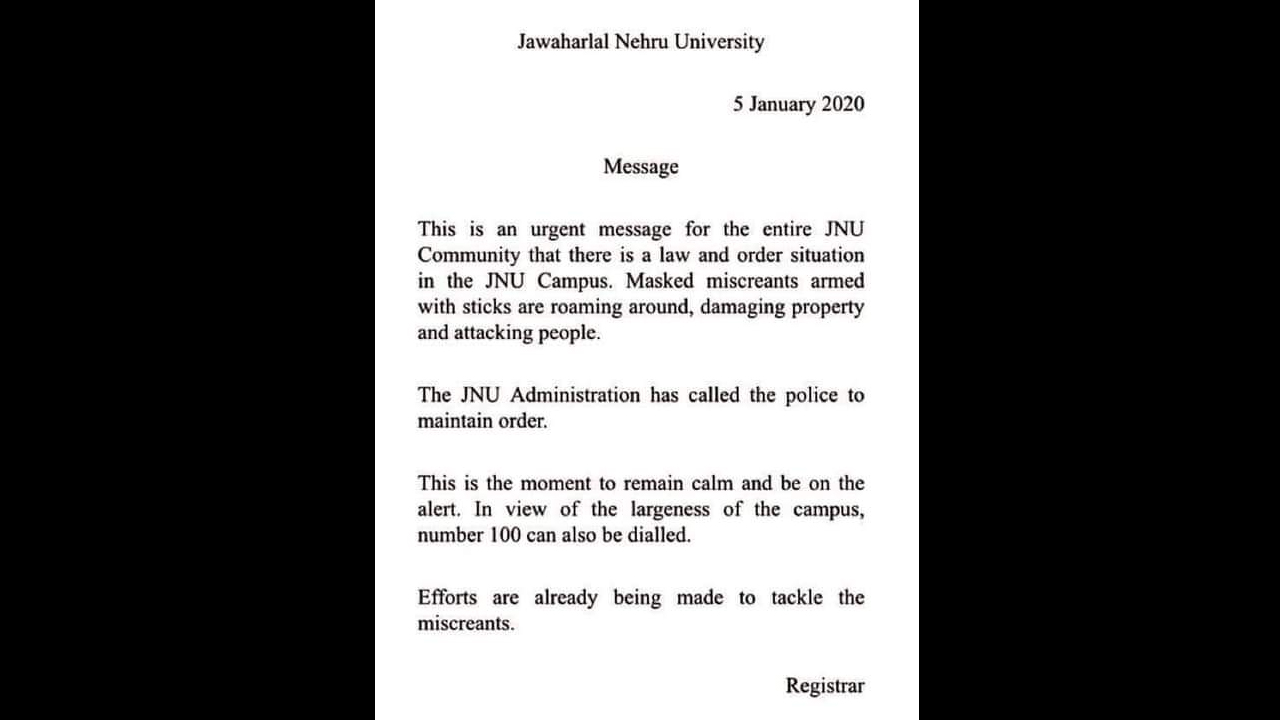 A clash broke out between members of the Jawaharlal Nehru University (JNU) Students’ Union and the ABVP on the university campus on Sunday, sources said. According to the sources, the clash took place during a public meeting organised by the JNU Teachers’ Association. The students’ union claimed that its president Aishe Ghosh and many other students were injured in stone pelting by ABVP members.

But the RSS-backed students’ organisation alleged that its members were brutally attacked by Left-affiliated student outfits and 25 of them were injured. The JNUSU claimed that “ABVP members wearing masks were moving around on the campus with lathis, rods and hammers”.

“They are pelting bricks...getting into hostels and beating up students. Several teachers and students have also been beaten up,” the JNUSU claimed. JNUSU president Ghosh has been “brutally” attacked and she was bleeding from her head, they said.

Members of the Left-backed student outfits alleged that outsiders were allowed to enter the campus and they barged into hostels, including girls’ hostels. The Akhil Bharatiya Vidyarthi Parishad (ABVP) claimed that its members were brutally attacked by students affiliated to Left student organisations SFI, AISA and DSF.

“Around 25 students have been seriously injured in the attack and there is no information about whereabouts of 11 students. Many ABVP members are being attacked in hostels and the hostels are being vandalised by the Leftist goons,” the ABVP said.