Karnataka Crisis: How numbers stack up in Vidhana Soudha and other political developments

The Congress-JD(S) government in Karnataka has plunged into crisis and could be on the verge of collapse. The political drama unfolded on June 6 after 13 Members of Legislative Assembly (MLAs) from both the parties submitted their resignation to the Speaker’s office. However, speaker K. R. Ramesh Kumar is yet to accept all these resignations. Both the JD(S) and the Congress have been plagued by dissension over allocation of ministerial berths and distribution of Lok Sabha poll tickets. The cracks became deeper after the BJP swept the parliamentary election in the state.

Karnataka Crisis: What the numbers say

The coalition has 118 MLAs in the 224-member Assembly. 13 MLAs as of now have submitted their resignations. Of the 13, there are ten Congress legislators and three from the JD(S). If the resignations are accepted, Congress-JDS numbers would reduce to 105. Out of which the grand old party will have 71 legislators including the speaker while the JDS will be left with 35 legislators including the Bahujan Samaj Party (BSP) candidate.

The Bharatiya Janata Party has 105 MLAs in the House.

In latest developments, Independent MLA Nagesh announced his resignation from Kumaraswamy government and extended support to BJP. This helps the BJP to reach 106 figure one seat ahead of the coalition government owing if the resignations are accepted.

Karnataka crisis: MLAs who have resigned 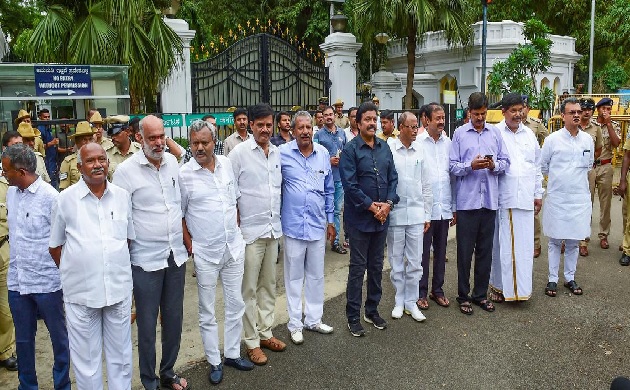 Chief Minister HD Kumaraswamy who was on a visit to the US returned to Bengaluru on Sunday evening and held emergency meeting with JD(S) MLAs. Speculations are rife that more MLAs are likely to announce their resignations. In case the Congress and the JDS leadership fails to convince Ramalinga Reddy, his daughter Saumya Reddy will also quit. She is an MLA from Jayanagar.
News Nation has learnt that to diffuse the tension, Kumaraswamy is likely to offer post of deputy Chief Minister to Ramalinga Reddy. Also, former prime minister and JD(S) supremo HD Deve Gowda held meetings with party leaders and the Congress.

A circular has been issued by the Congress to all MLAs to attend Congress Legislature Party (CLP) meeting called by CLP leader Siddaramaiah on July 9. Karnataka Congress in charge KC Venugopal and Karnataka Congress chief Dinesh Gundu Rao will also be present in the meet.

According to reports, Congress is offering most of the rebel MLAs ministerial positions and funds for their constituencies to stay.

Congress hits out at BJP

Reacting to this, (BJP) leader Shivraj Singh Chouhan said Congress is a sinking ship whose captain Rahul Gandhi is deserting it.