Pakistan Prime Minister Imran Khan on Monday formally invited Congress leader Navjot Singh Sidhu for the inaugural ceremony of the Kartarpur corridor, which will be held on November 9. In a letter by Pakistan High Commissioner Syed Haider Shah the invitation was extended. 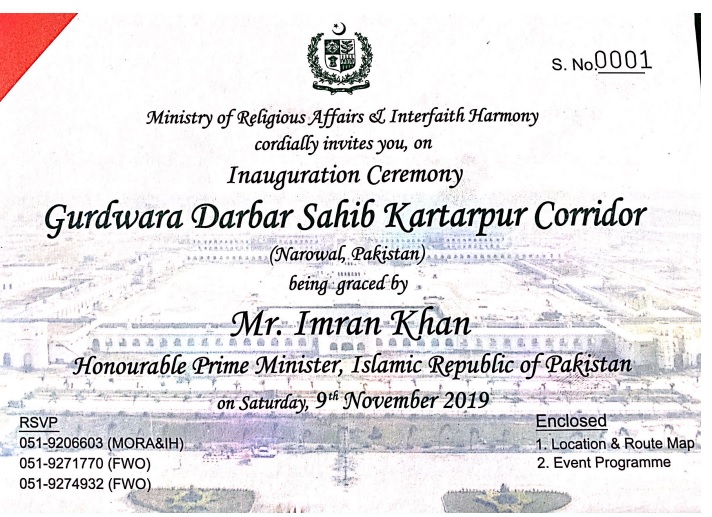 On Saturday, the former Punjab minister sought permission from the External Affairs Ministry to attend the ceremony. The cricketer-turned-politician also wrote a letter to Punjab Chief Minister Amarinder Singh, who forwarded it to the chief secretary for necessary action.

In a letter to External Affairs Minister S Jaishankar, Sidhu said he had been invited by the Pakistan government for the opening ceremony of the corridor, which will connect Darbar Sahib in Pakistan's Kartarpur with Dera Baba Nanak shrine in Gurdaspur district in Punjab .

"As a humble Sikh, it shall be a great honour to pay obeisance to our great Guru Baba Nanak on this historic occasion and connect to our roots," wrote Sidhu, who is a legislator from Amritsar East.

"Therefore, I may be permitted to visit Pakistan for this auspicious occasion," the former minister had said.

The corridor will facilitate visa-free movement of Indian pilgrims who will have to just obtain a permit to visit Kartarpur Sahib, located in Pakistan's Narowal district across the Ravi river.

Sidhu had come under fire from the opposition after he hugged Pakistan Army chief Gen Qamar Javed Bajwa during the swearing-in ceremony of Prime Minister Imran Khan in August last year.

Sidhu had then also claimed that Gen Bajwa had told him about "making efforts to open the Kartarpur corridor".

An official spokesperson said the Punjab chief minister had received Sidhu's letter seeking permission to visit the neighbouring nation and he immediately forwarded it to the state chief secretary.

Amarinder Singh said that along with all other MLAs, Sidhu had also been invited to join an all-party 'Jatha' going from Punjab to Kartarpur Sahib via the corridor on November 9.

The Amritsar DC had been pursuing the matter with Sidhu's office, but the latter had failed to respond, Amarinder Singh alleged.

The chief minister also lamented the "politicisation" of the Kartarpur corridor, saying it was in violation of the ideology of Sikhism founder Guru Nanak Dev, whose 550th birth anniversary is being celebrated this year.