Kashmir on edge: With more boots on ground, what lies ahead in panicked Valley?

Amid massive troop deployment, a midnight drama played out in Srinagar’s Gupkar, PDP president Mehbooba Mufti taking lead met her political rivals NC chief Farooq Abdullah, Sajad Lone and Shah Faesal. The delegation then left for Raj Bhawan to meet Governor Satya Pal Malik, urging him that New Delhi shouldn’t tinker with Jammu and Kashmir’s special identity. Lone who has advocated for the Bharatiya Janata Party (BJP) in the state said, "I will unconditionally support collective efforts for protecting the special status of J-K. I am ready to go to anyone and anywhere for supporting the collective efforts.”

In less than a week, Centre has decided to move additional 38,000 troops to the Kashmir Valley in two batches -- 10,000 and 28,000. This came after National Security Adviser (NSA) Ajit Doval returned from a two-day visit to the valley. The deployment has 50 companies of the Central Reserve Police Force, 30 of Sashastra Seema Bal and 10 each of the Border Security Force and the Indo-Tibetan Border Police. Each company comprises of 100 security personnel.

The government has now put the Air Force and Army on high operational alert. “For the rapid induction of CRPF and other paramilitary troops into the Kashmir valley, the government has pressed Indian Air Force aircraft including the C-17 heavy lift plane into service,” ANI reported. 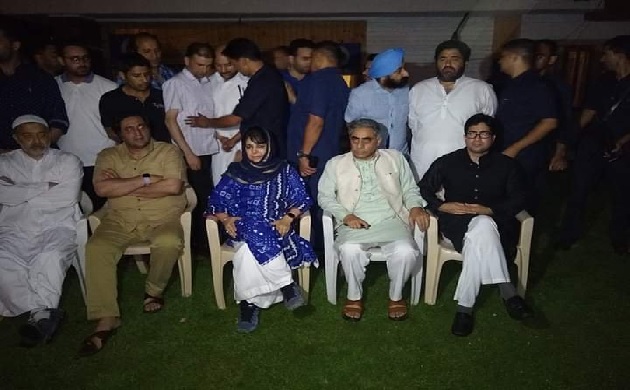 So, what can be the reasons behind Centre’s move? Here are all the speculations

Scrapping special status could be a part of the plan. Rumours grew after Union Home Minister Amit Shah’s pointed statement in Parliament that Article 370 “temporary in nature” and “not permanent” even though the matter is pending in court. The government has, however, said that additional troops have nothing to do Valley’s special status, these are precautionary measures in view of terrorist threats. J&K Governor Satya Pal Malik refuted such speculations. He said the people of the state should not pay heed to “rumours.”

Mehbooba Mufti reacting to this said, "some rumours going on that they will tinker with 35A. The way this state has enjoyed constitutional guarantee, it is under threat. People have sacrificed their lives to save their existence but if such things happen, people will rise against. I am not giving any threat."

There is speculation that Jammu and Kashmir may be bifurcated with Jammu being made a separate state while the Kashmir valley and Ladakh getting accorded the status of Union territories, according to a Times of India report.

Assembly Elections in Jammu and Kashmir

BJP summoned members of the party’s core group from Jammu and Kashmir for an ‘urgent meeting’ in Delhi on Tuesday. The 11-member party group from J&K was led by President Ravinder Raina. The party’s general secretary (Organisation) Ashok Kaul, who was part of the all-important meet said the members of the state unit were told in “categorical terms” to prepare for the state election.

The Jammu and Kashmir government on Friday asked Amarnath Yatris and tourists to immediately make necessary arrangements to cut short their stay in the Valley and return as soon as possible in the wake of intelligence inputs of "specific terror threats" to the pilgrimage. The Indian armed forces said that specific intel inputs have exposed Pakistan Army’s attempt to target the Amarnath Yatra.
Opposition leaders have, however, questioned the government on this “sudden” advisory. In a series of tweets, Omar Abdullah said, "The next time someone accuses a past elected government in J&K of mismanagement please remember we never allowed a situation to develop where the Amarnath yatra had to be cancelled, tourists had to be driven out or panic was allowed unchecked on the streets of the valley."