According To The CAA, Members Of Hindu, Sikh, Buddhist, Jain, Parsi And Christian Communities Who Have Come From Pakistan, Bangladesh And Afghanistan Till December 31, 2014 And Facing Religious Persecution There Will Not Be Treated As Illegal Immigrants

As Prime Minister Narendra Modi on Sunday slammed opposition parties over their protests to changes in citizenship law and the proposed National Register of Citizens in his rally at Ramlila Maidan, the audience cheered him loudly, virtually turning the congregation into one of endorsement to CAA and NRC. BJP is also set to conduct rallies and marches in various parts of the country in support of the citizenship law. Two separate rallies supporting and opposing the Citizenship Amendment Act (CAA) were held on Sunday evening in Pune city and nearby Pimpri-Chinchwad township.

According to the CAA, members of Hindu, Sikh, Buddhist, Jain, Parsi and Christian communities who have come from Pakistan, Bangladesh and Afghanistan till December 31, 2014 and facing religious persecution there will not be treated as illegal immigrants, and be given Indian citizenship.

I appeal to all of you let us work together at this juncture: Mamata Banerjee in letter to CMs and senior leaders of opposition parties amidst protests against CAA

Hundreds of people from various walks of life, including film personalities, take out protest march in Kochi against amended citizenship law.

104 arrested and over 12,000 booked in three districts of central Maharashtra over violence during anti-CAA protests last week: Officials

No need of fresh NRC in Assam, if Supreme Court allows 20 per cent reverification of names in it from border districts: Himanta Biswa Sarma

In name of those 'martyred' in CAA protests, we resolve to protect Constitution: Priyanka Gandhi

Congress leader Siddaramaiah at a hospital in Mangaluru to meet those who got injured during Citizenship Amendment Act protest.

Karnataka: Former Chief Minister & Congress leader Siddaramaiah at a hospital in Mangaluru to meet those who got injured during #CitizenshipAmendmentAct protest. pic.twitter.com/xbqnxrz9Xg

CAA does not violate Constitution, as claimed by a section of people: BJP working president JP Nadda.

Congress leaders Rahul Gandhi and Manmohan Singh read the Preamble of the Constitution, at Raj Ghat

Congress interim President Sonia Gandhi reads the Preamble of the Constitution, at Raj Ghat where the party is staging protest against Citizenship Amendment Act.

BJP Working President JP Nadda at a rally in Kolkata: Huge crowd here shows ppl are in support of Citizenship Act. West Bengal CM is just doing vote-bank politics by opposing the Act. She should see huge support for Act&understand that ppl have rejected vote-bank politics.

BJP Working President JP Nadda at a rally in Kolkata: Huge crowd here shows ppl are in support of Citizenship Act. West Bengal CM is just doing vote-bank politics by opposing the Act. She should see the huge support for the Act&understand that ppl have rejected vote-bank politics

Shops in and around Shivajinagar and Frazer Town area of Bengaluru are closed following bandh call for protest against Citizenship Amendment Act.

Bengaluru: Shops in and around Shivajinagar and Frazer Town are closed following bandh call for protest against Citizenship Amendment Act pic.twitter.com/NpzbVLyUoS

Youth League protest in front of post-offices in Kerala

Demanding the scrapping of the Citizenship Amendment Act, activists of the Youth League, the youth wing of the Indian Union Muslim League (IUML), on Monday organised protest-marches to post-offices in various parts of Kerala.

The protests against the amended Citizenship Act at the Jamia Millia Islamia entered its eight day on Monday, with hundreds continuing to throng the streets outside the university. Students from several schools in Noornagar, Batla House and Okhla also attended the protests on Monday.

The Jamia students, demanding withdrawal of the amendments in the law, questioned Prime Minister Narendra Modi's remark that his government has never discussed the National Register of Citizens (NRC) after coming to power for the first time in 2014.

In a massive embarrassment for Mamata Banerjee, the Calcutta High Court on Monday ordered the West Bengal government to take down all anti-NRC, CAA ads. The court asked the Trinamool Congress government to stop all advertisements that say the National Register of Citizens (NRC) and the Citizenship Amendment Act (CAA) will not be implemented in West Bengal. Read here...

Curfew imposed in some areas of Madhya Pradesh's Jabalpur city after violence during protests against the Citizenship (Amendment) Act was lifted on Monday.

31 arrested for violence during anti-CAA stir in UP's Rampur

Thirty-one people have been arrested and over 150 others identified for their alleged role in the violence that broke out here last Saturday amid protests against the Citizenship Amendment Act (CAA), police said on Monday.

A 22-year-old man had died of a bullet injury here on Saturday during the violence in which several locals and policemen were injured, and six vehicles, including a police motorcycle, were torched, the officials said.

Even as the police claimed that it had not opened fire on anti-CAA protestors here, a video has gone viral in which a sub-inspector is seen loading his pistol amid what sounded like gunshots. The 90-second video went viral on the social media in which a Khakhi-clad policeman with chest guard and helmet was seen loading his pistol during the protests against the amended Citizenship Act.

The video appeared to be from the Yateemkhana area, which witnessed violence during the anti-CAA protests. Both ADG, Zone Prem Prakash and IG Range Mohit Agarwal claimed that police did not resort to firing.

The speculation regarding police firing at protesters are not true, the ADG said.

Modi has come as God for migrants whose lives were not safe, who lived in an environment of instability and who used to say that they will die but will not return to Pakistan. They have got a new lease of life, the former Madhya Pradesh chief minister said at a press conference. 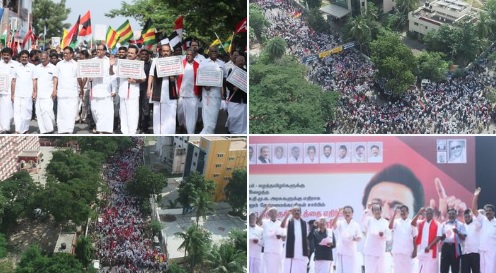 In a show of strength, the DMK and its allies on Monday took out a huge protest rally here against the amendment to the Citizenship Act and warned of intensifying the agitation by mobilising apolitical sections of society till the Centre withdrew the ‘draconian’ law. DMK president M K Stalin led the peaceful rally and leaders of alliance parties, including senior Congress leader P Chidambaram, walked alongside him holding placards against the contentious Citizenship Amendment Act. Read here...

BJP Working President JP Nadda arrives at Kolkata airport. He will lead a march today supporting the Citizenship Act and will address a gathering at Dharmatala Rani Rashmoni Road from where the march will begin and culminate at Swami Vivekananda's residence.

Students protesting outside UP Bhawan detained

Some students were detained outside the Uttar Pradesh Bhawan here on Friday when they were protesting against the police's action during anti-Citizenship (Amendment) Act demonstrations in the state.

They were demanding the resignation of Uttar Pradesh Chief Minister Yogi Adityanath over the issue. Police are yet to share details.

The district administration has constituted a special investigation cell to probe cases of violence during the protests against the amended citizenship law here, police said on Monday. The cell will comprise 18 police personnel, including 13 inspectors.

Superintendent of Police (Crime) R B Chaurasia said the special cell has started investigating 24 cases registered in connection with the violence on December 20.

Rahul Gandhi appeals to youths to join him at Rajghat protest

Congress leader Rahul Gandhi on Monday urged students and youths to join him at Rajghat to protest against the "hate and violence unleashed by Modi-Shah" and show that they will not allow India to be "destroyed by hatred".

"Dear Students and Youth of India, It's not good enough just to feel India. At times like these it's critical to show that you're India and won't allow India to be destroyed by hatred.

The Madras High Court has directed videographing of DMK's proposed rally against the Citizenship Amendment Act on Monday if the party goes ahead with it despite denial of permission by the police.

Security tightened in Chennai as DMK and its alliance parties are set to hold a 'mega rally' against Citizenship Amendment Act, today in the city.

The Organisation of Islamic Cooperation (OIC) on Sunday said it was "closely" following the recent developments "affecting" Muslims in India as it voiced concern over the Citizenship Amendment Act and the verdict in the Ayodhya case. The OIC is a 57-member grouping of Muslim majority nations, including Pakistan. The body has usually been supportive of Pakistan and often sided with Islamabad in its disputes with India. "The General Secretariat of the Organisation of Islamic Cooperation has been closely following recent developments affecting Muslim minority in India,” the OIC said in a brief statement. Read here...

'Amit Shah Won't Be Allowed To Step Out Of Kolkata Airport If…,' Bengal Minister's Open Challenge

West Bengal minister and state president of Jamiat-Ulema-e-Hind Siddiqullah Chowdhury on Sunday threatened to disallow Union Home Minister Amit Shah to step out of the airport whenever he visits the city, if the Citizenship Amendment Act is not immediately withdrawn. Chowdhury said the contentious law is against humanity and the citizens of the country "living here for ages". Read here...