The BJP Is Confident That The Proposed Citizenship (Amendment) Bill Will Be Passed By The House With A Comfortable Majority.

Union Home Minister Amit Shah on Wednesday moved the Citizenship Amendment Bill in the Rajya Sabha, saying that Indian Muslims “were, are and will remain Indian citizen". Moving the bill that provides Indian citizenship to non-Muslim migrants from Pakistan, Bangladesh and Afghanistan, Shah said minorities in the three nations do not get equal rights. The population of minorities in these countries has reduced by as much as 20 per cent, either by way of elimination or having migrated to India, he said, adding that these migrants did not get rights to jobs and education.

The bill provides citizenship to these persecuted minorities, Shah said. Several MPs of opposition parties moved a motion to send the Citizenship Amendment Bill to the select committee of the Upper House. The bill and the opposition motion will be put to vote after a debate on it.

Congress takes back their amendment.

Derek O Brien not to move his amendment.

Motion to send bill to Select Panel of Rajya Sabha REJECTED by 124-99.

Citizenship Amendment Bill not to move in Select Committee.

Government must accept that there is fear amongst minorities: Digvijay Singh to Amit Shah.

Christians are being mistreated in Pakistan. They are forced to live in extreme circumstances, says Amit Shah

It was asked that why were Rohingyas not included in the Bill? Rohingyas don't come to India directly, they go to Bangladesh and then infiltrate into India from there.

At times, I find the comments made by Congress party leaders and Pakistan similar: Amit Shah in Rajya Sabha.

Home Minister Amit Shah, in Rajya Sabha, on Citizenship Amendment Bil l2019: It was asked that why were Rohingyas not included in the Bill? Rohingyas don't come to India directly, they go to Bangladesh and then infiltrate into India from there.

Home Minister Amit Shah, in Rajya Sabha, on Citizenship Amendment Bill 2019: It was asked that why were Rohingyas not included in the Bill? Rohingyas don't come to India directly, they go to Bangladesh and then infiltrate into India from there.

Shiv Sena supported the bill in Lok Sabha yesterday, I want to know what happened overnight that they have now changed their stand: Amit Shah

India is a democratic country, we never stopped the process: Amit Shah.

The entire country knows that the reason behind partition was Jinnah and it was done due to his demand. But all I am asking is why did Congress agree to it? Why was it done on the basis of religion? Amit Shah.

Citizenship bill not to snatch anyone's Indian citizenship; Muslims have no need to fear or worry: Home Minister

'Don’t politicise the Bil. Government is not doing vote bank politics. We get mandate on our popularity', says Amit Shah.

Can followers of Islam in Bangladesh, Pakistan and Afghanistan be called minority? No. When the religion of the State is Islam, then, chances of persecution of Muslims is lesser.

Muslims not included for giving citizenship because proposed law is for persecuted minorities in Pakistan, Bangladesh, Afghanistan: Home Minister.

'Bill has 6 religious minorities mentioned. No appreciation for that. But surprised being criticized for not mentioning Muslims:' Amit Shah.

If this bill was brought 50 years ago, then the situation had not been so severe today: Union Home Minister Amit Shah in Rajya Sabha.

Under the Nehru-Liaquat agreement, both sides agreed that the people of minority societies would be given equality like the majority, their business, expression and freedom of worship would also be ensured, this promise was made to the minorities: Amit Shah.

'This Bill is inevitable, this Bill is a consequence of the partition that was done on religious lines’, says Amit Shah in Rajya Sabha.

Modi government is not here only to govern but also to change the face of the country: Amit Shah.

There was no need for this bill had Partition of India not taken place in 1947, says Home Minister Amit Shah.

Curfew declared in Guwahati from 6.15pm tonight to 7am tomorrow: Sources

The bill has been thoroughly reviewed and passed by the legal department, says Ravi Shankar Prasad at Rajya Sabha.

"What about the Lankan Tamils, Ahmadiyyas, and others who have been left out. The government is trying to hide the real agenda - to create a Hindu nation," says CPM's KK Ragesh opposing the bill.

Supreme Court has held in Hans Muller case that classification amongst foreigners does not run afoul of Article 14: Bhupender Yadav, BJP leader

Everyone is aware of persecution of religious minorities in neighbouring countries. But the Congress government did nothing to address the plight of these people: BJP's Bhupendra Yadav

Our country is governed by the Constitution and the Constitution is based on the principle of equality. We expect that Shiv Sena will keep this in mind while voting on #CitizenshipAmendmentBill2019 in Rajya Sabha, Congress leader Balasaheb Thorat

Religious groups in Pakistan, Afghanistan and Bangladesh have been singled out and oppressed. As far as Ahmadiyyas or Shias are concerned, they would prefer going to Iran or Bahrain to seek refuge, says BJP leader Subramanian Swamy.

The population of Hindus, Buddhists, Sikhs, Christians and Parsis living in Pakistan has seen a sharp decline since 1952: Subramanian Swamy.

1) Include Sri Lanka tamils
2) CAB Should not be linked to NRC
3) Allay fears of Muslim community: BJD's Sasmit Patra.

BJD supports Modi government's CAB, says people should not see this bill through a communal prism.

Government is trying to divide India, 'Vasudeva Kutumbakam' is the real essence of India: Sanjay Singh.

Vaiko, MDMK in Rajya Sabha, on Citizenship Ammendment Bill 2019: If this obnoxious, abominable, undemocratic, unreasonable, unpardonable, unjustifiable, unconstitutional Bill is passed today in this Council of State, it will become a black chapter in the annals of this Upper House.

This bill should be thrown into the Bay of Bengal: Vaiko in MDMK.

CAB is an assault on our country's equality, secularism: Vaiko in Rajya Sabha.

We have not done politics of appeasement: Saroj Pandey of BJP.

“How will you prove that a person is persecuted...there is no law to prove that": Congress' Kapil Sibal on Citizenship Amendment Bill.

Rise above politics. You are destroying the future of this country: Senior Congress leader Kapil Sibal to Union Home Minister Amit Shah in Rajya Sabha.

Savarkar and Jinnah were in agreement on two-nation theory: Kapil Sibal

Two Nation theory was perpetuated by sarvarkar, not by Congress: Kapil Sibal.

Satish Chandra Mishra, BSP: Our party opposes the Citizenship Amendment Bill 2019. Why are you violating Article 14 by excluding Muslims? Muslims being excluded is the sole problem of this entire act.

P Chidambaram, Congress in Rajya Sabha: This government is ramming through this Bill to advance its Hindutva agenda. This is a sad day. I am absolutely clear that this law will be struck off.

Dr. K Keshav Rao,Telangana Rashtra Samithi in Rajya Sabha: This bill challenges the very idea of India and negates every ideal of justice. This bill should be withdrawn.

Opposing the Bill TK Rangarajan of CPM accused the BJP of dividing the nation and declared that the party MPs will oppose the bill in the House.

The Janata Dal (United) is supporting the Citisenship (Amendment) Bill in the Rajya Sabha. Ram Chandra Prasad Singh says that the bill is not against the minorities.

"We support this bill. The bill is very clear, it gives citizenship to persecuted minorities from three of our neigbouring countries, but here debate is being done on our Indian Muslim brothers," Ram Chandra Prasad Singh says.

Javed Ali Khan,Samajwadi Party in Rajya Sabha: Our Govt through this Citizenship Amendment Bill and NRC is trying to fulfill the dream of Jinnah. Remember, in 1949 Sardar Patel had said 'we are laying the foundation of a truly secular democracy in India'. 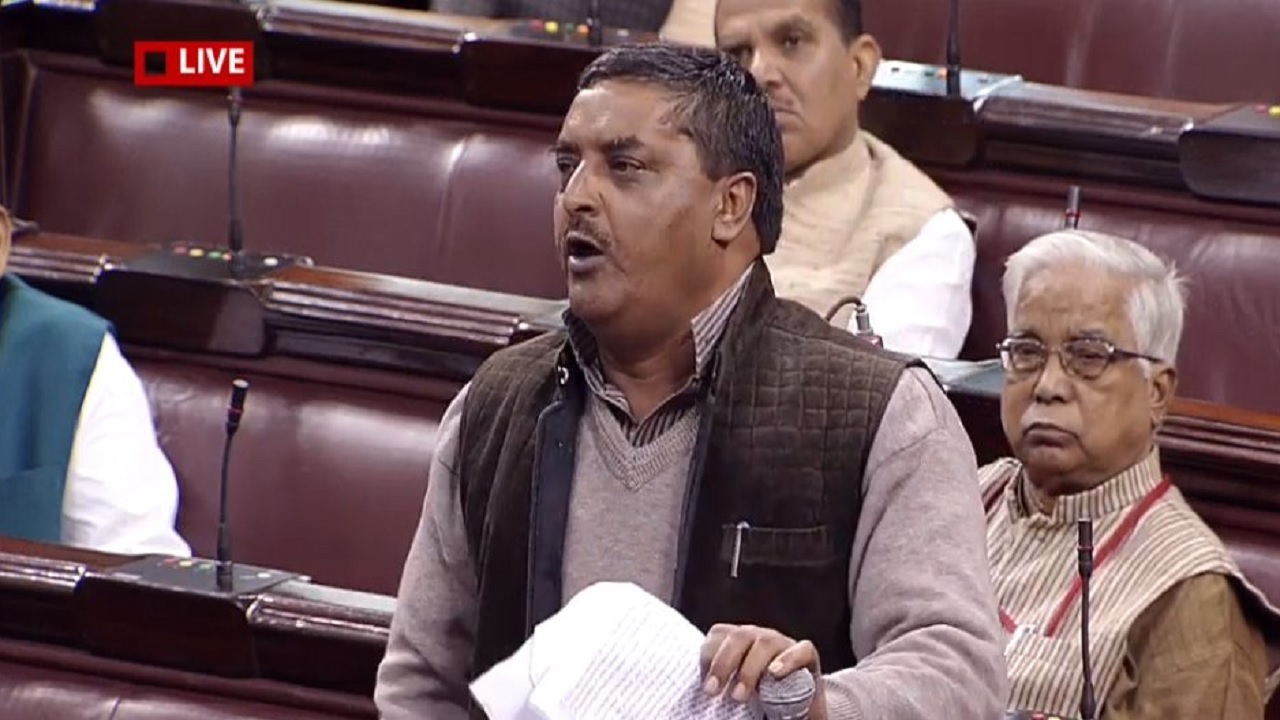 60 per cent of those put in detention camps are Bengali Hindus: Derek O'Brien

Trinamool Congress MP Derek O'Brien: 84 years ago, Nazi Germany passed a law and today what we are doing the same.

Derek O’Brien of the Trinamool Congress takes on Amit Shah.

Manmohan Singh in Rajya Sabha said to then Deputy PM Advani that we should have more liberal approach in granting citizenship to minorities of Bangladesh. So, we are following what he said: JP Nadda 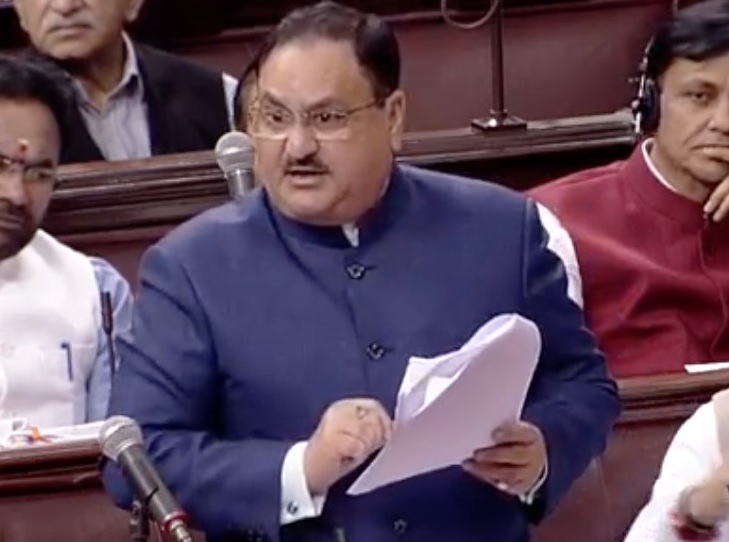 Ministry of Home Affairs extends Inner Line Permit (ILP) to Manipur and other parts of the North East.

In our religion, we believe in rebirth,and that we meet our elders. So if Sardar Patel meets Modi ji then he will be very angry with him, Gandhi ji will ofcourse be sad, but Patel will be indeed very angry.

"Whenever there have been amendments, religion has never been made a basis. Article 14 ensures equality before law. Citizenship Amendment Bill fails the constitutionality test," Anand Sharma.

There will be no lunch break today in Rajya Sabha today.

We have given shelter to people who came over from Pakistan post partition. Two among them have been our PMs. Dr Manmohan Singh and IK Gujral: Anand Sharma

Congress' Anand Sharma demands that the Citizenship Bill be sent to Parliamentary committee. 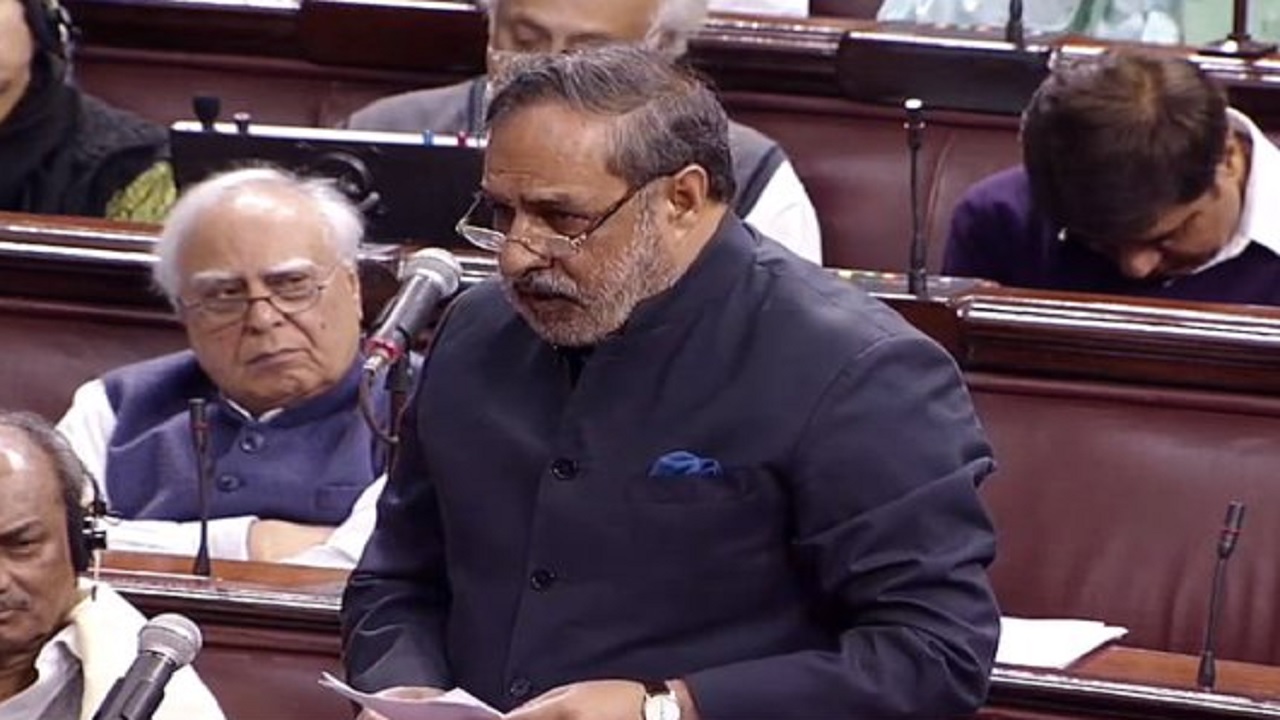 In 1985, Assam accord happened. There is a provision in clause 6 to protect indigenous culture of the state. I want to assure that NDA Government through committee to supervise clause 6 will protect rights of Assam. All Assam Students' Union is part of committee.

We have brought provisions to protect the rights of the states of the Northeast: Home Minister Amit Shah

Misinformation has been spread that this bill is against Muslims of India. I want to ask the people saying this that how is this bill related to Indian Muslims? They are Indian citizens and will always remain, no discrimination against them. 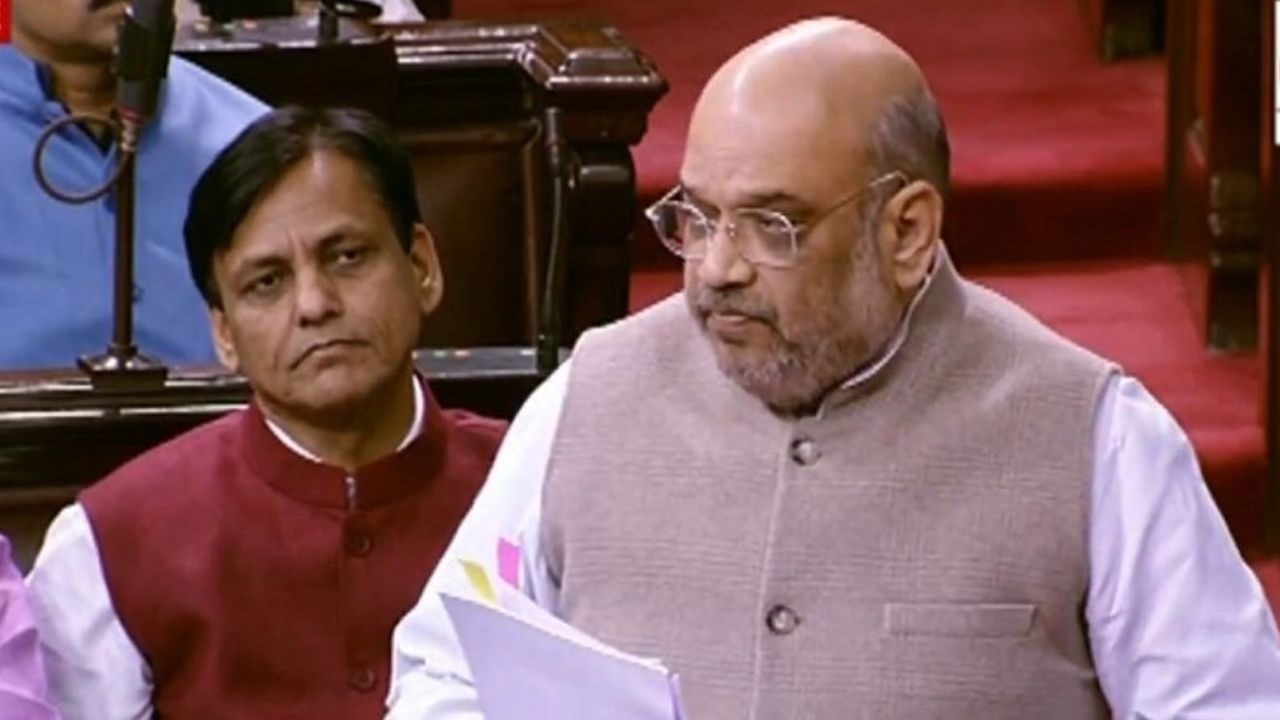 The Citizenship Amendment Bill 2019 gives citizenship to refugees who have had centuries of cultural affinity with Indian ethos: BJP

Home Minister Amit Shah in Rajya Sabha: There has been an almost 20% decline each in population of religious minorities in both Pakistan and present day Bangladesh. Either they were killed or they fled to India for shelter.

The Bill is part of BJP's promise before Lok Sabha Elections.

"This Bill is in order, there is no reason to demand reconsider debate on this Bill. The Lok Sabha has passed this Bill, and I have seen the legislation and it's in order," says Venkaiah Naidu. 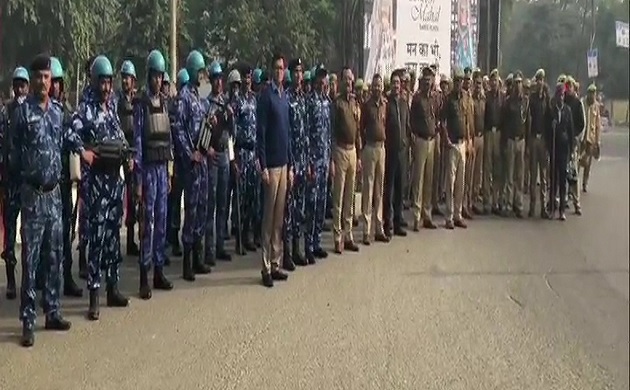 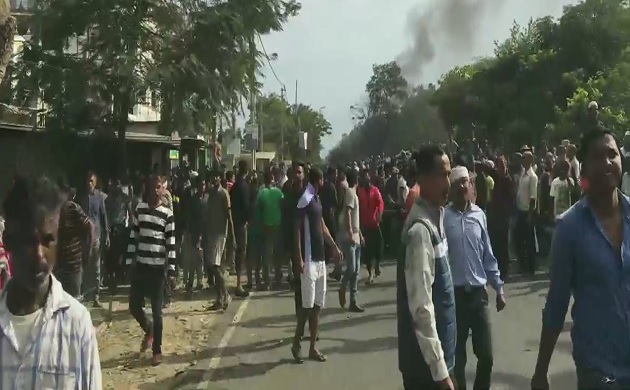 BJP working president JP Nadda will be opening the debate in Rajya Sabha. Bhupendra Yadav, Vinay Sahasrabuddhe will be among the speakers.

We have to clear our doubts on this bill, if we don't get satisfactory answers then our stand could be different from what we took in Lok Sabha. 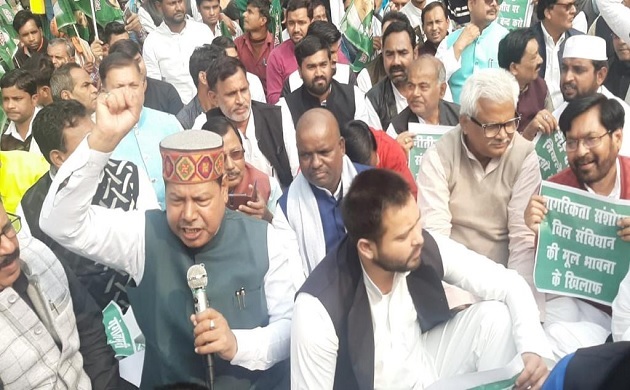 The Citizenship Amendment Bill will be tabled in Rajya Sabha at 12 pm today, and it will be passed in the house with comfortable majority.

Among the Opposition leaders who will speak during Citizenship Amendment Bill debate in Rajya Sabha, are Kapil Sibal from Congress, Derek O'Brien from Trinamool Congress and Ramgopal Yadav from Samajwadi Party.

Here's How The Numbers Stand in Rajya Sabha

After a smooth sailing in the Lok Sabha, the contentious Citizenship (Amendment) Bill is expected to face a sterner test on Wednesday when it will be taken up for discussion in Rajya Sabha. Read here...