Poll of exit polls: Congress ahead in Rajasthan, Chhattisgarh, close contest in MP

News Nation Brings You One Of The Most Accurate Exit Polls To Predict The Possible Outcome Of The Elections. You Can Watch The Results Of The News Nation Exit Poll On News Nation TV As Well As On Our Website At 5:00 Pm, Right After The Voting Ends.

With the voting in Rajasthan and Telangana, the most-talked about election season comes to an end on Friday. Besides these two states, the people of Chhattisgarh, Madhya Pradesh and Mizoram have cast their votes in their assembly elections concluded recently. The results for all the five states will be out on December 11. But before that, News Nation will bring you one of the most accurate exit polls to predict the possible outcome of the elections. You can watch the results of the News Nation exit poll on News Nation TV as well as on our website at 5:00 pm, right after the voting ends.

In Rajasthan, will the people of the state repeat its decades-long history of voting the incumbent out or the Vasundhara Raje-led BJP will break the jinx and retain power? Before the election commission’s official results, we will bring you an insight into people’s mind through our exit poll conducted across the state’s 200 Assembly constituencies. The exit poll results will also tell you whether it’s Vasundhara Raje once again or Sachin Pilot or former CM Ashok Gehlot whom the voters want to see as their new chief minister.

In Telangana, K Chandrasehar Rao is eyeing a second term as chief minister in the youngest state of the country. The voting for all the 119 seats were held on Friday. In the 2014 Assembly elections, the Telangana Rashtra Samithi (TRS) won a simple majority in the House winning 63 seats. The Congress, despite having formed the State, and consequently lost in the neighbouring residual Andhra Pradesh, won only 21.

In Madhya Pradesh, will BJP's Shivraj Singh Chouhan survive or Congress under Kamal Nathand Jyotiraditya Scindia oust him? Chief Minister Shivraj Singh Chouhan is battling the anti-incumbency of BJP's 15-year rule in the state. The Assembly elections to the 230-member strong Assembly was held on November 28.  Shivraj Singh Chouhan has been ruling the state since 2005, while the BJP has been in power since 2003. The party had stormed to power in 2003 under the leadership of Uma Bharti. The Congress was in power with Digvijaya Singh as its chief minister from 1993.

Will BJP's 'Çhaawal Wale Baba' Raman Singh create history in Chhattisgarh or Congress stop his juggernaut? Will former chief minister Ajit Jogi be a kingmaker in the state? Chief Minister Raman Singh, like his counterpart Madhya Pradesh Chief Minister Shivraj Singh Chouhan, is also facing the anti-incumbency of BJP's 15-year rule in Chhattisgarh. The Assembly elections to the 90-member strong Assembly was held in two phases on November 12 and 20. The Bharatiya Janata Party (BJP) and the Congress are the two main parties in the state but the state has witnessed a triangular contest this time with the emergence of Ajit Jogi-BSP alliance. The party had stormed to power in 2003 and ousted then Congress chief minister Ajit Jogi. In 2013, the BJP was able to come back to power for the third consecutive term. The party had won 49 seats with 41.04 per cent of votes. The Congress had won 39 seats with 40.29 per cent of votes. The difference between the two parties was just 0.75 per cent of votes.

In Mizoram, which went go to polls on November 28, the main contest is between the incumbent Congress, the main opposition Mizo National Front (MNF), the Zoram People's Movement (ZPM) and the BJP.

In the 2013 Assembly Elections in Mizoram, the Congress party had won 34 seats. The MNF had won five, while the Mizoram People’s Conference had claimed victory in the remaining one seat (Mizoram Legislative Assembly has 40 members). 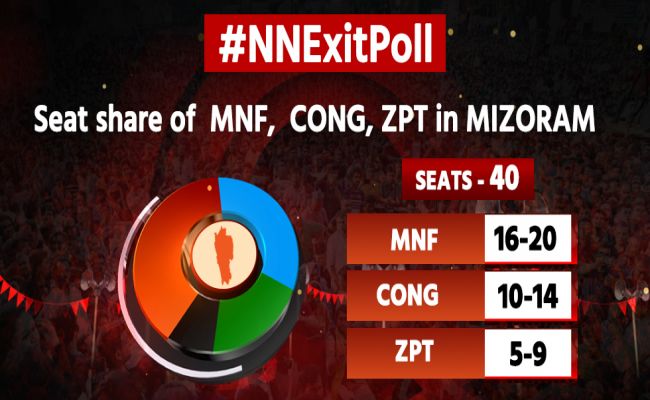 07.00 pm: According to the post-poll survey conducted by Prabodhan, TRS will emerge as the single largest party with 59 seats against Congress-TDP alliance' 42 seats.

06.55 pm: KCR's Telangana Rashtra Samithi is likely to emerge as the single largest party in a neck-and-neck fight with the Congress-TDP alliance. The TRS is predicted to get 53-57 seats as against Congress-TDP's 51-55 seats.