LIVE | Madhya Pradesh Crisis: Political Instability Continues To Emerge From Madhya Pradesh Where The Resignation Of Jyotiraditya Scindia Has Plunged The State Into Chaos. Scroll Down News Nation's Blog For All The Key Developments From The State.

Madhya Pradesh Crisis LIVE: Jyotiraditya Scindia is likely to be sent to the Rajya Sabha and he may get a berth in the Union cabinet if his rebellion against the Congress leads to the collapse of the Madhya Pradesh government, as the BJP assumes. (Photo Credit: Facebook)

Political instability continues to emerge from Madhya Pradesh where the resignation of Jyotiraditya Scindia has plunged the state into chaos. Scindia quit the Congress after a meeting with Prime Minister Narendra Modi and may join the BJP as the saffron party set in wave its strategy to tumble the Kamal Nath government to seize power there. Scindia, a leading Congress member for years, drove to the house of Union Home Minister Amit Shah. The two leaders then went to the prime minister's residence where they held discussions for over an hour.  Soon after his consultation with Modi, the former Congress Leader gave his resignation to party’s interim president Sonia Gandhi, stating it was now time for him to move on.

Scindia is likely to be sent to the Rajya Sabha and he may get a berth in the Union cabinet if his rebellion against the Congress leads to the collapse of the Madhya Pradesh government, as the BJP assumes.

Here are the highlights

We are waiting to see what happens in Madhya Pradesh. People have faith in Kamal Nath Ji's abilities: NCP Chief Sharad Pawar

Imarti Devi, recently resigned Congress MLA from Madhya Pradesh: All 22 MLAs are here (in Bengaluru) on their own will. We're happy Scindia ji has taken this decision. I'll always stay with him even if I had to jump in a well. When we were in Congress,Kamal Nath ji never heard us pic.twitter.com/rz8hqIJSgj

Very happy today. Govt will be formed under Shivraj Singh Chouhan's leadership. We're happy as I've worked under him&I know what wonderful schemes we had for people & today we don't have those. Best wishes to my nephew, hope we'll have a good aunt-nephew combination: Yashodhara Scindia

If there was anyone in Congress who was popular, it was 'Maharaj' (Jyotiraditya Scindia) so we used to say 'Maaf Karo Maharaj'. Ab Maharaj aur Shivraj ek hain, BJP mein: Shivraj Singh Chouhan, BJP on party's slogan “Hamara neta Shivraj, Maaf karo Maharaj” during state election.

It's a joyous day for BJP & me personally. Today, I remember Rajmata Scindia ji. Jyotiraditya Scindia has become a member of BJP family. Yashodhara ji is here with us. Entire family is with BJP. They have a tradition where politics is a medium to serve people: Shivraj Singh Chouhan

If Rajmata Sahab was here today, she would be elated to see you put the #NationFirst.

I admire your strength of character and courage. It’s good to be on the same team.

Over 80 Congress MLAs from Madhya Pradesh arrived at the Jaipur airport around 2.30 pm in a special flight from Bhopal.

Jyotiraditya Scindia: I can say with confidence that the aim of public service is not being fulfilled by that party (Congress). Besides this, the present condition of the party indicates that it is not what it used to be.

Jyotiraditya Scindia: There have been 2 life changing events for me - one, the day I lost my father and the second, yesterday when I decided to choose a new path for my life...The Congress party is not anymore the party that it was earlier.

Jyotiraditya Scindia: I would like to thank JP Nadda ji, PM Narendra Modi, Home Minister Amit Shah that they invited me to their family and gave me a place in it.

BJP president JP Nadda tells Jyotiraditya Scindia: "BJP is a very democratic party and everyone has a say in the party. I want to assure you that you will be given a prominent role with us."

#WATCH Jyotiraditya Scindia leaves from his residence in Delhi. pic.twitter.com/AtYsgYs3jq

Jyotiraditya Scindia leaves from his residence in Delhi. pic.twitter.com/1QWk0Tfk9b

Congress MLAs on way to Jaipur. 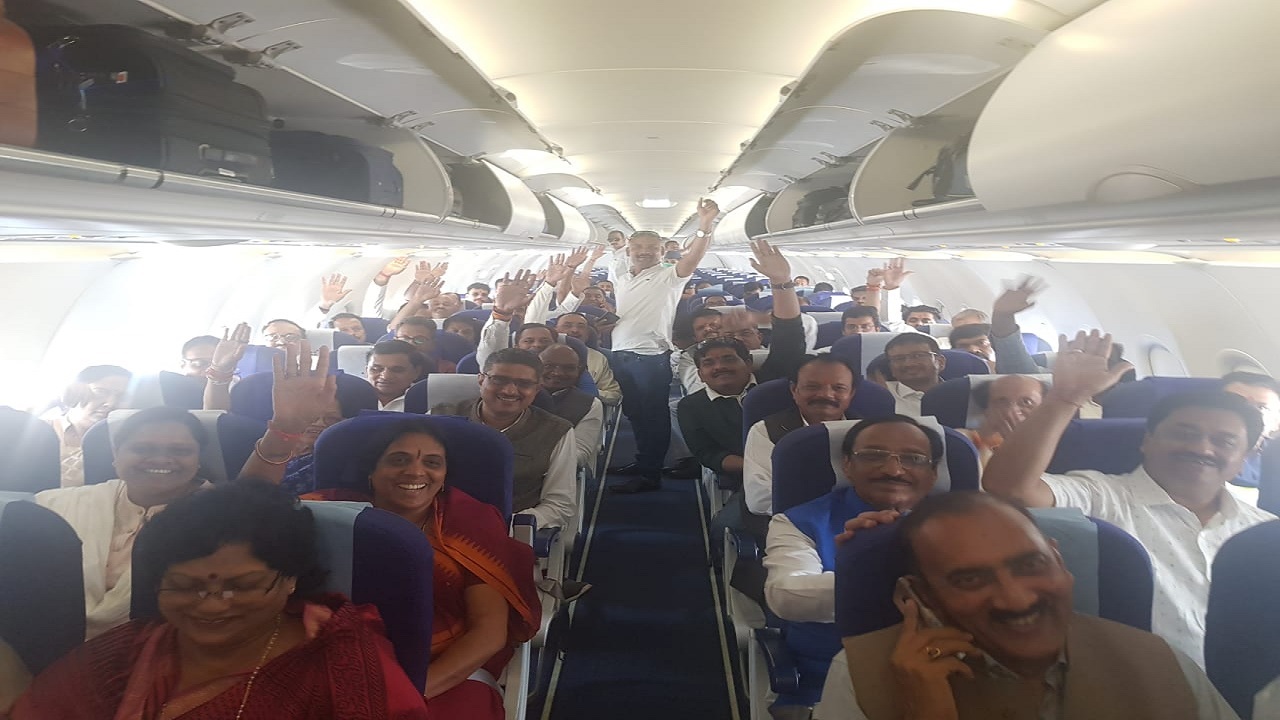 Madhya Pradesh crisis: What we know so far – 10 points

Congress leader DK Shivakumar in Bengaluru: No one can destroy Congress. Leaders may come, leaders may go, that doesn't make any difference. All the MLAs (Madhya Pradesh) who are here don't want to lose their membership. I am sure they will understand, go back and save the govt.

Over 80 Congress MLAs from Madhya Pradesh to arrive in Jaipur soon: Sources

Amid the political crisis in Madhya Pradesh, over 80 Congress MLAs from the state are expected to arrive in Rajasthan on Wednesday afternoon, sources said.

Taking a dig at political developments in Madhya Pradesh, Shiv Sena leader Sanjay Raut on Wednesday his party-led Maharashtra government is safe and that the virus will not enter the western state... Read Here

Senior Madhya Pradesh Congress leader Sajjan Singh Verma on his meeting with 19 party MLAs who tendered their resignations: Nobody is ready to go with Scindia ji. They said they were misled and taken to Bengaluru, most of them said they are not ready to join BJP.

Congress MP Nakul Nath (son of Madhya Pradesh CM Kamal Nath): MLAs who have gone to Karnataka will soon return to the Congress fold. I am very confident the government will survive.

Madhya Pradesh: Congress MLAs leave for Bhopal airport. They will be flying to Jaipur shortly. pic.twitter.com/jXBfbGYDPO 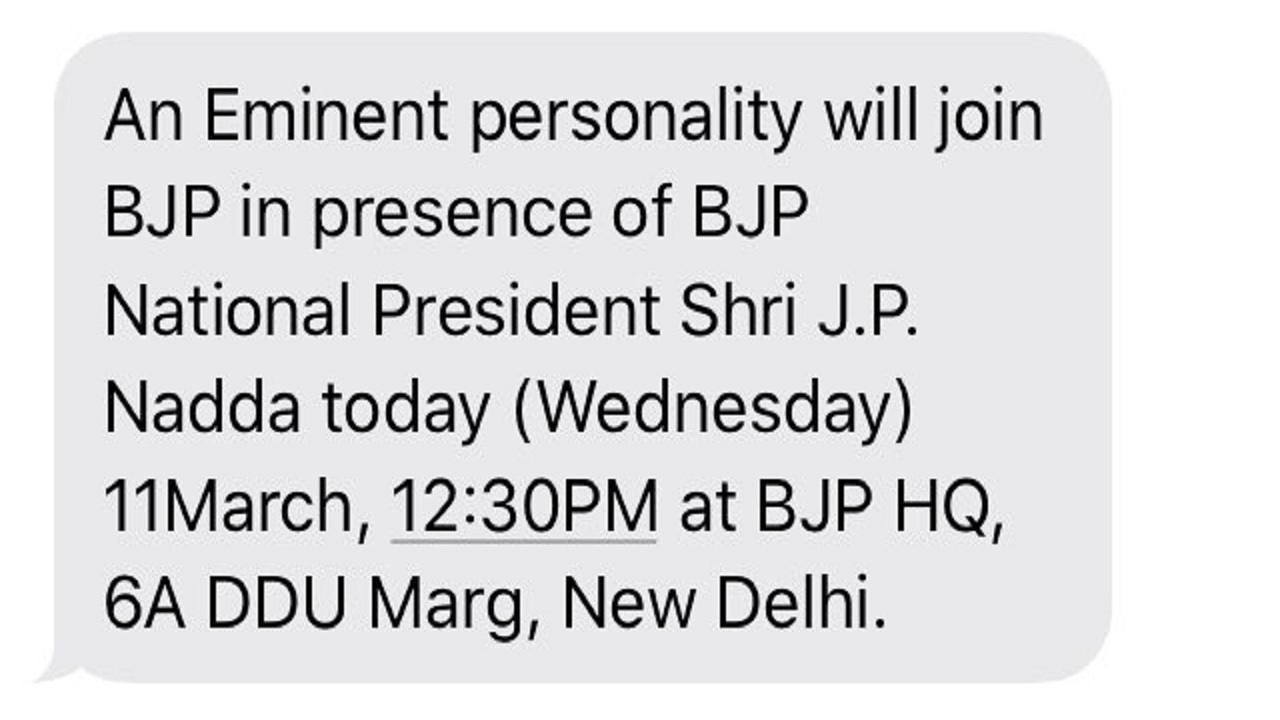 'Most will return': DK Shivakumar says in touch with rebel Congress MLAs.

Madhya Pradesh Home Minister, Bala Bachchan: Congress is in a safe & strong position. Everybody is in touch with Chief Minister, everything will be alright soon. We will prove majority on the floor of the assembly and our government will continue till 2023.

Digvijaya Singh says nothing in Chambal division moved without Jyotiraditya Scindia's consent in the last 16 months. "No question he was not at all sidelined. In fact, please ask any Congress Leader from MP particularly from Gwalior Chambal Division and you would come to know nothing moved in this area without his consent in the last 16 months. Sad. But I wish him well under ModiShah Tutelage (sic)!" he tweeted.

Madhya Pradesh Congress MLA Arjun Singh: Congress and Kamal Nath's government will remain. You will see on 16th, numbers (of MLAs) will stay the same. Him (Jyotiraditya Scindia) leaving doesn't affect anything, days of Rajas-Maharajas are long gone.

Jyotiraditya Scindia was not at all sidelined, says Congress leader  Digvijaya Singh.