Chidambaram's dramatic appearance and CBI's endeavor to arrest him: As it Happened

Soon After P Chidambaram's Dramatic Appearance Before The Media, A Team Of CBI Reached Congress Headquarters To Arrest Him.

Former finance minister and senior Congress leader P Chidambaram was arrested by the CBI soon after his dramatic appearance before media at Congress headquarters on Wednesday. The Congress leader, who was accused by the BJP of evading arrest, said that if he has to choose between the liberty and the life, he will always choose liberty.

"I was aghast that I was accused of hiding from the law. On the contrary, I was engaged in pursuit of justice," Chidambaram said at a press conference. "Now I shall walk with a clear conscience and head held high. In the name of freedom, I can only hope and pray that investigative agencies will respect the law," he added.

He was not seen after the Delhi High Court denied him interim protection from arrest in the case pertaining to alleged corruption in INX Media case. Soon after his dramatic appearance before the media, a team of CBI rushed to the Congress headquarters in Delhi to arrest him but he left from there before they reached. From there, the Congress leader went to his residence. However, a team of CBI followed him there as well and finally arrested him.

#10:20 pm: CBI formally arrests P Chidambaram in INX Media case. He is likely to be produced before the CBI Rouse Avenue Court, tomorrow.

#09:46 pm: BREAKING News: Senior Congress leader and former finance minister P Chidambaram has been arrested by the CBI from his residence after high-voltage drama.

#WATCH P Chidambaram taken away in a car by CBI officials. #Delhi pic.twitter.com/nhE9WiY86C

#09:35 pm: Police removing supporters of P Chidambaram, who are protesting against the CBI action. They are being forcefully remvoed by the police personnel.

#09:25 pm: Clashes broke out outside P Chidambaram's residence. Two people, reportedly BJP workers, were thrashed by the supporters of P Chidambaram. They had raised slogans against the former finance minister, who is accused of corruption in the INX Media Case.

#09:20 pm: Karti Chidambaram, son of P Chidambaram tweets: "The drama and spectacle being enacted by the agencies is to simply sensationalise and satisfy the voyeuristic pleasure of some." 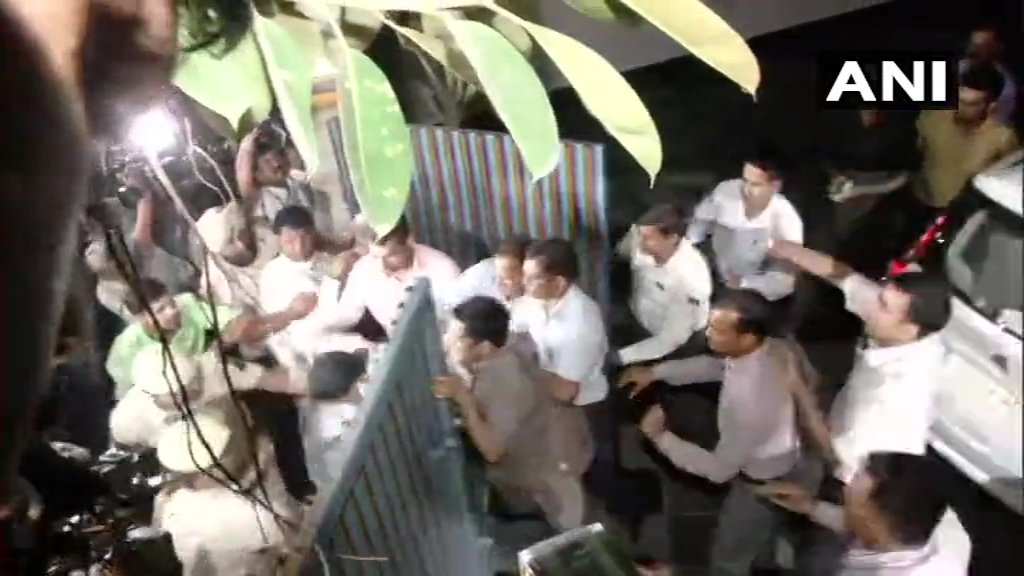 #09:00 pm: A team of CBI has reached Chidambaram's residence at Hauz Khas area in Delhi. They jumps the wall of his house to enter as the main gate was not opened for them.

#WATCH Delhi: A Central Bureau of Investigation (CBI) official jumps the gate of P Chidambaram's residence to get inside. CBI has issued a Look-Out Notice against him. pic.twitter.com/WonEnoAgR4

#08:50 pm: Supporters of P Chidamabaram have gathered outside his residence. They are raising slogans against the Narendra Modi government.

#08:45 pm: A team of CBI and Enforcement Directorate have reportedly left for Chidamabaram's residence to arrest him.

#08:38 pm: P Chidamabaram has arrived at his residence after addressing a dramatic press conference at Congress headquarters.

#08:35 pm: P Chidamabaram has left the Congress headquarters. CBI could not arrest him. He is said to be headed to his residence in Hauz Khas.

#08:24 pm: Lies have been spread by pathological liars. There is not chargesheet has been filed by the CBI of the ED. Moreover, In theFIR, it has not been mentioned that I, or my son has committed any wrongdoings: P Chidambaram

#08:22 pm: On my behalf, lawyers and my friends moved the top court. They urged the CJI for urgent hearing and interim protection. While they were moving the court, we prepared papers last night, completed the task this morning. I was working alongside them. I was aghast that I was accused of hiding from law, on the contrary, I was seeking protection of the law: P Chidambaram

#08:20 pm: I was accused of running away from justice, on the contrary I was in pursuit of justice: P Chidambaram

The ED has also issued a fresh lookout circular against him in connection with the INX Media money laundering case. The Enforcement Directorate (ED) has put out a lookout circular for Chidambaram, who has not been seen since the High Court denied him protection from arrest on Tuesday, after which the CBI visited his home in Delhi twice.

Earlier in the day, Chidambaram failed to get immediate relief from the Supreme Court as the CJI bench will hear the petition, seeking protection from arrest in the INX media scam cases, on Friday. Chidambaram, who was home minister and finance minister in the UPA government from 2004-2014, has sought a stay on the Delhi High Court's judgment dismissing his anticipatory bail plea.

His petition was first mentioned by senior advocate Kapil Sibal on Wednesday morning before a bench, comprising Justices NV Ramana, M Shantanagoudar and Ajay Rastogi, which sent it for being placed before the CJI for his consideration to accord it urgent hearing.

When the team of lawyers representing Chidambaram did not receive any information on urgent listing, Sibal once again mentioned it before the same bench after it assembled post lunch.

Sibal, flanked by other senior advocates Vivek Tankha and Indira Jaising, told the bench that the investigating agencies have issued a look out notice against Chidambaram as if he is going to "run away". The top court said the defects in the petition had been removed "just now" and it "cannot be listed for hearing today itself".