Prime Minister Shri @narendramodi Will Be Addressing The Nation At 8 PM Today, The Prime Minister's Office Said In A Post On Twitter.

Prime Minister Narendra Modi on Thursday addressed the nation. This came days after Parliament passed a resolution revoking certain provisions of Article 370 which granted special status to Jammu and Kashmir, and passing a bill that bifurcates the state into two union territories. "Prime Minister Shri @narendramodi will be addressing the nation at 8 PM today," the Prime Minister's Office said in a post on Twitter.

Highlights of the address:

8.35 pm: Come, let us all build together a new Jammu and Kashmir and new Ladakh with the New India: PM Modi.

8.33 pm: This decision will support the economic progress of Jammu and Kashmir and Ladakh as well as the whole of India. When peace and prosperity will come in this important part of the world, then efforts for world peace will be strengthened: PM Modi.

8.31 pm: I thank the companions of the security forces deployed for the security of the people of Jammu and Kashmir. The manner in which the people associated with the administration, the state employees and the Jammu and Kashmir Police are handling the situation is praiseworthy. This diligence of yours has increased my belief that change can happen: PM Modi.

8.29 pm: I assure the colleagues of Jammu and Kashmir that gradually the situation will become normal and their troubles will also get reduced. The Eid Mubarak festival is also close by. I wish all the best for Eid: PM Modi.

8.28 pm: We should also not forget that the patriotic people of Jammu and Kashmir have stood firmly against the Pakistani conspiracies to promote terrorism and separatism: PM Modi.

8.27 pm: Freedom from Article 370 is a fact, but the truth is also that the problems that are happening due to the steps taken as a precaution at this time are also being faced by the same people. A handful of people who want to spoil the situation there, Local people are also giving them answers: PM Modi.

8.26 pm: I also want to tell every countryman that the concern of the people of Jammu and Kashmir and Ladakh, we are all concerned, we are no different from their happiness, sorrow and their suffering: PM Modi.

8.24 pm: It is also very natural in a democracy that some people are in favor of this decision and some have differences over it. I respect their differences as well as their objections. The central government is also responding to the debate on it. This is our democratic responsibility: PM Modi. 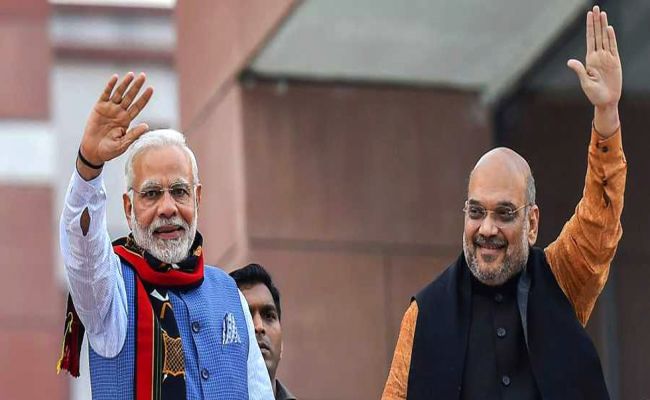 8.23 pm: Now the innovative spirit of the youth of Ladakh will be encouraged, they will get better institutions for good education, people will get good hospitals, Infrastructure will be further modernized: PM Modi.

8.22 pm: Ladakh has the potential to become the biggest center of Spiritual Tourism, Adventure Tourism and Ecotourism. Ladakh can also become a major center of solar power generation. Now there will be proper use of its potential and new opportunities will be created for development without discrimination: PM Modi.

8.21 pm: The development of the people of Ladakh, after the formation of the Union Territory, is the special responsibility of the Government of India. With the help of local representatives, development councils of Ladakh and Kargil, the central government will now get the benefit of all the development plans faster: PM Modi.

8.20 pm: The color of saffron or the taste of coffee is from Jammu and Kashmir, be it the sweetness of the apple or the succulence of the apricot, be it Kashmiri shawls or artefacts, be it Organic Products of Ladakh or Herbal Medicine, it needs to be spread worldwide: PM Modi.

8.17 pm: I am confident that the people of Jammu and Kashmir will achieve their goals with renewed vigor in an environment of good governance and transparency: PM Modi.

8.16 pm: I am confident that after the removal of Article 370, when these Panchayat members get a chance to work in the new system, they will do wonders. I am confident that the people of Jammu and Kashmir will defeat separatism and move forward with new hopes: PM Modi.

8.15 pm: Just as panchayat elections were conducted with transparency, Assembly elections will also be held in the same manner. I would also urge the Governor of the state that the formation of the Block Development Council, which has been pending for the last two-three decades, should also be completed at the earliest: PM Modi.

8.13 pm: We all want the Jammu and Kashmir Assembly elections to be held in the coming times, form a new government, become the chief minister. I assure the people of Jammu and Kashmir that you are very sincere, you will get an opportunity to choose your representative in the whole transparent environment: PM Modi

8.12 pm: These are the people who came to India from Pakistan after Partition. Will injustice continue with these people like this?: PM Modi.

8.11 pm: You will be shocked to know that for decades, thousands of such siblings have lived in Jammu and Kashmir who had the right to vote in the Lok Sabha elections, but they could not vote in the assembly and local body elections: PM Modi.

8.10 pm: We have tried to bring a new work culture, transparency in the Jammu and Kashmir administration. The result of this is that IIT, IIM, AIIMS, be all irrigation projects, be it power projects, or the Anti Corruption Bureau, the work of all these has increased: PM Modi.

8.09 pm: Soon the process of filling the vacant posts of central and state in Jammu and Kashmir and Ladakh will be started. This will provide employment opportunities to the local youth. Center's public sector units and private sector companies will also be encouraged to provide jobs: PM Modi

8.07 pm: Minimum Wages Act is implemented to protect the interests of workers in other states of the country, but in Jammu and Kashmir it was available only on paper: PM Modi.

8.06 pm: In other states of the country, the Minority Act is in force to protect the interests of minorities, but this was not the case in Jammu and Kashmir: PM Modi.

8.06 pm: "There were obstacles to the development of the people of Kashmir all these years. Our efforts have removed those hindrances," says PM Modi in address to nation.

8.05 pm: No one talked of the difficulties faced by the people of J&K and the youth because of Article 370 and 35A: PM Narendra Modi. 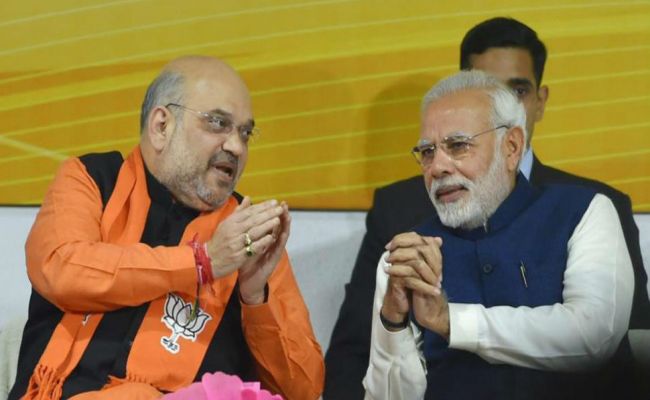 8.04 pm: ''I congratulate people of Jammu and Kashmir, Ladakh and the whole nation": PM Modi.

8.03 pm: Some things in social life get so mixed with time that many times those things are considered permanent. It is understood that, nothing will change, it will work like this: PM Modi.

8.02 pm: There was a similar sentiment with Article 370. There was no discussion of the loss of our siblings in Jammu and Kashmir and Ladakh. Surprisingly, if we talk to anyone, no one could even tell what was the benefit of Article 370 in the lives of the people of Jammu and Kashmir: PM Modi.

8.01 pm: As a nation, as a family, you, we, the whole country have taken a historic decision. Such a system, due to which our siblings of Jammu and Kashmir and Ladakh were deprived of many rights, which was a major hindrance in their development, they have now gone away: PM Modi.

8.00 pm: The dream was of Sardar Patel, of Babasaheb Ambedkar, of Dr. Syama Prasad Mukherjee, of Atal ji and crores of patriots, it is now fulfilled: PM Modi.

8.00 pm: “A new era has started for Jammu and Kashmir and Ladakh,” says PM Modi.

8.00 pm: PM Narendra Modi begins his address to the nation.

A speech full of facts that reflects aspirations of our brothers and sister from the Ladakh region. @MPLadakh

7.00 pm: Ready to review decision against India if New Delhi agrees to reconsider its actions on Kashmir: Pakistan

6.10 pm: National Security Advisor (NSA) Ajit Doval on Wednesday undertook a whirlwind visit to the militancy-infested south Kashmir and assured the locals that their security is the government's responsibility.

6.08 pm: Pakistan said that Kashmir has been on the agenda of the UN Security Council as a "disputed territory" as it rejected India's contention that Jammu and Kashmir is its internal matter.

6.07 pm: Several BJP leaders have took to Twitter and urged countrymen not to miss today's broadcast.

#WATCH Punjab: Samjhauta Express arrives from Pakistan, at Attari railway station. Railway crew & guard from India had gone with a train engine to Pakistan today after receiving a message from them that their driver & crew had refused to come to India. pic.twitter.com/MzGW1xaysu

6.05 pm: Pakistan stopped the Samjhauta Express at the Wagah border, citing security concerns, following which an Indian crew and guard escorted the train to Attari on the Indian side.

6.04 pm: “Special congratulations to the people of Ladakh! It is a matter of great joy that their long-standing demand of being declared a Union Territory has been fulfilled. This decision will give impetus to the overall prosperity of the region and ensure better developmental facilities,” the prime minister said.

The Bills pertaining to Jammu, Kashmir and Ladakh will ensure integration and empowerment. These steps will bring the youth into the mainstream and give them innumerable opportunities to showcase their skills and talents. Local infrastructure will significantly improve.

I salute my sisters and brothers of Jammu, Kashmir and Ladakh for their courage and resilience. For years, vested interest groups who believed in emotional blackmail never cared for people’s empowerment. J&K is now free from their shackles. A new dawn, better tomorrow awaits!

A momentous occasion in our Parliamentary democracy, where landmark bills pertaining to Jammu and Kashmir have been passed with overwhelming support!

6.02 pm: “Together we are, together we shall rise and together we will fulfil the dreams of 130 crore Indians! A momentous occasion in our parliamentary democracy, where landmark bills pertaining to Jammu and Kashmir have been passed with overwhelming support!” PM Modi said in a series of tweets soon after the Lok Sabha passed the bills.

6.01 pm: PM Modi also said a new dawn awaits the people there as they are now free from the “shackles” of vested interest groups.

6.00 pm: Prime Minister Narendra Modi on Tuesday hailed the passage of bills on Jammu and Kashmir in Parliament as a “momentous occasion” in parliamentary democracy.