Jaitley, A Lawyer By Profession, Had Been An Important Part In Prime Minister Narendra Modi's Cabinet In The BJP Government's First Term

Former Union finance minister and BJP stalwart Arun Jaitley passed away at Delhi's AIIMS on Saturday. He was 66. Jaitley was admitted on August 9Â after he complained of breathlessness and restlessness. In aÂ statement issued by AIIMS "It is with profound grief that we inform about the sad demise of Shri Arun Jaitley, Hon'ble Member of Parliament & Former Finance Minister, Government of India at 12:07 pm on 24th August, 2019. Shri Arun Jaitley was admitted in AIIMS, New Delhi on 09/08/2019 and was treated by a multidisciplinary team of senior Doctor," it read.

The All India Institute of Medical Sciences (AIIMS) had not issued any bulletin on Jaitley's health condition sinceÂ August 10. Jaitley, a lawyer by profession, had been an important part in Prime Minister Narendra Modi's Cabinet in the BJP government's first term. He held the finance and defence portfolios, and often acted as the chief troubleshooter of the government.

7.50 pm: Union Home Minister Amit Shah in Delhi: Whenever I faced trouble in my life, Arun Jaitley ji stood by me. Today he is not with us anymore, I pray to the almighty to give peace to the departed soul and give strength to his family and BJP workers, to cope with this loss.

6.30 pm:Â Defence Minister Rajnath Singh on Arun Jaitley: The nation will never forget his contribution, he was an asset to the party, the government when he was part of it, and the country. He is not with us anymore, I pay tribute to him.

6.25 pm:Â The US mission in India grieves with the people of India on the loss of former minister Arun Jaitley. Heâ€™ll be remembered for his long and distinguished service to India: U.S. Embassy.

6.20 pm:Â Deeply saddened to learn of the passing away of Arun Jaitley. He was a legal luminary and an exemplary parliamentarian. We extend our deepest sympathies to his family, friends and colleagues, says Kerala CM Pinarayi Vijayan.

Shocked & saddened to hear about the passing away of Shri Arun Jaitley ji. He was genuinely a good person, always willing to help others. He took out his precious time back in 2006 when my father passed away to come to my home & pay his condolences. May his soul rest in peace.

Arun Jaitley Jiâ€™s demise is a huge loss to the nation. He was a brilliant lawyer and parliamentarian, whom I personally admired and from whom I have derived immense learning.

In him the nation has lost one of its leading lights and I have lost a family member. #ArunJaitley pic.twitter.com/gZIibW6DZ9 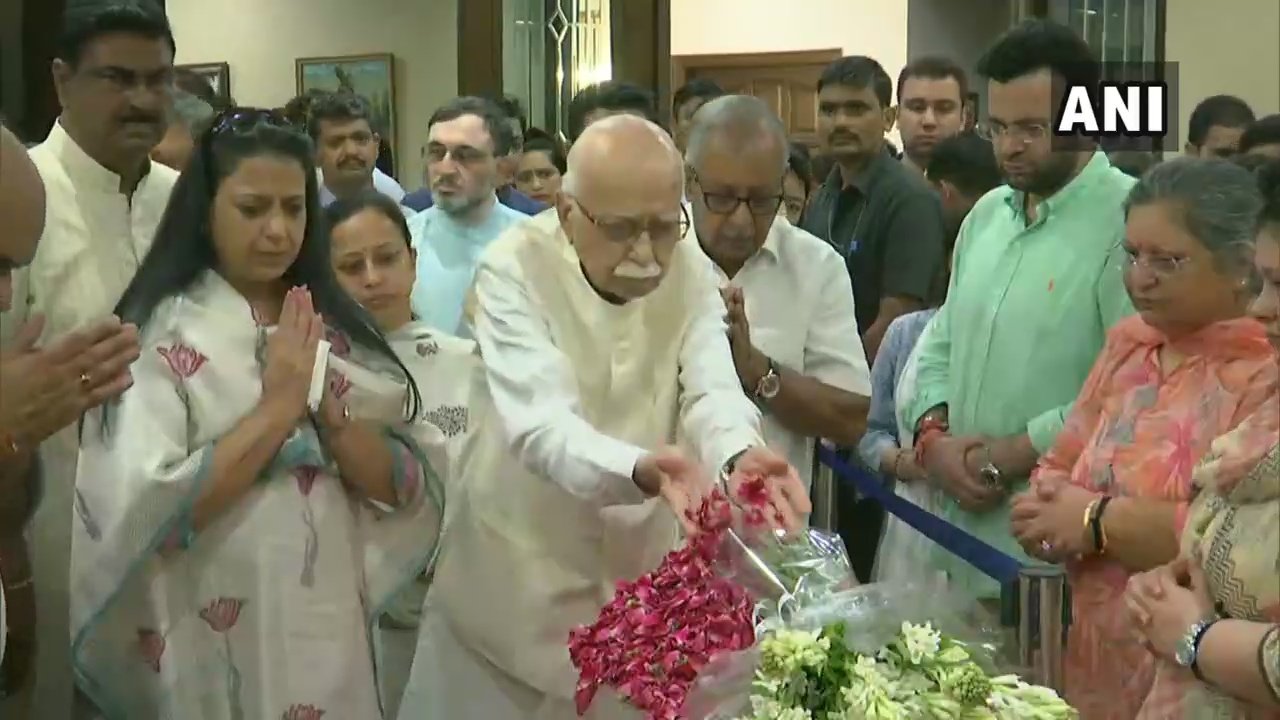 5.20 pm:Â US Embassy: US Mission in India grieves with people of India on demise of former Minister Arun Jaitley. He'll be remembered for his long & distinguished service. Especially notable was his introduction of GST,efforts to improve ease of doing business,&measures to combat corruption.

5.10 pm:Â Union I&B Minister, P Javadekar in Coimbatore: BJP has lost one of its diamonds,Arun Jaitley. An orator par excellence,he was a master of articulation.We've lost many leaders in 1 year,Atal ji, Ananth Kumar,Manohar Parrikar,Sushma Swaraj&now Arun Jaitley. We deeply mourn his death. 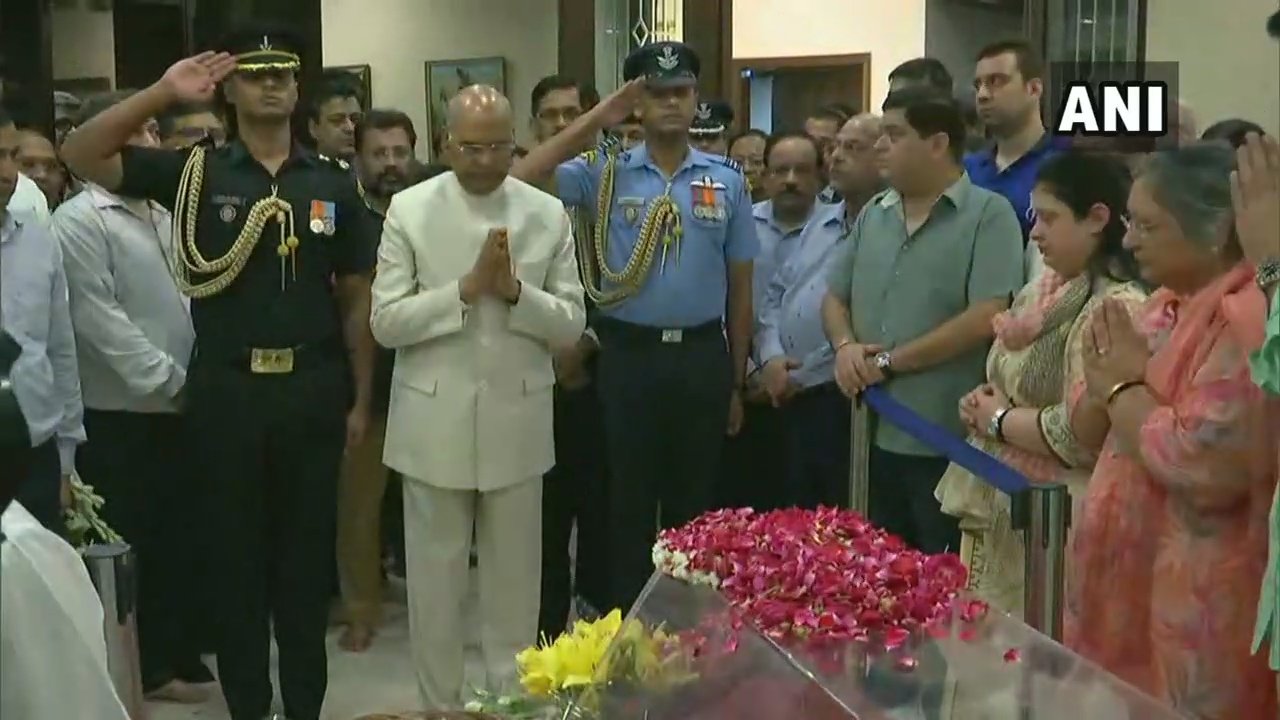 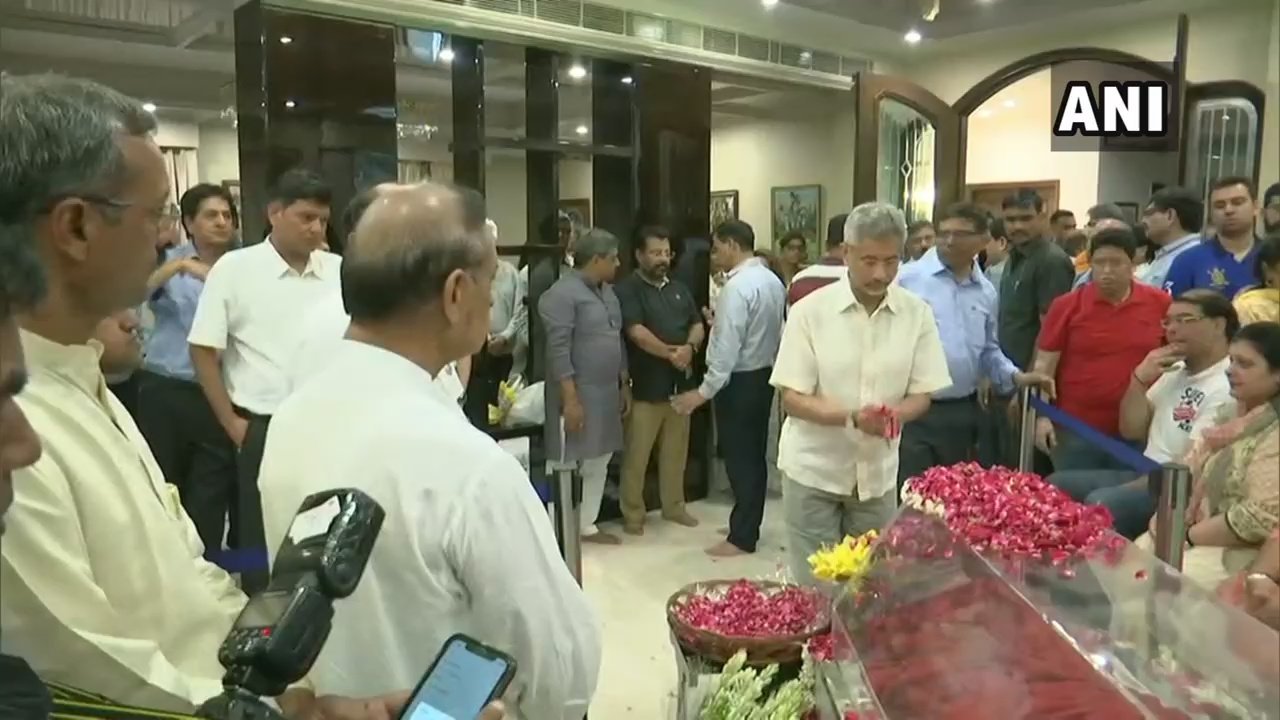 4.40 pm:Â Uttarakhand Government has declared state mourning of a day following demise of Former Finance Minister Arun Jaitley; the national flag will fly at half mast.

4.25 pm:Â J&K Governor SP Malik on Arun Jaitley: It's a big loss for BJP,country & for me personally.He was a very talented person, brilliant people like him are rarely seen in politics. I pray to the almighty to give peace to his soul & give strength to his family at this moment of grief. 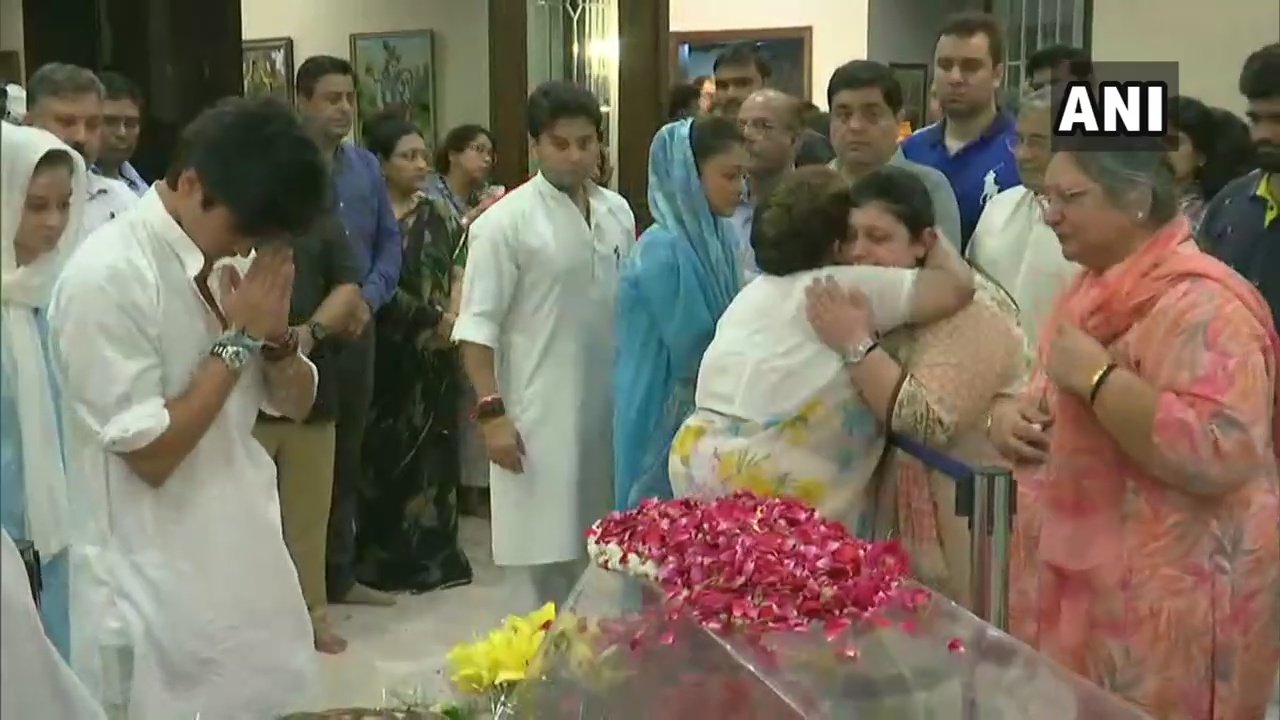 4.12 pm:Â Indian cricket team to wear black arm bands in its match against West Indies today to condole the demise of Former Finance Minister Arun Jaitley, who was also the president of the Delhi District Cricket Association (DDCA) & former vice-president of BCCI.

3.45 pm: Mortal remains of Arun Jaitley brought to his residence from AIIMS Hospital. He will be cremeted tomorrow. 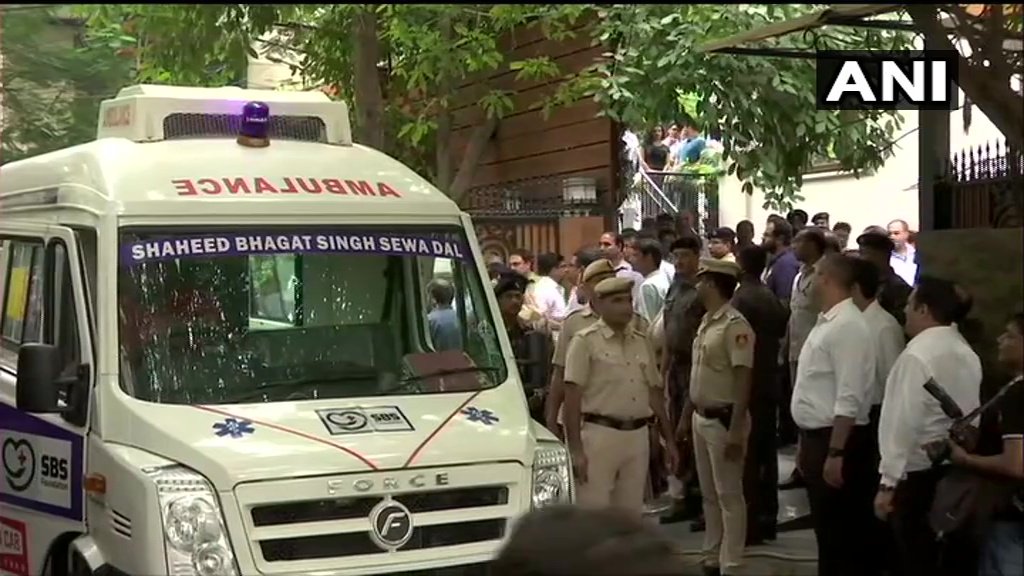 3.35 pm:Â Leaders cutting across political parties in Karnataka condoled the demise of BJP stalwart and former Union Finance Minister Arun Jaitley, who passed away on Saturday after a prolonged illness.

Chief Minister B S Yediyurappa expressed â€œshockâ€ÂÂÂÂÂÂÂÂÂÂ over the death of the BJP veteran. Yediyurappa said, Jaitelyâ€™s untimely passing away has come as a â€œrude shockâ€ÂÂÂÂÂÂÂÂÂÂ to him as he excelled in Indian politics in the recent years as a best financial and development expert.

In his condolence message, Former Prime Minister and JDS Supremo H D Deve Gowda termed Jaitley as one of the â€œtallest leadersâ€ÂÂÂÂÂÂÂÂÂÂ of the country.

â€œIt is shocking to learn about the sad demise of one of the tallest leaders of our country @arunjaitley, the former Union Minister who had held the portfolios of Finance, Defence, Corporate Affairs,Commerce and Industry and Law and Justice. A great loss to our Nation. #ArunJaitley,â€ÂÂÂÂÂÂÂÂÂÂ he tweeted.

3.25 pm:Â I am personally, deeply saddened by passing away of Arun Jaitley, says CJI Ranjan GogoiÂ

2.55 pm:Â Noted lawyer and former union minister Kapil Sibal said he has lost an old friend and a dear colleague

â€œVery sorry to learn that Arun Jaitley is no more. An old friend and a dear colleague will be remembered for his seminal contributions to the polity and as FM of India. As Leader of Opposition he was without match. He always stood steadfastly for his friends and for his party,â€ÂÂÂÂÂÂÂÂÂÂ he said.

â€œDeeply saddened by the tragic passing of my friend&DelhiUniv senior @arunjaitley. We first met when he was at DUSU & I was President of St Stephens College Union. Despite political differences we enjoyed a healthy mutual respect & debated his Budget often in LS. A great loss4Indiaâ€ÂÂÂÂÂÂÂÂÂÂ, the Thiruvananthapuram MP tweeted.

"Deeply saddened at the untimely passing away of Arun Jaitley. Visited him just day before and prayed for his speedy recovery. He was a leader with deep intellect and knowledge, and a voice of reason. He will be dearly missed. My prayers with his family, friends and admirers," former President Pranab Mukherjee said.

Deeply pained to hear about the sad demise of former Union Minister Arun Jaitley Ji. His passing away is a great loss to our country. An eloquent orator, a visionary leader, he had contributed immensely towards building New India. My deepest condolence to his family and loved ones!" Arunachal Pradesh Chief Minister Pema Khandu tweeted.

"Congress President Smt. Gandhi has expressed deep pain and distress at the untimely passing away of Shri Arun Jaitley. Condoling his death she said that Shri Jaitley had a long innings as a public figure, Parliamentarian and Minister and his contributions to public life will forever be remembered," Congress posted the condolence message on Twitter.

His death is an irreparable loss for the country and personally to me also. I have no words to express my grief. He was a powerful intellectual, an able administrator and a man of impeccable integrity.

Born in the year 1952 to Maharaj Kishen Jaitley and Ratan Prabha Jaitley, Arun Jaitley was one of the most senior leaders of the Bharatiya Janata Party (BJP) who held some key profile in the Narendra Modi cabinet.

Arun Jaitley did his schooling at St. Xavierâ€™s School, New Delhi from 1960-69 and did his graduation in Commerce from Shri Ram College of Commerce, New Delhi in 1973. He obtained is Law degree from the University of Delhi, in 1977. Jaitley was the Akhil Bharatiya Vidyarthi Parishad (ABVP) student activist in the Delhi University in the seventies and became President of the University Studentsâ€™ Union in 1974.

"Extremely saddened to learn of the demise of former Finance Minister Arun Jaitley ji. An inspiration and guide, we have lost a towering leader, whose contribution towards shaping the growth story of New India is unparalleled. My deepest condolences in this hour of grief."Â

"Saddened by Jaitley ji's demise, BJP family has lost one of its integral members today. I pray to the almighty to give peace to the departed soul and give strength to his family at this time of grief."

Deeply saddened to hear about passing away of former Union Minister Arun Jaitley ji. He was a distinguished lawyer, parliamentarian and an erudite person. His contribution to governance has been profound. Heartfelt condolences to the bereaved family, friends and followers.

1.40 pm:Â PM Narendra Modi has spoken to Arun Jaitleyâ€™s wife and son, and expressed his condolences. Both of them insisted that PM does not cancel his current foreign tour, reports news agency ANI.

Untimely demise of former FM and senior leader Sh Arun Jaitley ji is a huge loss to the nation. A legal luminary and an experienced political leader known for his governance skills will be missed by the country. Thoughts and prayers with his family in this moment of grief.

A stalwart who paid tribute to his simple beginnings by helping those with meagre means. Orator par excellence, legal luminary Arun JaitleyÂ ji served the Nation and sangathan with dedication and zeal. My tributes to him. Condolences to loved ones. Om Shanti.

Deeply anguished by the demise of my friend and an extremely valued colleague Shri Arun Jaitley ji. He was a proficient lawyer by profession and an efficient politician by passion.Â Arun Jaitley ji served the nation in several capacities and he was an asset to the government and the party organisation. He always had a deep and clear understanding of the issues of the day. His knowledge and articulation won him several friends.

Jaitleyji will always be remembered for pulling the economy out of the gloom and putting it back on the right track. The BJP will miss Arunjiâ€™s presence. I extend my heartfelt condolences to his bereaved family.

Arun Jaitley Ji was a political giant, towering intellectual and legal luminary. He was an articulate leader who made a lasting contribution to India. His passing away is very saddening. Spoke to his wife Sangeeta Ji as well as son Rohan, and expressed condolences. Om Shanti.

Full of life, blessed with wit, a great sense of humour and charisma, Arun Jaitley Ji was admired by people across all sections of society. He was multi-faceted, having impeccable knowledge about Indiaâ€™s Constitution, history, public policy, governance and administration.

BJP and Arun Jaitley Ji had an unbreakable bond. As a fiery student leader, he was at forefront of protecting our democracy during the Emergency. He became a much liked face of our Party, who could articulate the Party programmes and ideology to a wide spectrum of society.

With the demise of Arun Jaitley Ji, I have lost a valued friend, whom I have had the honour of knowing for decades. His insight on issues and nuanced understanding of matters had very few parallels. He lived well, leaving us all with innumerable happy memories. We will miss him!

Extremely saddened by the passing of Shri Arun Jaitley after battling a long illness with fortitude and dignity. A brilliant lawyer, a seasoned parliamentarian, and a distinguished Minister, he contributed immensely to nation building.Â Shri Arun Jaitley possessed a unique ability of discharging the most onerous responsibility with poise, passion and studied understanding. His passing leaves a huge void in our public life and our intellectual ecosystem. Condolences to his family and associate.

1.10 pm:Â Vice President M. Venkaiah Naidu (in file pic) who was to leave from Chennai for Nellore in Andhra Pradesh, has cut short his visit and is returning to Delhi following the demise of former Finance Minister Arun Jaitley.

Deeply pained by the demise of Arun Jaitley ji. It is like a personal loss for me. I have not only lost a senior party leader but also an important family member who will forever be a guiding light for me.Â

12.52 pm:Â Home Minister Amit Shah has cut short his visit to Hyderabad, and is returning to Delhi following passing away of former Finance Minister Arun Jaitley