The government is scheduled to table the CAG report on Rafale jet fighter deal, which has generated a massive political controversy. Robert Vadra, Congress President Rahul Gandhi's brother-in-law, is expected to make a fresh appearance before the Enforcement Directorate on Tuesday in Jaipur in connection with a probe into an alleged land scam in the Rajasthan's border town of Bikaner, officials said Monday.  Vadra's mother Maureen is also likely to appear before the central probe agency at about 10 am. Priyanka Gandhi Vadra’s meetings will start from 9.30 am and continue till 11.30 pm with only half-an-hour reserved for lunch. Prime Minister Narendra Modi is set to visit Haryana on Tuesday. During his day-long visit, the prime minister is set to address the "Swachh Shakti 2019" programme in Kurukshetra and will inaugurate the National Cancer Institute. There is a sense of anxiety in and around Sabarimala as the Lord Ayyappa shrine is all set to reopen on Tuesday for monthly worship, after witnessing frenzied protests during the recently concluded annual pilgrim season over the entry of young women.

Defence Minister Nirmala Sitharaman inspected the guard of honour at the German Ministry of Defence and held a bilateral meeting with German Minister of Defence Ursula von der Leyen, in Berlin today.

Jharkhand govt bans Popular Front of India (PFI) in the state under Section 16 of The Criminal Law Amendment Act, 1908.

Delhi: A doctor's body was found behind his house in Mukherjee Nagar earlier today, the cause of the death is yet to be ascertained. Body has been sent for a postmortem. Police are investigating the case.

Samajwadi Party president Akhilesh Yadav Monday alleged he was being stopped at Chaudhary Charan Singh International Airport in Lucknow by police in a bid to prevent him from visiting Allahabad to attend an oath-taking ceremony at Allahabad University. "The government is so afraid of oath ceremony of a student leader that it is stopping me at the airport to prevent me from visiting Allahabad," Akhilesh said in Hindi on Twitter. He tweeted photographs in which he was seen talking to police officers inside the airport. Yadav had to attend an oath-taking ceremony at Allahabad University. When asked, the airport director AK Sharma said, "He had no such information".

Samajwadi Party chief Akhilesh Yadav on Tuesday took to Twitter to complain about the Uttar Pradesh government. In his tweet, Yadav claimed that the Yogi Adityanath government ‘stopped’ him at Lucknow Airport. The former chief minister was scheduled to attend a student’s oath-taking ceremony later in the day.

Fire breaks out at Arpit Palace Hotel in Delhi's Karol Bagh. One dead and several injured as people tried to jump from the fourth floor. As many as 27 fire-tenders 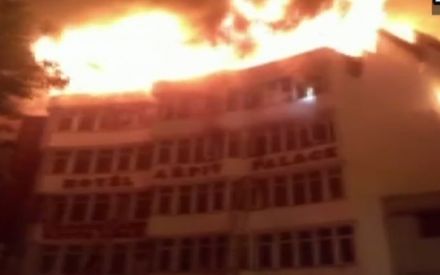 have been rushed to the spot.