Tushar Mehta Says He Is Appearing For The Secretary Of The Governor Since Governor Can't Be A Party In Person.

The brewing political drama in Maharashtra has reached at the doorstep of the Supreme Court with Centre being asked to produce the letter of the Governor inviting Devendra Fadnavis and also the letters of support used by the Bharatiya Janata Party leader staking his claim. The top court has asked the Solicitor General to produce the letters at 10.30 am for passing orders. A bench headed by Justice NV Ramana and comprising Justices Ashok Bhushan and Sanjeev Khanna will decide on taking the requests in the petition of Congress, NCP, and Shiv Sena on immediate floor test after examining the letters.

All eyes are now on which way 13 Independents and 16 MLAs from smaller parties will swing in the quest to achieve the 145-mark in the 288-member House in floor test. The Shiv Sena, which is in talks with the Congress-NCP to form a government sans one-time ally BJP, claims to have the support of seven MLAs apart from its own flock of 56.

This is not Goa or Manipur where BJP can do whatever they want: Sharad Pawar

NCP Chief Sharad Pawar at Hotel Grand Hyatt in Mumbai where Shiv Sena-NCP-Congress MLAs have assembled: We are here together for people of Maharashtra. A govt was formed in state without majority. Karnataka, Goa, & Manipur, BJP didn't have majority anywhere but formed government. pic.twitter.com/Nyu96fXIgB

We will form the government in Maharashtra democratically: Sharad Pawar

Our fight is not just for power, our fight is for 'Satyamev Jayate.' The more you try to break us, the more we will unite.: Uddhav Thackeray

Now we will show who we (Shiv Sena) are: Uddhav Thackeray

This alliance is not only for 5 years but for 25, says Uddhav Thackeray.

We are not after power: Uddhav Thackeray

Independent MLAs are also present in the event

Office of the Chief Minister of Maharashtra: CM Devendra Fadnavis sanctions another Rs 5380 crore from Maharashtra Contingency Fund to give relief to unseasonal rain affected farmers.

We are all one and together , watch our 162 together for the first time at grand Hyatt at 7 pm , come and watch yourself @maha_governor pic.twitter.com/hUSS4KoS7B

Shiv Sena leader Sanjay Raut claimed BJP leaders will go crazy if they remain without power. Talking to reporters, Raut also said mental health clinics will be formed in various parts of Maharashtra for "such people" after the Shiv Sena-NCP-Congress combine comes to power in the state.

"The BJP leaders will go crazy if they are thrown out of power. They will lose their mental balance, as we are going to prove our majority during the floor test," Raut claimed.

"Once we form government, we will build a special hospital to treat the mental illness of BJP leaders," he said.

Anil Patil, NCP MLA who was reportedly missing & brought to Mumbai from Delhi by NCP leaders today: When we reached hotel (in Delhi) at least 100-200 BJP workers were present there along with a lot of police cars & personnel in civil dress, we were scared. We told Sharad Pawar sa'ab that we want to return & stay with the party, he assured us that we will be brought back and made the necessary arrangements.

Asked if Ajit Pawar will be expelled from party: This is not something for which a single individual takes a decision, it has to be decided by the party when the matter comes before it.

Eknath Shinde, Shiv Sena: We've given the letter of support of 162 MLAs to Governor. In democracy, only the majority number holds importance. We want that the minority govt formed on 23rd Nov,should resign as they can't prove majority.Those with the majority should be given opportunity.

Jayant Patil, NCP: Today morning at 10 am, Shinde ji, Thorat ji, Chavan ji, Vinayak Raut ji, Azmi ji, KC Padvi and I - on behalf of NCP, gave a letter to Governor showing strength of 162 MLAs. We are in a position to bring 162 MLAs before Maharashtra Governor at any given time.

Supreme Court order on Shiv Sena-NCP-Congress plea at 10:30 am tomorrow.

“Governor has given 14 days but it isn't 14 months. Should this court now substitute the Governor's views with its own” asks Rohatgi.

"The plea now is to have this court act as the Speaker of the House and decide on everything. Speaker is yet to be chosen, house is to be convened but they want the Supreme Court to preempt everything," Rohtagi tells Supreme Court.

If BJP has majority, why is it worried? I am happy to lose on floor of Maharashtra Assembly: Singhvi to top court, seeking immediate floor test.

Singhvi also presses for a floor test today or tomorrow.

What BJP alliance has shown to Court are signatures of 54 NCP MLAs electing Ajit Pawar as legislative party leader.They weren't signed support for joining BJP alliance to form govt.NCP support to Ajit Pawar was w/o any covering letter. How can Guv turn a blind eye to this: Singhvi tells court.

Appears for NCP, Congress, Singhvi tried to place on record affidavits signed by 154 MLAs to show their support but the Supreme Court refuses to accept it, saying it can't now expand the scope of the petition. Singhvi withdraws the affidavits.

Abhishek Manu Singhvi representing NCP & Congress: When both the groups are open for Floor Test, why should there be a delay? Does a single NCP MLA here say we will join the BJP alliance? Is there a single covering letter saying this. This was the fraud committed on democracy.

Pre-poll alliance fell out since promises made before elections were not honoured. And there were ideological differences too, Shiv Sena's lawyer Kapil Sibal tells Supreme Court. He also adds he has original affidavits of 154 MLAs supporting the Sena alliance.

"We would have staked claim on 23rd if this wouldn't have had happened. What was the national emergency to revoke President's Rule at 5 AM and appoint a CM at 8 in the morning," asks Sibal.

There is nothing to contradict my list, I was authorised to lend support on the day I gave that letter. I will resolve my party disputes but this petition must end now, Ajit Pawar's lawyer Maninder Singh tells top court.

Now, NCP’s counsel are arguing in the court.

The Governor after all has invited the single largest party. BJP has more than double the numbers on its own. It isn't as if any imposter is going to run the government. No interim order should be passed by this court, says Solicitor General.

"Can a party come to this court and say if a floor test doesn't take place within 24 hours, my MLAs could run away again? Can Supreme Court monitor the proceedings of the House? It is constitutionally barred after all," says Tushar Mehta.

The Supreme Court observes the only question today is whether the Chief Minister enjoys the majority in the House or not. Rohatgi replies floor-test is imperative but once this court finds the Governor's decision was not wrong, this court can't set a timeline etc.

"Nobody says the letter of support is fabricated. It is the other Pawar and the parties which are indulging horse trading," says Rohatgi.

Appearing for Fadnavis, Rohtagi says, “It is a family feud. One Pawar was with me, another Pawar with them. But I went to the Governor with 170 MLAs supporting me.”

It was then the Governor wrote to the President, requesting for revocation of the President's Rule, Mehta tells top court.

Mehta said that the Governor took the decision after looking at these records presented before him.

Mehta submits documents to show Ajit Pawar submitted a letter of support to the Governor with signatures of 54 NCP MLAs.

Solicitor General Tushar Mehta to SC: Shiv Sena has 56, NCP 54, INC 44 seats. There was talk about horse trading but Guv possibly felt that entire stable is stolen. I'm seeking time to file reply as there are questions which need to be discussed

Tushar Mehta says he is appearing for the Secretary of the Governor since Governor can't be a party in person.

Mehta says that from October 24 to November 9, Governor Bhagat Singh Koshyari kept on waiting, but no one came forward to stake claim and form government.

There are media reports that Bhujbal has failed to convince Ajit Pawar.

What BJP did is wrong, the party doesn’t have numbers, says NCP chief Sharad Pawar in Karad.

“Devendra Fadnavis must realise that he does not have a majority. He should realise that he has made a mistake. If he doesn't resign, we will certainly defeat the government on the floor of the House,” says NCP leader Nawab Malik.

Even as the everyone waits for the 10:30 am hearing at the Supreme Court, there are reports coming in the that Maharashtra Governor Bhagat Singh Koshyari will land in Mumbai at around 1:30 pm. 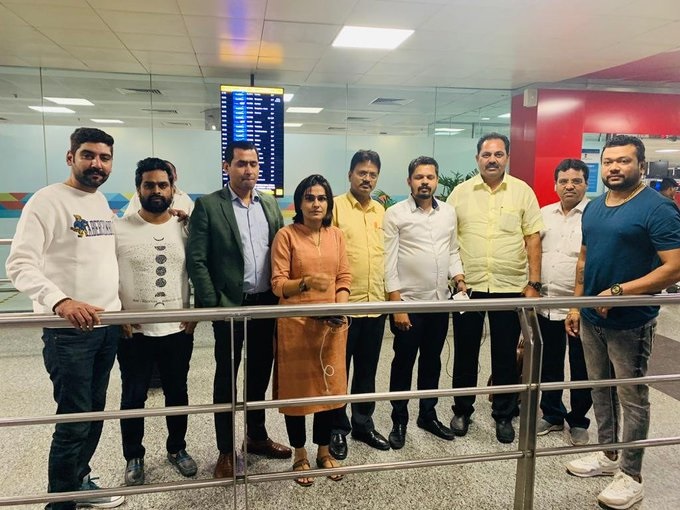 Rajya Sabha MP Binoy Viswam has given Suspension of Business Notice in Rajya Sabha under rule 267 over 'Maharashtra government formation'.

Leader of Congress in Lok Sabha, Adhir Ranjan Chowdhury, and Congress' Chief Whip in Lok Sabha, K Suresh have given adjournment motion notice in the House on Maharashtra issue.

In yet another twist in the ongoing political drama in Maharashtra, two of the 54 NCP lawmakers were ‘brought back’ from Delhi to Mumbai in early morning hours on Monday. Aroudn 50 lawmakers are already camping in Hyatt Mumbai. NCP MLAs Daulat Daroda and Anil Patil were flown in from Delhi to Mumbai. A ‘missing’ complaint was filed against them after the chaotic events of Saturday. Reportedly, both are back in fold and have pledged their support for Sharad Pawar. With this, the NCP claims that 53 out of 54 MLAs are supporting Sharad Pawar. Read here...

Maharashtra: Who Is Supporting Whom?

While major political parties in Maharashtra are slugging it out to form a government amidst twists and turns, all eyes are now on which way 13 Independents and 16 MLAs from smaller parties will swing in the quest to achieve the 145-mark in the 288-member House in floor test. The Shiv Sena, which is in talks with the Congress-NCP to form a government sans one-time ally BJP, claims to have the support of seven MLAs apart from its own flock of 56. Read here...