The veteran BJP leader and former HRD Minister Murli Manohar Joshi on Thursday demanded the removal of JNU Vice Chancellor Jagadesh Kumar and said VC's attitude is deplorable and he should not be allowed to continue on his post. "Reports are, that the ministry had twice advised the JNU, VC, to implement certain reasonable and working formula for resolving the issue of enhancing fees in JNU. He was also advised to reach out to the teachers and students. It is shocking that the VC is adamant for not implementing government proposal. This attitude is deplorable and in my opinion such a VC should not be allowed to continue on this post," Murli Manohar Joshi wrote.

The HRD Ministry on Thursday said the removal of Jawaharlal Nehru University Vice-Chancellor M Jagadesh Kumar was not a solution. HRD Secretary Amit Khare said officials of the ministry will talk to Kumar again on Friday over the students' claims of revised fee not being implemented. "The removal of the vice chancellor is not a solution," he said, adding the ministry officials will also meet JNU Students' Union after meeting Kumar.

Earlier today, the JNU students who tried to march towards the Rashtrapati Bhavan protesting the violence on university campus were stopped by police and later detained. The police also resorted to baton charge to control the mob who tried to block the traffic at Janpath. Using loud speakers, the police also appealed to the crowd to maintain peace.

Before the students tried to proceed towards the Rashtrapati Bhavan, a delegation of JNU Students' Union and JNU Teachers' Association also met Human Resource Development (HRD) Ministry officials and demanded removal of Vice Chancellor M Jagadesh Kumar from his post.

No Compromise Over Removal Of VC: JNUSU President Aishe Ghosh

JNU Students' Union president Aishe Ghosh on Thursday said the students and faculty will not relent till vice-chancellor M Jagadesh Kumar is sacked. She made the comments after meeting HRD officials. Ghosh said they appealed to HRD ministry to remove the VC, which in turn said a dialogue will be held on Friday. "We will not compromise with HRD ministry over the removal of the VC. It is still thinking whether the VC should be removed," he said. 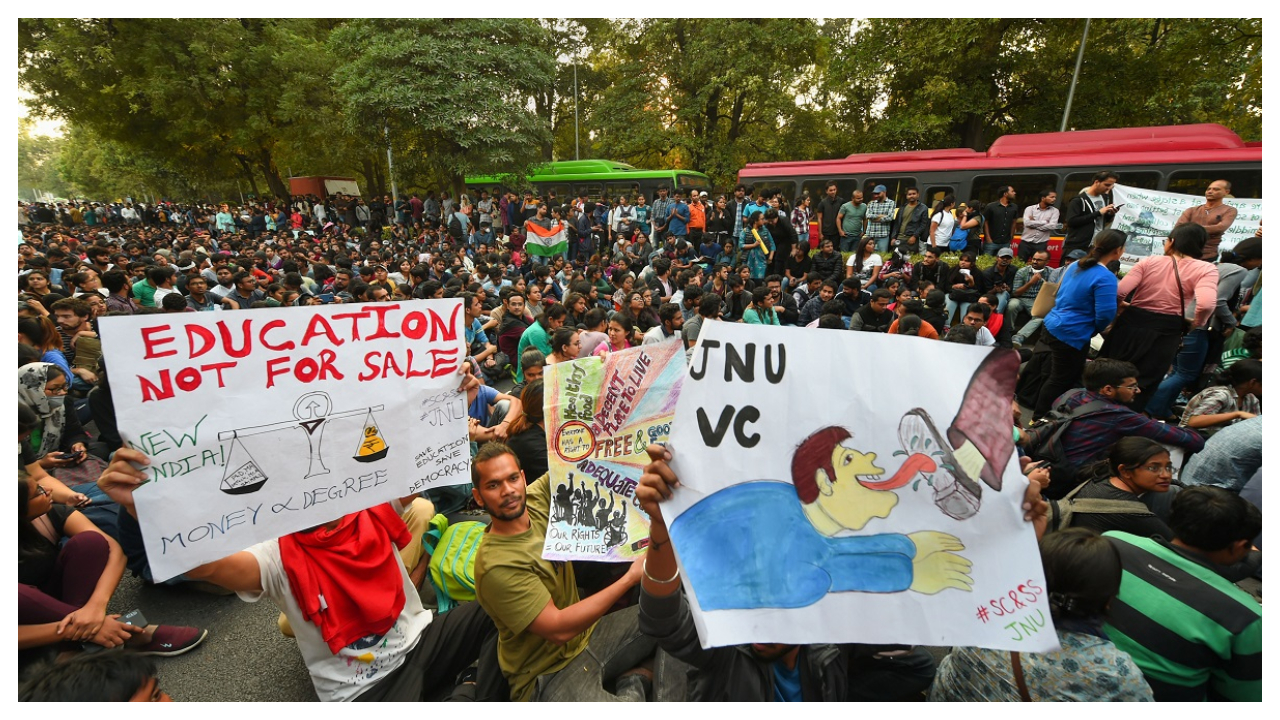 The HRD Ministry said the removal of Jawaharlal Nehru University Vice-Chancellor M Jagadesh Kumar was not a solution.

Taking a dig at the Centre, former JNU students union president Kanhaiya Kumar on Thursday said actress Deepika Padukone was patriotic when she was an ambassador for a Modi government initiative but turned anti-national after visiting JNU. Addressing a crowd outside the premises of the Human Resource Development Ministry, he also said there was no “tukde tukde” government before 2014. ‘Tukde tukde’ gang is a term used by the BJP to refer to alleged sympathisers of separatists. Padukone and shuttler PV Sindhu were on October 22 last year named ambassadors for ‘Bharat Ki Laxmi’, an initiative by the Modi government aimed at bringing to light the commendable work done by women across the nation ahead of the festival of Diwali.