Number game explained: Who stands where in Karnataka Assembly

The Bharatiya Janata Party (BJP) Is The Largest Party With 105 MLAs In The House, Where The Current Half-way Mark Is 113.

The wobbly Congress-JDS government in Karnataka led by HD Kumaraswamy is facing a crisis like situation after en masse resignation of MLAs. 11 legislators (Congress-8 and JDS-3) of the ruling alliance submitted their resignation at the Speaker's office on Saturday.

Assembly Speaker Ramesh Kumar was not in his office when the legislators went there to submit their resignation, sources said.

Earlier, Anand Singh - Congress MLA from Vijayanagar had resigned from the Assembly.

"...11 of them have submitted resignation letters. I told officials to take the letters and issue acknowledgment. Tomorrow the office will be closed...Monday I have a prior engagement, so on Tuesday I will go to the office and take further action, in accordance with rules," he said.

The coalition's strength in the 224-member Assembly stands at 118 - 80 of Congress (including the Speaker and 1 member of Karnataka Pragnyavantha Janatha Party (KPJP) who has merged his party with the grand old party and has been given a ministerial berth), 37 of JDS, 1 of BSP and 1 Independent), besides the Speaker. 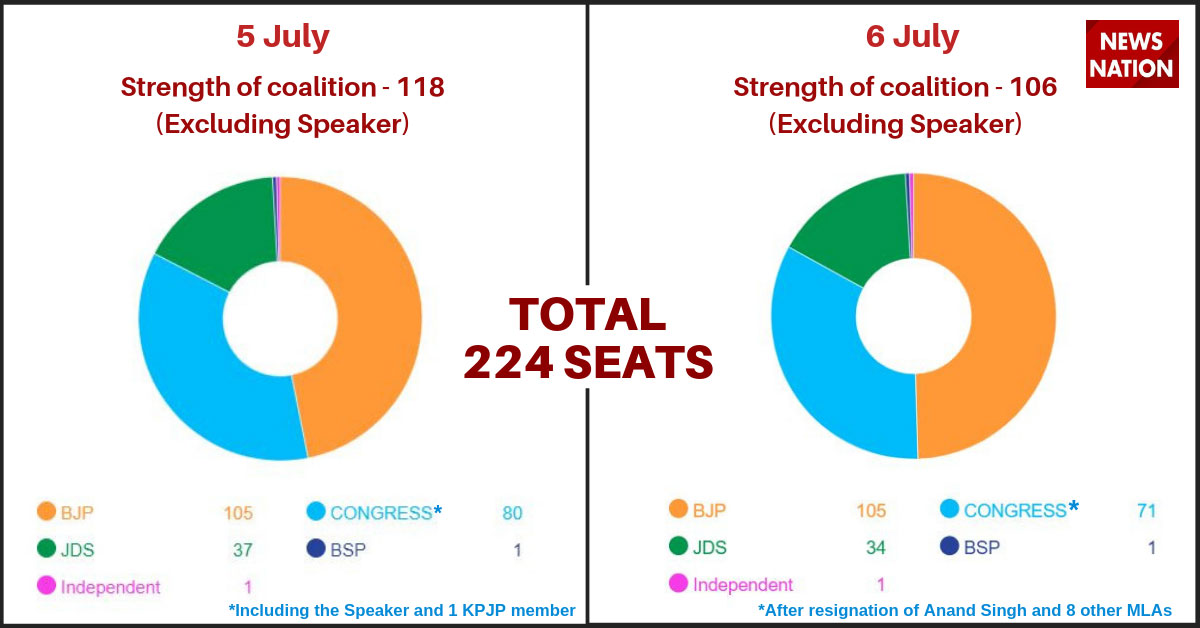 This includes MLAs who have resigned, as their resignations are yet to be accepted by the Speaker.

The Bharatiya Janata Party (BJP) is the largest party with 105 MLAs in the House, where the half-way mark is 113.

If the Speaker accepts the resignation of all the MLAs, the current strength of the coalition government will come down to 106 and the effective strength of the state Assembly will fall to 212 (including 11 who have tendered resignation and Anand Singh). The halfway mark in such a scenario will be 107.

This will put the BJP in an advantageous situation which has a strength of 105 and it will leave no stone unturned to form a government in the state.

Union Minister and BJP leader DV Sadananda Gowda has already announced that senior party leader BS Yeddyurappa will be the chief minister of Karnataka if a new government is formed in the state after 11 legislators of the ruling alliance submitted their resignation at the Speaker's office on Saturday.