Replying To A Debate On The Bill In Rajya Sabha, Amit Shah Said The Need To Bring This Bill Would Not Have Arisen Had Partition Not Taken Place On The Basis Of Religion.

Congress president Sonia Gandhi on Wednesday said the passage of the Citizenship Amendment Bill marks a “dark day” in constitutional history of India and a “victory of narrow minded and bigoted forces” over the country’s pluralism. In a statement, she also reiterated Congress’ determination to be relentless in its struggle against what she alleged was the BJP’s “dangerously divisive and polarising agenda”. 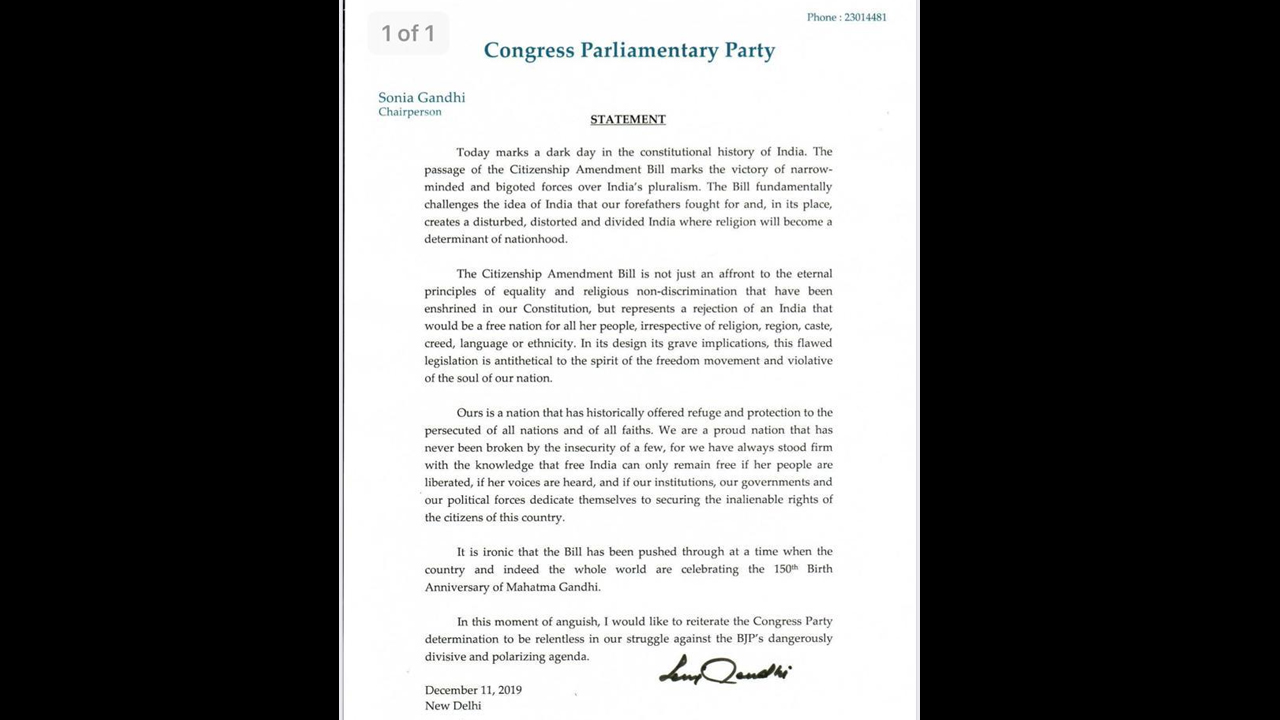 “The Bill fundamentally challenges the idea of India that our forefathers fought for and, in its place, creates a disturbed, distorted and divided India where religion will become a determinant of nationhood,” she said.

Earlier today, Home Minister Amit Shah rejected the Opposition’s charge that the Citizenship (Amendment) Bill was anti-Muslim, saying it does not take away the citizenship of any Indian Muslim and only seeks to given the same to persecuted minorities of three neighbouring countries.

Replying to a debate on the bill in Rajya Sabha, he said the need to bring this Bill would not have arisen had Partition not taken place on the basis of religion.

The Bill does not snatch citizenship of Muslims and there is no need for them to have any fear, he said.

“We have included six religions. There is no appreciation. The only focus is on Muslims.... Are Muslims in Pakistan, Bangladesh and Afghanistan minorities.... Isn’t it secularism?

Countering the Opposition’s charge that the bill is unconstitutional, he said that Article 14 of the Constitution does not prohibit Parliament from making laws in this regard if there is reasonable classification.

“There is a specific class. We are taking all minorities,” Shah said.