Post His Address, Modi, Accompanied With Jaganmohan Reddy, Proceeded To Tirumala Hills To Worship And Offer Prayers To Lord Venkateshwara.

After concluding his two-nation visit to Sri Lanka and Maldives, Prime Minister Narendra Modi on Sunday arrived in the temple town of Tirupati to offer prayers to Lord Venkateswara, atop the sacred Tirumala Hills. On his arrival at the Tirupati airport in Renigunta, PM Modi was received by Andhra Pradesh Governor ESL Narasimhan, newly-elected Chief Minister YS Jaganmohan Reddy, Union Minister of State for Home G Kishan Reddy and several other prominent leaders from the state. Reddy received a pat on his back from PM Modi after he tried to touch the latter's feet twice.

On his way back from Colombo, the prime minister went to the Electronics Park in Renigunta and took part in a thanksgiving meeting organised by the Bharatiya Janata Party (BJP). Addressing the massive crowd, the prime minister, first of all, apologised for his delay to reach the meeting, as his programme went a little longer in Sri Lanka.

At this occasion, Modi wished for the betterment of the nation and its people with the blessings of Lord Venkateswara and strengthen the Central government to fulfil its promises made to the people.

The prime minister further urged the people to work collectively towards achieving greater heights of progress in the future. He also appealed to the people to remember the sacrifices of all those that laid down their lives to the cause of nation building.

Assuring the Centre's full cooperation to the state government, Modi said, "I want to give my best wishes to Jaganmohan Reddyji, he too will take Andhra Pradesh forward, I want to assure that Indian government will always be there for the people of Andhra".

Modi asserted that the Central government will leave no stone unturned to ensure rapid development in Andhra Pradesh with their guiding principles of 'Jan Sampark', 'Jan Seva', 'Jan Samarthan' and 'Jan Hit'. 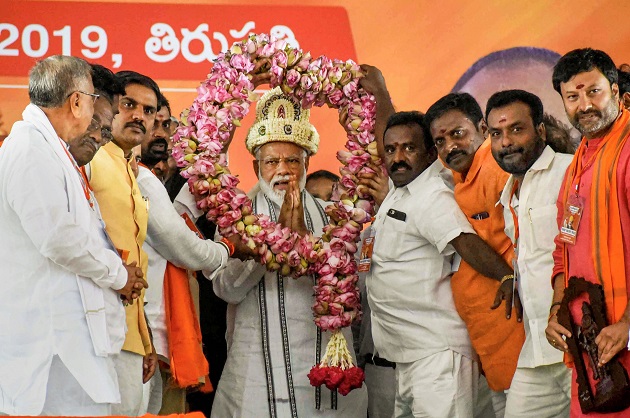 Taking a dig at the opposition parties, Modi stated that the BJP's concern is not only winning elections, they do not come to the field only after the poll bugle is resonated, they are solely conencted with the welfare and development of the people in India.

Post his address in Renigunta, Modi, accompanied with CM Jaganmohan Reddy, proceeded to Tirumala Hills to worship and offer prayers to Lord Venkateshwara.

The prime minister is scheduled to depart for New Delhi later in the evening.