Wedding Card Also Features A Text Defending The Modi Government’s Version Of The Deal And Gives Reasons For Reliance Defence Being Chosen For The Offset Contract.

Prime Minister Narendra Modi’s supporters going an extra mile to make sure the Bharatiya Janata Party (BJP) wins the upcoming Lok Sabha elections is quite a common thing now, but a Gujarat couple has gone to the next level by asking wedding guests to vote for the BJP in the upcoming polls and a monetary contribution for the saffron cause through the party app. At a first glance, the card looks like any regular invite with a symbol of Lord Ganesha, the names of the bride and the groom and their families and the important dates of the ceremonies preceding the wedding, but as one looks to the bottom the card, one sees the gift they have sought.

Yuvraj and Sakshi — both from Surat — say the only gift they expect from their guests is that they vote for the BJP in the upcoming elections and a monetary contribution for the saffron cause on the party app. On turning the page, one even finds a detailed analysis of the Rafale deal, with a trendy headline, “Keep calm and trust NAMO”. The text defends the Modi government’s version of the deal and gives reasons for Reliance Defence being chosen for the offset contract, the cancellation of an earlier deal fixed by the United Progressive Alliance (UPA), and why a joint parliamentary committee cannot be allowed to conduct an investigation into the matter. 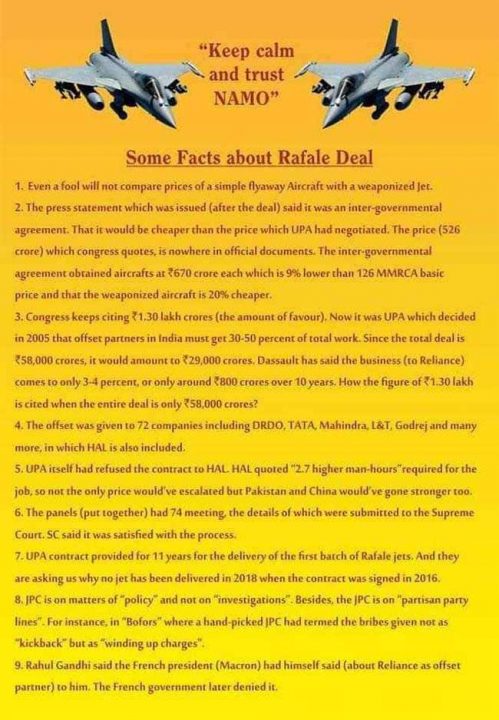 This is not the first time that a wedding card of this sort has gone viral on social networking sites. Earlier in the year, another Surat-based couple --- Dhaval and Jaya --- sought a similar gift in their wedding invite. Another die-hard fan of Prime Minister Narendra Modi from Mangalore also made a similar appeal to his guests. Some of the wedding cards also feature the list of achievements by the Narendra Modi government over the last five years.

@narendramodi Sir. With my wedding invitation card, I am trying to explains the lot of achievement, schemes by Modi Govt. & Urging all invitees get the use. Hand to hand helping them to get the max.benefit . I believe "We have to take care of Modi, Modi will take care of nation. pic.twitter.com/tZcgdX7uUw

Earlier, Prime Minister Modi took to Twitter to share one such incident where one of his supporters put the Swachh Bharat logo on wedding cards.

These incidents came on the heels of the BJP's massive defeat in recently concluded Assembly elections in Chhattisgarh, Madhya Pradesh, Rajasthan, Telangana and Mizoram. However, PM Modi's popularity has increased by leaps and bounds over the last few years and supporters are leaving no stone unturned to make him return to power in 2019.