The Delhi Police Is In Close Touch With The SPG And The Bharatiya Janata Party For The Security Arrangements During The Programme.

Congress, others worried if Muslims across the world support me so much, how long can they frighten Indian Muslims: PM Modi

The entire Left front, that is left in just small pockets in the country, is opposing this as well. Prakash Karat, their senior leader, had also asked for support for religiously persecuted people coming from Bangladesh: PM Modi

I am very confident that those who are standing with the tricolour in their hands will also raise voice against Pakistan sponsored terrorism. They will inspire people to do that: PM Modi

Congress and its allies upset due to the support I received from Muslim countries: PM Modi

Who understands the pain of refugees better than people of Delhi? CAA is not taking away anyone's citizenship. It, in fact, provides citizenship to the religiously persecuted minorities from Pakistan, Afghanistan and Bangladesh: PM Modi

We are doing what they (Congress) had promised but could not do due to vote-bank politics: PM Modi

Infiltrators never come in light. They never ask for help from the police, never give interviews and just hide. They live via corrupt means through agents. Refugees never hide their identities and infiltrators never reveal themselves: PM Modi

Girls are religiously converted and forced to marry in Pakistan. It is well-documented. It only happens because they follow a different religion. These people have come to India only due to such religious persecution: PM Modi

We had a chance to expose Pakistan's discrimination against minorities but it was lost due to our rivals' politics: PM Modi

I request the youth of the country to read the Act in detail and not to fall prey to the rumors of detention-centers being spread by Urban Naxals and Congress. It's a lie and is dividing the nation: PM Modi

I request the youth of the country to read the Act in detail and not to fall prey to the rumors of detention-centers being spread by Urban Naxals and Congress.

It's a lie and is dividing the nation: PM Modi #DilliChaleModiKeSaath

Citizenship law and NRC have nothing to do with Indian Muslims: PM Modi

Rumours over detention centers spread by Congress and Urban Naxals are all false, says PM Modi.

Now that the people of the country have dismissed them, they have gone back to their old measures of divide and rule. The Citizenship Amendment Act is not applicable to any citizen of India irrespective of his religion: PM Modi

Politicians belonging to 100-year old political parties are not voicing for peace. They are mum on the violence being meted out on policemen and other people. It clearly shows you agree with this: PM Modi

Amended citizenship law has nothing to do with Indian citizens: PM Modi

In swipe at AAP, Modi says no appeal for peace from seven-year-old party, it shows violence has its indirect approval.

33,000 police personnel laid down their lives during work since independence but now being attacked mercilessly: PM Modi

My rivals should burn my effigy if they hate me but they should not target the poor: PM Modi

Schools were attacked, buses were torched, public properties were vandalised due to politics, says PM Modi on protests over Citizenship Act

Muslims being misled, I have always ensured that documents will never come in way of development schemes and their beneficiaries: PM

I dare rivals to find anything discriminatory in my work, says PM Modi, citing his govt's various development programmes.

Lie being spread that I brought law to snatch people's rights, it will not stand: PM Modi

Hindus, Muslims, Sikhs, Christians all were befitted, everyone who lives here was benefitted. Why did we do this? Because we live for the love of the country. We are dedicated to the mantra of 'Sabka saath, sabka vikas': PM Modi

Some political parties are spreading rumours, they're misleading people & inciting them. I want to ask them, when we authroised the unauthrosied colonies, did we ask anyone their religion? Did we ask which political party they support? Did we ask for documents from 1970,1980? PM Modi

Misinformation, fake news being spread by some people to provoke others, says PM Modi on CAA protest.

Had the Delhi govt not politicised the phase 4 project of Delhi metro, its work would have started much earlier. That is why I say that those who do politics in your name, never understood your pain, they never intended to do that: PM Modi.

PM Modi targets AAP govt, says it gave over 2,000 bungalows in posh Delhi locations to 'VIPs' close to it in an illegal manner.

PM Modi attacks rivals for not doing enough for unauthorised colonies, says he decided he cannot let this go on.

We promised, we delivered: PM Modi while kicking off BJP's Delhi poll campaign from Ramlila ground.

Even after several decades after Independence, a large section of population in Delhi had to face fear, uncertainty, deceit & false electoral promises. Illegal, sealing, bulldozer & a cut-off date - life of a large population in Delhi' was confined around these words: PM Modi 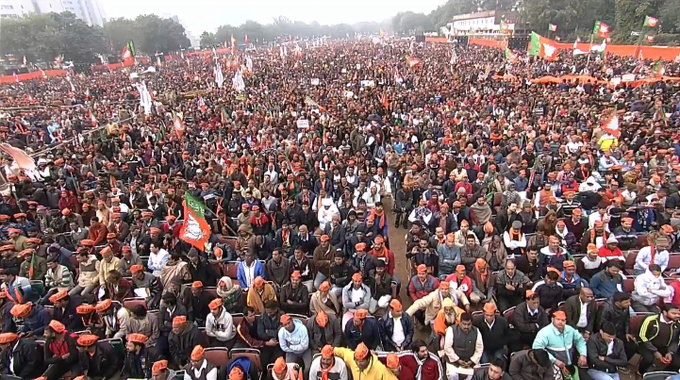 Happy that there is a new dawn for 40 lakh people who now have rights to their homes: PM Modi

Not only me, but over 1.25 lakh people present here want to welcome PM Modi: Manoj Tiwari

Several BJP leaders have reached at the venue.

A police official said 20 companies of outside force have been deployed, each company comprising 70-80 personnel.

Traffic will be affected on Barakhamba Road, Tolstoy Road and Ranjit Singh flyover during PM's rally, says the advisory.

Delhi Waqf Board announces it will give financial assistance of Rs 5.5 lakh each to families of those killed during violent protests against Citizenship Amendment Act.

No commercial vehicle will be allowed from Raj Ghat to Delhi Gate ahead of PM Modi's rally at Ramlila Maidan. Restrictions on DDU Marg towards Kamla Market Chowk via Vivekanand Marg.