Justice Gogoi, The First Person From Northeast To Reach The Top Of Judiciary And Credited For Bringing The Curtains Down On The Decades Old Politically And Religiously Sensitive Ayodhya Land Dispute, Retired As The Chief Justice Of India On Novermber 19, 2019.

President Ram Nath Kovind on Monday nominated former Chief Justice of India (CJI) Ranjan Gogoi to Rajya Sabha. A notification to this effect was issued by the Central Government on Monday. "In exercise of the powers conferred by sub-clause (a) of clause (1) article 80 of the Constitution of India, read with clause (3) of that article, the President is pleased to nominate Shri Ranjan Gogoi to the Council of States to fill the vacancy caused due to the retirement of one of the nominated member," the Central Government notification states. 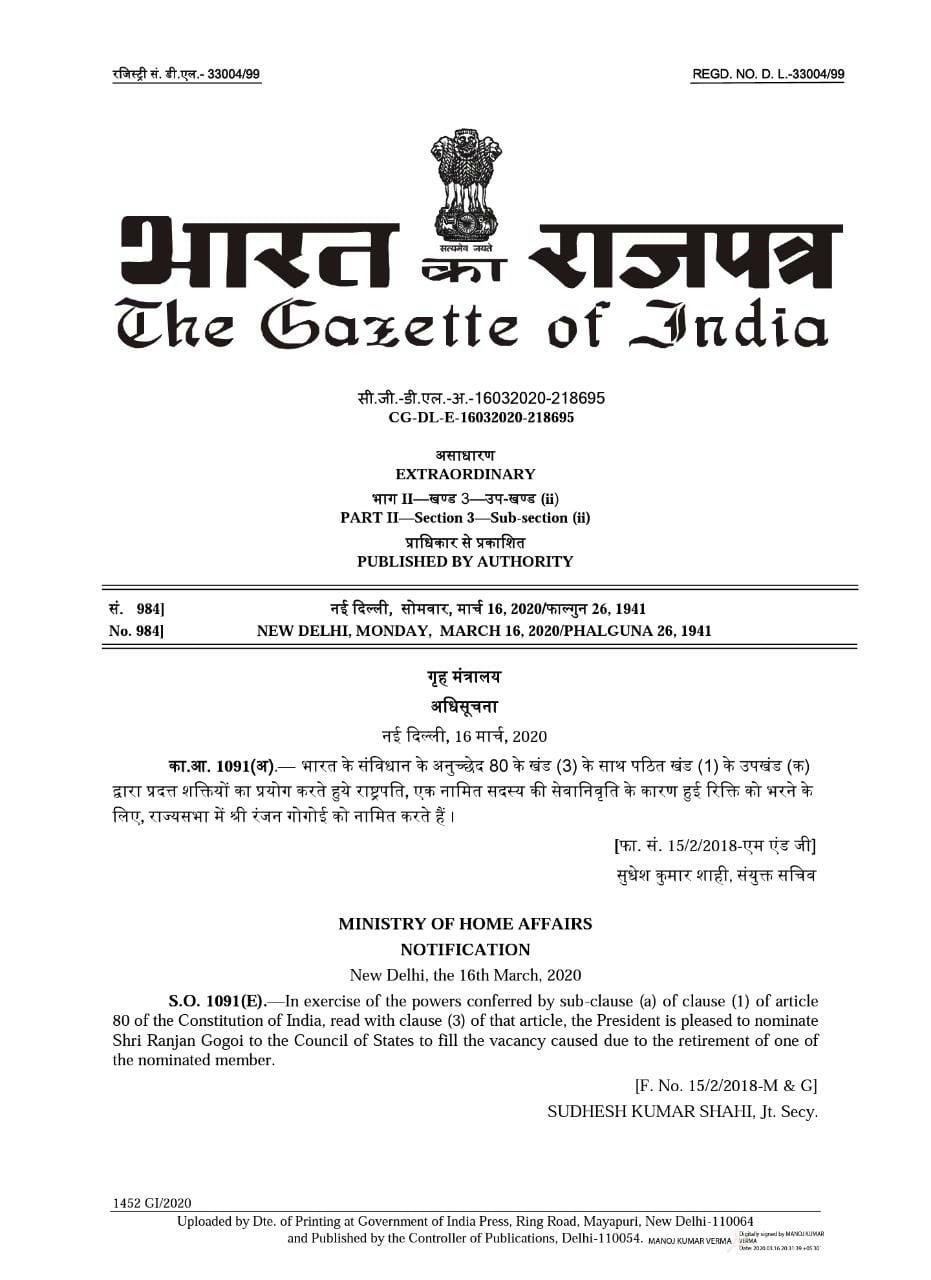 Justice Gogoi, the first person from northeast to reach the top of judiciary and credited for bringing the curtains down on the decades old politically and religiously sensitive Ayodhya land dispute, retired as the chief justice of India on Novermber 19, 2019. Justice Gogoi's tenure as judge and as CJI was marked by some controversies and personal allegations but that never came in his way of his judicial work that was reflected in the last few days when benches headed by him delivered some path-breaking judgements.

He etched his name in the annals of history when a five-judge bench headed by him on November 9 brought an end to the Ayodhya land dispute, which dates back to even before the Supreme Court came into existence in 1950.

However, his tenure in the apex court will also be remembered for being part of a presser by the 'gang of four' senior most judges in January last year which questioned the then CJI's way of functioning. Later at a public function, Justice Gogoi had remarked that "independent judges and noisy journalists are democracy's first line of defence".

A "revolution, not reform" was needed to keep the institution of judiciary serviceable for the common man, Justice Gogoi had said at the same function.
Justice Gogoi's tenure as CJI was not free of controversy as he faced allegations of sexual harassment, of which he was cleared.

However, he is more likely to be remembered for the Ayodhya verdict that gave Hindus the 2.77 acre disputed land for construction of Ram Temple, and order that Muslims be given a 5-acre land at a "prominent location" to build a mosque in the city.

The CJI also headed a bench which, by a majority 3:2 verdict, referred to a larger 7-judge bench the pleas seeking review of the apex court's historic 2018 judgement allowing women and girls of all ages to enter Kerala's Sabarimala temple.

The majority verdict included in the ambit of the review petitions raising issues of alleged religious discrimination against Muslim and Parsi women as well.

Justice Gogoi's name will also be remembered for heading a bench which gave clean chit to the Modi government twice -- first on the writ petition and then on Thursday on the pleas seeking review of the December 14, 2018 verdict -- in the Rafale fighter jet deal with French firm Dassault Aviation.

The bench warned Congress leader Rahul Gandhi for wrongly attributing certain remarks to the apex court in the Rafale case and asked him to be more careful in the future.

Besides, Justice Gogoi headed a bench which in a landmark verdict held that the office of the CJI is a public authority under the Right to Information Act, but "judicial independence has to be kept in mind" while disclosing information in "public interest".

On the same day, a 5-judge Constitution bench headed by him struck down in entirety the rules formulated by the Centre on appointment and service conditions for members of various tribunals, and referred to a larger bench the issue of examining the validity of the passage of the Finance Act 2017 as Money Bill.

These important decisions apart, Justice Gogoi, known for his no-nonsense approach, boldness and fearlessness, also led a bench which monitored and ensured that NRC exercise in Assam, his native state, is completed within the set timeframe.

A lot of controversies plagued the National Register of Citizens (NRC) but he stood his ground and came out in public recently to defend the decision to hold the exercise to identify illegal immigrants.