Aero India 2019 Is Observing Women's Day On Saturday To Celebrate Women's Contribution To The Aviation Sector.

Adding another feather to her cap, ace Badminton player PV Sindhu on Saturday became the first woman to co-pilot the HAL's indigenous Light Combat Aircraft - Tejas at Aero India 2019 in Bengaluru. While taking a sortie on the aircraft, the Olympic silver medallist waved to fans gathered outside the military aviation exhibition at the Yelahanka Air Force base. Apart from Sindhu, astronaut Sunita Williams will also get to fly in the homemade Tejas on Aero India Women's Day. Aero India 2019 is observing Women's Day on Saturday to celebrate women's contribution to the aviation sector.

"Badminton player PV Sindhu waves as she is about to take off for a sortie in the indigenous Light Combat Aircraft - Tejas in Bengaluru. #AeroIndia2019," the news agency ANI reported.

Shuttler PV Sindhu waves as she is about to take off for a sortie in the indigenous Light Combat Aircraft - Tejas in Bengaluru. #AeroIndia2019 pic.twitter.com/w6G6nx6N2n

Tejas, built by the state-run Hindustan Aeronautics Limited, on Wednesday received its final operational clearance (FOC) from military aviation regulator Centre for Military Airworthiness and Certification (Cemilac) for induction into the Indian Air Force (IAF) as a weaponised fighter jet in its operational fleet. It is a single-engine multirole light fighter. On Thursday, the homegrown aircraft was flown by the Chief of Army Staff General Bipin Rawat, who hailed it as a wonderful aircraft.

Besides Tejas, other aircraft which were on display at Aero India 2019, include the Sukhoi SU-30, Rafale Fighter Jet, F-16 Fighting Falcon, F/A-18, Super Hornet, the mighty B-52 Stratofortress bomber among others. The Rafel aircraft which has been at the centre of a political storm for the past few months, on Wednesday stole the show at Asia's premier air show in Bengaluru. 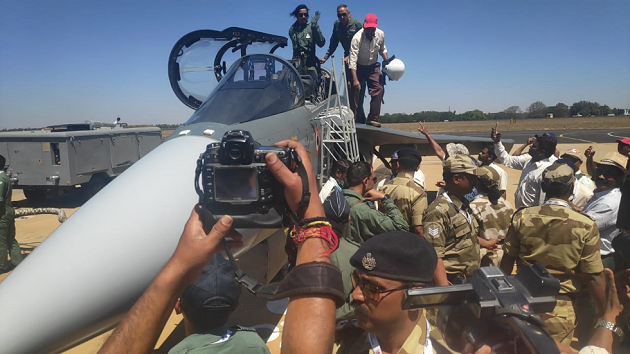 As part of the air display at the expo all-female crews on Saturday will fly a few aircraft and will be felicitated for their significant achievements in the aerospace sector. Three women IAF fighter pilots are expected to fly the Hawk-I advanced jet trainer of BAE Systems plc and an upgraded version of the Russian-made MiG-21. A book and film on 'Women in Aviation' will be also released on the occasion.