Defence Minister Rajnath Singh on Saturday said Pakistan Prime Minister Imran Khan is going door-to-door around the world and creating content for cartoonists, in an apparent reference to his speech at the United Nations General Assembly on Friday. Singh was speaking at the induction of INS Khanderi, Indian Navy's indigenously built second Kalvari class diesel- electric submarine, in Mumbai this morning.

"Pakistan needs to understand that the Indian Navy has become much stronger with the commissioning of the Khanderi, and the government is committed to strengthen the armed forces," Singh said, adding that the Navy will take strict action against those who disturb peace in the region.

Taking pride on INS Khanderi's commissioning into the service, the Union minister said, "It is a matter of immense pride that India is one of the few countries which can build its own submarines". "I am very pleased to be present here on the occasion of the commissioning ceremony of INS Khanderi. The name Khanderi is inspired by the dreaded ‘Sword Tooth Fish,’ a deadly fish known to hunt whilst swimming close to the bottom of the ocean," he stated.

Post his address, Singh, accompanied with Navy Chief Admiral Karambir Singh, took a test-ride of Submarine INS Khanderi from the dockyard of the Mazgaon Dock Shipbuilders Limited in Mumbai. INS Khanderi, the second Scorpene-class submarine that can attack with torpedoes as well as tube-launched anti-ship missiles whilst underwater or on surface, was launched at the Mazgaon Dock Shipbuilders Ltd (MDL) in Mumbai in January 2017. 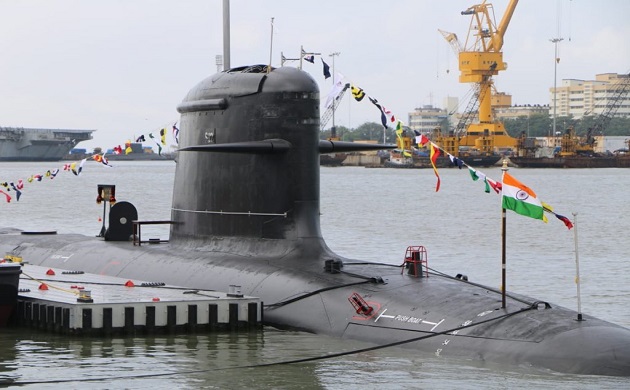 The first Scorpene-class submarine INS Kalvari was commissioned into the Navy by Prime Minister Narendra Modi in December 2017. On the occasion, Modi had said Kalvari was an excellent example of 'Make in India' and will boost the Navy's might.

The state-of-the-art features of the Scorpene-class submarine include superior stealth and ability to launch a crippling attack on the enemy using precision-guided weapon. The stealth features will give it an invulnerability, unmatched by many submarines.

The submarine is designed to operate in all theatres, including the tropics. All means of communications are provided to ensure interoperability with other components of a naval task force.

It can also undertake multifarious missions typically undertaken by any modern submarine, that is anti-surface warfare, anti-submarine warfare, intelligence gathering, mine laying and area surveillance. Apart from INS Khanderi and INS Kalvari, other four submarines in the Scorpene-class are - Karanj, Vela, Vagir and Vagsheer.