Rajya Sabha elections to fill 6 seats in Tamil Nadu to be held on July 18: Election Commission

The Election Commission Has Decided To Hold A Biennial Election To The Council Of States From Tamil Nadu In Accordance With Issue Of Notifications, Filing Of Nominations, Scrutiny Of Nominations And The Withdrawal Of Candidatures.

The Election Commission on Tuesday announced that Biennial Election to the Council of States from Tamil Nadu to fill six vacancies in Rajya Sabha will be held on July 18. The Rajya Sabha seats will fall vacant following the end of tenure of six members of the Council of States elected from Tamil Nadu. Members whose term of office is going to expire on July 24 include Kanimozhi, T, Rathinavel, Dr V Maitreyan, KR Arjunan, Dr R Lakshmanan and D Raja.

Issuing a statement, the poll panel said the Commission has decided to hold a biennial election to the Council of States from Tamil Nadu in accordance with issue of notifications, filing of nominations, scrutiny of nominations and the withdrawal of candidatures. Under the schedule announced by the Commission, the notification for the election will be issued on July 1. The last date for filling the nominations is July 8, 2019. While the poll body is scheduled scrutinise the nomination papers on July 9, the candidates will be allowed to withdraw their candidatures till July 11.

The polling will be held between 9 am and 4 pm on July 18. The counting of votes will be taken up on July 18, the Election Commission stated, adding that the election shall be completed before 22 July, 2019. 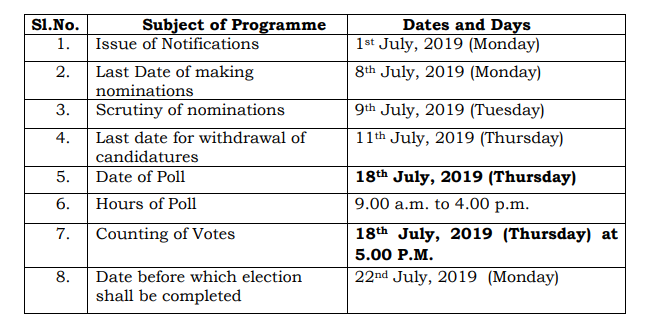 During the Biennial elections, only integrated violet colour sketch pen(s) of pre-fixed specification, provided by the Returning Officer, will be allowed to mark preferences on the ballot paper. The EC has also directed not to use other pen under any circumstances. Meanwhile, adequate measures for close monitoring of the process are in place to ensure free and fair elections.

Going by the strength of parties, the ruling AIADMK and main Opposition DMK can get elected three of their candidates in the elections. The Congress, on the other hand, has reportedly reached out to its ally DMK requesting it to back former prime minister Manmohan Singh's candidature from one of the sex candidates. Singh's 18-year-old term in the Rajya Sabha came to an end this month with Congress not in a position to get him re-elected from Assam. However, there is no official confirmation regarding DMK's decision regarding the same.