The Police Have Claimed That The Pamphlet Was Printed And Distributed In Mosques On December 14, And The Violence In And Outside Jamia Campus Took Place On December 15.

JNU researcher Sharjeel Imam, who has been arrested by the Delhi Police over sedition charges, allegedly called for a large-scale "disruptive chakka-jaam" in Delhi to grab international's media attention. In a pamphlet, a copy of which is with News Nation, the former organiser of the Shaheen Bagh protest, allegedly wrote: "Thousands of Muslim youths are ready to disrupt Delhi which will give international media attention to our issue."

"This law [CAA] is unconstitutional and intends to disfranchise Muslims and put them in detention camps. It has already started in Assam and will follow elsewhere... Kashmir, Babri and now CAA, there are more than enough grounds for a strong reaction from Muslims across India."

The pamphlet also asked people to gather at Jamia Milia Islamia at 3pm. 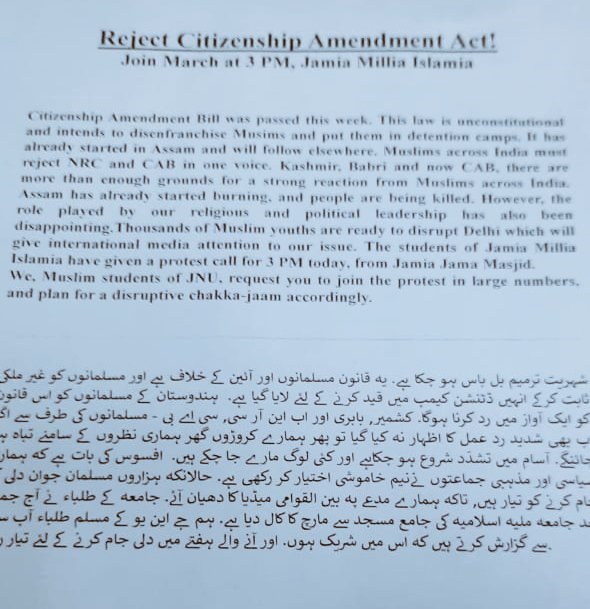 The police have claimed that the pamphlet was printed and distributed in mosques on December 14, and the violence in and outside Jamia campus took place on December 15.

On Monday, a Delhi court extended the police custody of Imam by three days, his lawyer said.

Imam was produced at the residence of Chief Metropolitan Magistrate Purushottam Pathak in the evening amidst high security, said advocate Mishika Singh, appearing for the Jawaharlal Nehru University (JNU) research scholar in the matter.

Imam was arrested from Bihar's Jehanabad on January 28 for allegedly making inflammatory speeches at the Jamia Millia Islamia University and in Aligarh.

He was brought to Delhi the next day.

The court had earlier sent Imam to a five-day police custody. PTI URD

Earlier, Imam's mobile phone and laptop along with some anti-CAA posters were seized from his house in Bihar's Jehanabad and rented flat in Vasant Kunj, the police.

During investigation, a laptop and a desktop belonging to Imam were recovered from his rented flat at Vasant Kunj, Deputy Commissioner of Police (Crime) Rajesh Deo said.

His mobile phone was recovered from his house at his native place in Jehanabad's Kako area on the instance of his brother, he said.

Imam had prepared anti-CAA and anti-NRC pamphlets with "misleading and intimidating facts" and then distributed them in various mosques, the copy of which have been recovered, police said.

The shop from where he made photocopies of the pamphlets has also been identified, they added.

An FIR was registered against Imam by the Delhi Police on January 25 under IPC sections 124A (sedition) and 153A (promoting or attempting to promote disharmony or feelings of enmity on grounds of religion, race, place of birth, residence, language, caste or community or any other ground whatsoever) among others.