Sushma Swaraj died late Tuesday night at AIIMS after suffering a cardiac attack, doctors said. She was 67. A host of Union ministers and other senior party leaders visited AIIMS and met the bereaved family of the former external affairs minister. The body of former Union minister will be kept for three hours at the BJP headquarters on Wednesday for party workers and leaders to pay tributes, BJP working president J P Nadda said. Her last rites will be performed at the Lodhi crematorium, he said.

A powerful orator, an easily-accessible external affairs minister and a politician of many firsts, Sushma Swaraj was a loyal BJP soldier who was always ready to face a challenge. Swaraj’s attachment with the party ideology and principles was apparent even hours before she passed away as she tweeted to congratulate Prime Narendra Modi after the Centre’s move to revoke the special status for Jammu and Kashmir.

3.20 pm: Rajnath Singh, JP Nadda, Ravi Shankar Prasad, Piyush Goyal and other BJP leaders give shoulder to mortal remains of Sushma Swaraj as they are being taken from BJP headquarters to Lodhi crematorium in Delhi.

#VIDEO | @rajnathsingh , @JPNadda , @rsprasad , @PiyushGoyal & other @BJP4India leaders give shoulder to mortal remains of #SushmaSwaraj as they are being taken from BJP headquarters to Lodhi crematorium in Delhi, reports ANI.

3.05 pm: Dalai Lama on Sushma Swaraj: I offer my prayers and my condolences at this difficult time. Sushma Swaraj enjoyed immense respect for her compassionate concern for people&her friendly demeanour. In devoting herself to service of others, she led a very meaningful life. 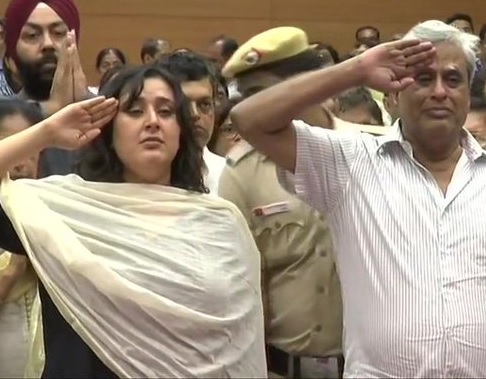 2.38 pm: Rashtriya Swayamsevak Sangh (RSS) on Sushma Swaraj: She was happy with the recent historic development in the nation, as she expressed before she left us. We express condolences to her family in this moment of grief.

2.30 pm: Jaya Prada, BJP: We called her ‘didi’ & today she is no more with us. She was a mother, a sister, a huge politician and a great orator as well. She did a lot for the country, especially for the poor. We have lost a great, honest and a remarkable leader.

1.50 pm: Harish Salve, Senior Advocate: For me, Sushma Swaraj ji was an elder sister. I was simply stunned yesterday on hearing about her demise. At 8:45 pm I had a talk with her. She said 'you have to come and take your fees of Re 1 for Jadhav case'. Just 10 min post that, she had a cardiac arrest.

1.20 pm: Zainab Bi, who was rescued from Saudi Arabia when late Sushma Swaraj was External Affairs Minister, breaks down while remembering her. 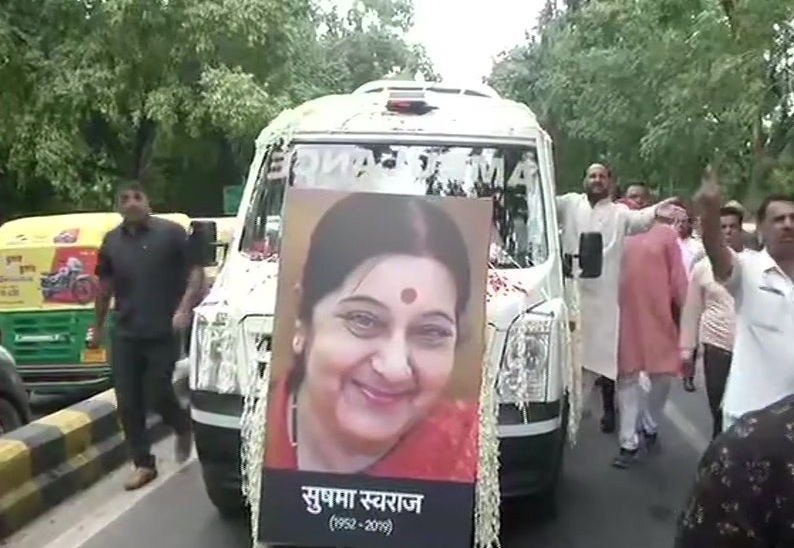 12.40 pm: Mortal reamains of Sushma Swaraj being taken to BJP headquarter in Delhi.

12.30 pm: Chinese Ambassador to India Sun Weidong: Sad to learn about the passing away of Sushma Swaraj, former Minister of External Affairs of India. Appreciate her contributions to China-India relations. Express my deep condolences to her family.

12.20 pm: Geeta, the Indian girl who was brought back from Pakistan in 2015 when late Sushma Swaraj was External Affairs Minister, pays tribute.

11.55 am: Sarabjit Singh's sister Dalbir Kaur: Could not believe that she would leave us so soon, still can't. It's a huge loss for the entire country. She always helped people. Whether it was Hamid Ansari, Sarabjit, Geeta or Jadhav, she helped all. May her soul rest in peace.

11.50 am: Uttarakhand Chief Minister Trivendra Singh Rawat: Extremely sad over the sudden demise of former External Affairs Minister Sushma Swaraj. It's a huge loss for the nation. I pay tributes. We have declared state mourning today.

11.45 am: Picture from BJP headquarter in New Delhi. 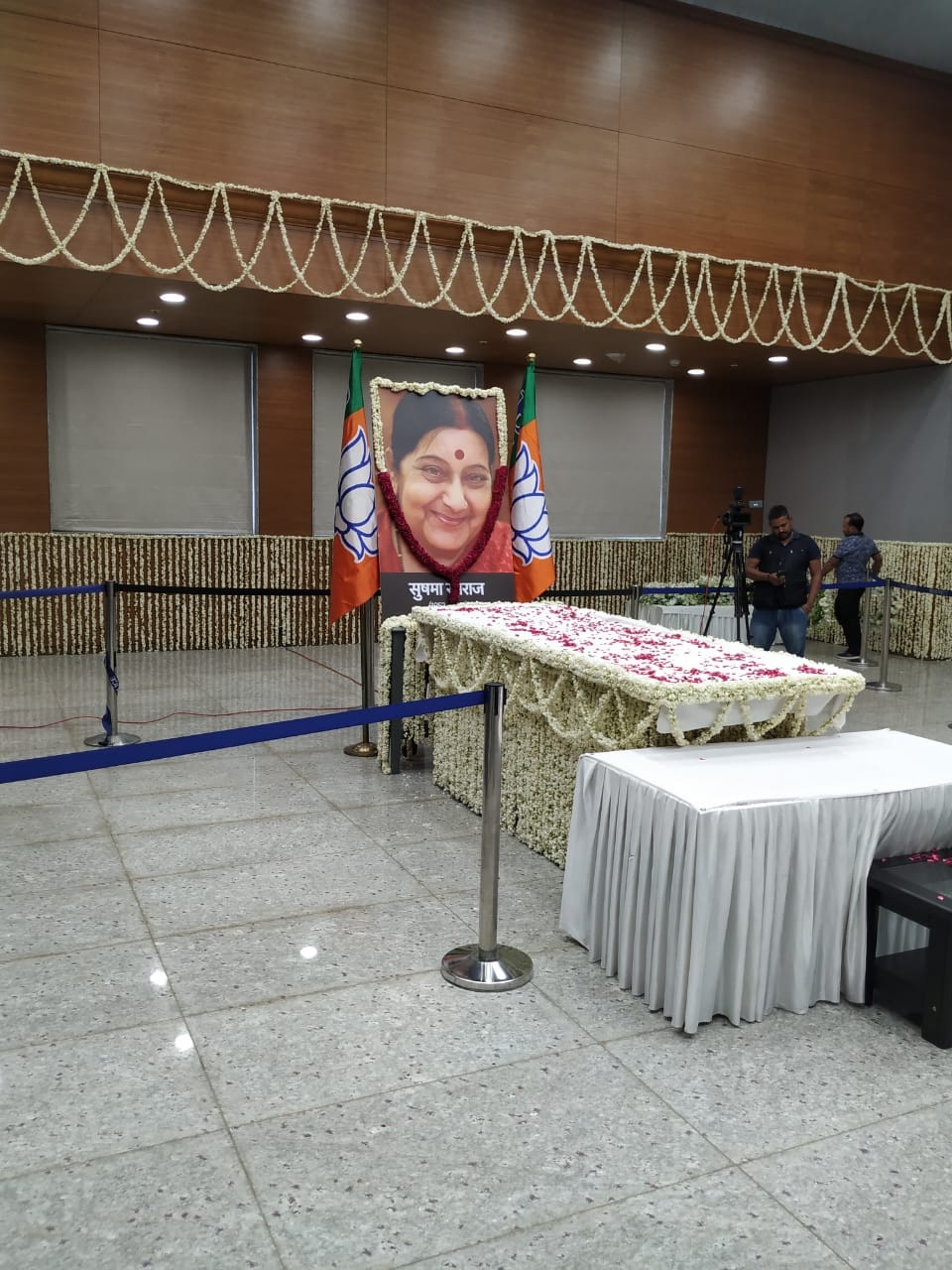 11.40 am: Lok Sabha Speaker Om Birla: Sushma Swaraj ji was an ambassador of the Indian culture. She was an able administrator and a sensitive leader. Today the entire country is sad to lose a leader like her. She understood everyone's problems&served them. We are standing with her family.

11.15 am: Rajya Sabha Chairman M Venkaiah Naidu and members of the House pay tribute to former EAM Sushma Swaraj. M Venkaiah Naidu says, "In her untimely demise, the nation has lost an able administrator, an effective parliamentarian and a true voice of people."

11.10 am: Jammu and Kashmir Governor Satya Pal Malik: Express grief over the sudden demise of former Union Minister & veteran political leader Sushma Swaraj. It's difficult to fill the space left by her. I pray for peace to departed soul and strength to the bereaved family in their hour of grief.

9.40 am: The body of former Swaraj will be kept for three hours at the BJP headquarters on Wednesday for party workers and leaders to pay tributes, BJP working president J P Nadda said. Her last rites will be performed at the Lodhi crematorium.

9.35 am: Sushma Swaraj did not contest the 2019 Lok Sabha elections and chose to sit out of the government this year on account of her health. After PM Modi's swearing-in ceremony last month, Sushma Swaraj wrote a message on Twitter, thanking PM Narendra Modi for giving her the opportunity to hold the office for five years.

9.30 am: Sushma Swaraj started her political life with the Akhil Bharatiya Vidyarthi Parishad, the RSS’ student wing, and later joined the BJP. She was the Information and Broadcasting Minister in the 13-day Atal Bihari Vajpayee government in 1996 and got the Cabinet portfolio again after he led the BJP to power in 1998.