Swaroop Raj, Assistant VP, was placed under temporary suspension to have a fair inquiry: Genpact India

The Body Of The 35-year-old Senior Executive Was Found Hanging From The Ceiling Fan At Their Apartment In The Paramount Floraville Society By His Wife Around 11.30 Pm On Wednesday.

A day after Swaroop Raj, the former assistant vice president of Genpact India was found dead at a highrise apartment in Sector 137 of Noida, the professional services firm on Thursday released an official statement, saying that the company's foremost priority is to protect the privacy of the deceased employee and at this stage they would prefer not to divulge the details of the complaint. In reference to Raj's suspension, Genpact India said, "we want to emphasise that the complaint made serious allegations of sexual harassment which were to be duly investigated by the Internal Complaints Committee ("ICC")".

"To have a fair, uninfluenced inquiry, he was placed under temporary suspension pending the closure of the inquiry in line with legal requirement and company policy so that ICC could carry out a reasonable investigation into the allegations received from two female employees," the statement, released on Twitter read.

It is with deep sorrow that we confirm the news of an employee’s untimely death. Our heart goes out to his family during this time of grief. In view of the dialogue surrounding this event, here is our official statement. pic.twitter.com/Gnfmr2OKf1

The senior executive allegedly killed himself after being suspended from his job over sexual harassment allegations. In the purported suicide note addressed to his wife, Swaroop said that all the allegations were untrue.

Here's the full suspension letter that was handed over to Swaroop Raj by Genpact: 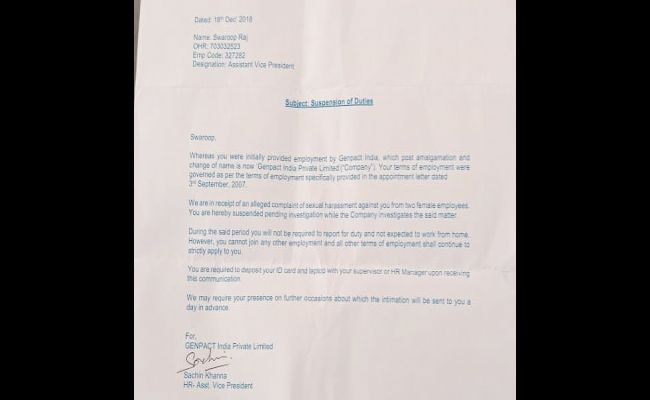 The body of the 35-year-old senior executive was found hanging from the ceiling fan at their apartment in the Paramount Floraville society by his wife around 11.30 pm on Wednesday. In the suicide note, he explained what made him take the extreme step.

Swaroop Raj belonged to Gurugram and lived in the Noida society with his wife. They had been married for two years. Two female employees from Genpact had accused him of sexual harassment on December 12 and the company had suspended him on December 18 till the investigations in the case were complete. In his purported suicide note, he denied the allegations and said that even he was proven innocent, his reputation had been tarnished for life and he wouldn't be able to return to the office. He also wrote that he loved his wife dearly and that she should be strong and live with respect. 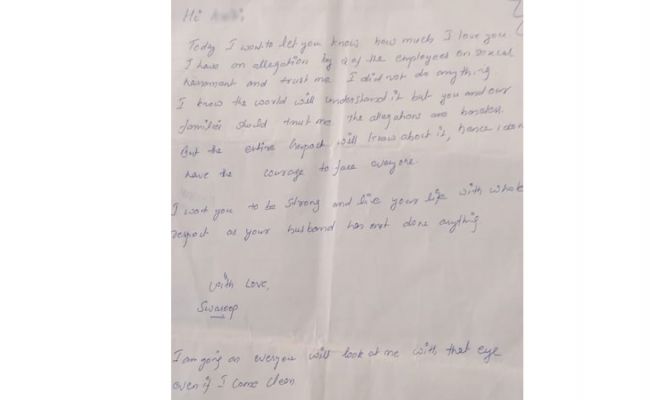 Condoling the demise of the former assistant vice president, Genpact further said, "This is a very difficult time for all of us, as an organization and as friends and colleagues of the deceased. Our hearts go out to his family in this time of grief. We implore the public and media to give them the space and dignity they deserve".