In what could be a big blow for RLSP chief Upendra Kushwaha ahead of Lok Sabha election 2019, two party MLAs and an MLC on Friday dashed a letter to Election Commission, claiming their control over the party. Their demands include the granting of the RLSP symbol - Ceiling Fan - by the central poll panel to them. In an unprecedented incident, Kushwaha has been facing revolt from Bihar legislators, who oppose his decision to join the Congress-RJD-led Grand Alliance (Mahagatbandhan) in the state.

MLAs Sudhanshu Shekhar, Lalan Paswan and MLC Sanjiv Singh Shyam have accused Kushwaha of pursuing personal interests in announcing a break up with the BJP-led National Democratic Alliance (NDA) on December 20. They also pitched for a ministerial berth for Shekhar, a first-term MLA and the youngest among the three.

"We had been stating since long that we were in favour of the RLSP remaining in the NDA but Kushwaha, who was more interested in his personal gains, paid no heed, Shyam said pointing to the RLSP chief's decision to quit the NDA on December 20.

In a veiled attack at Kushwaha, Paswan, described him incapable of managing two MLAs and an MP. "Kushwaha calls Nitish Kumar his elder brother and yet has all sorts of problems with the latter. He, however, feels no discomfort in paying obeisance to RJD leader Tejashwi Yadav," he added.

Announcing their separation from Kushwaha, the legislators also said that the RLSP was heading towards a split and have the support of most workers in their decision to stay back with the NDA. 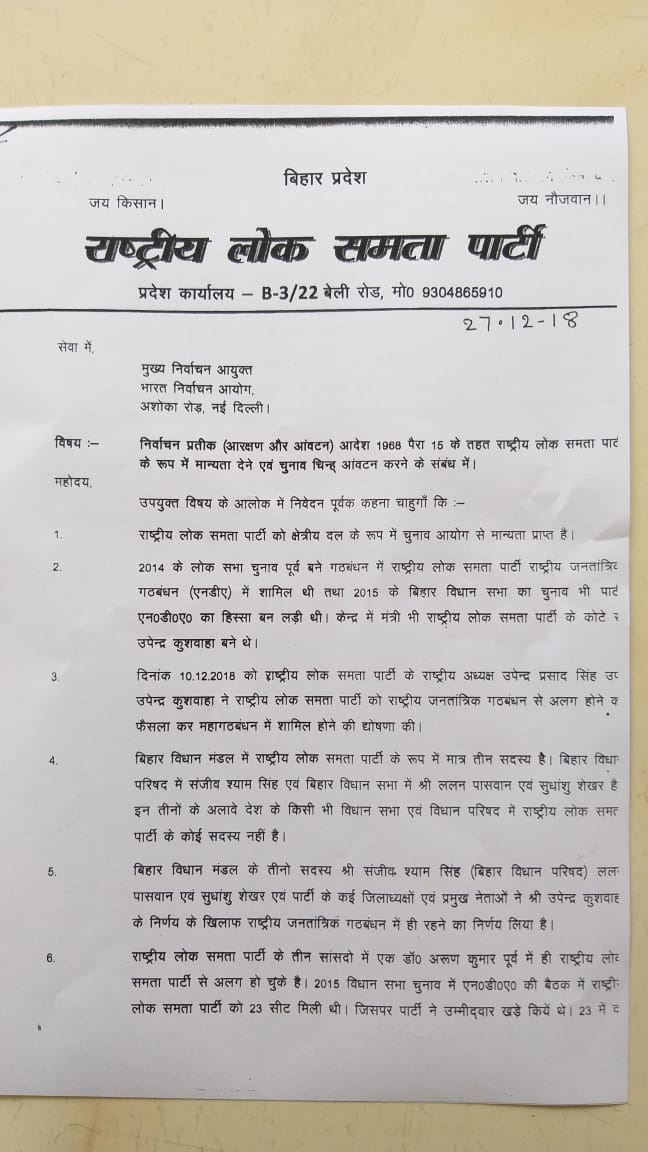 Shyam further alleged that Khushwaha had of late been making noises about the RLSP bot being considered for a ministerial berth after Chief Minister Nitish Kumar returned to the NDA last year. In reality, he never tried. When ministerial berths were being allocated among allies he was simply roaming around in Patna, Shyam claimed.

Khushwaha was happy with his own ministerial berth at the Centre. After that his entire attention had been on getting a deal that served his interests better. He simply did not care that somebody from his party should get a ministerial berth in the state as well, he added.

Replying to a query, he said neither he nor Paswan want ministerial berths. We would like Sudhanshu Shekhar's inclusion in the state council of ministers and we would be hugely disappointed if he is not considered for the same, he said.

We are not defectors. Rather, we represent the real RLSP. Our stance is in line with the sentiments of most workers and office-bearers in the party. We will soon be approaching the Election Commission with our claim, Shyam added.

NDA leaders in Bihar were not immediately available for comments on the development. However, rumblings within the party had come to the fore last month when Shekhar and Paswan turned up at a meeting of BJP legislature party held at the residence of Deputy Chief Minister Sushil Kumar Modi.

The two other Lok Sabha members from the RLSP include Arun Kumar from Jehanabad and Ram Kumar Sharma from Sitamarhi. However, Kumar, the rebel MP has been charting an independent course for the last two years.

Sharma, who initially made statements in favour of NDA later changed his stance and was seen with Kushwaha when he had announced his resignation from the cabinet and also severing ties with the NDA in Delhi.