While The Entire House, Including Sonia Gandhi Broke Into A Huge Round Of Applause, Appreciating The Previous BJP Government For The Historical Uri And Balakot Surgical Strikes, Rahul Gandhi Kept Staring At The Floor Unmoved.

Trouble found Congress chief Rahul Gandhi yet again on Thursday, this time for not paying attention to President Ram Nath Kovind's address at a joint session of both the houses - Rajya Sabha and Lok Sabha - in Parliament. Much to everyone's surprise, the Gandhi scion was seen busy on his phone as he spent most of the time by scrolling through the news feed, typing some texts and clicking photographs, during Kovind's one-hour-long speech at Parliament.

The Congress president was also seen talking to his mother Sonia Gandhi for about 20 minutes while Kovind was speaking about the key achievements of the Modi 1.0 dispensation in the last five years. However, the UPA chairperson was found attentive to the President's speech and even applauded in between. Whereas, Rahul did not bother to laud the President for any of the topics he spoke on.

While the entire House, including Sonia Gandhi broke into a huge round of applause, appreciating the previous BJP government for the historical Uri and Balakot surgical strikes, Rahul Gandhi kept staring at the floor unmoved. This abrupt behaviour of the Gandhi scion prompted Sonia to stare at him for several times though his attitude remained unchanged.

Meanwhile, social media is deluged with various posts, trolling the Congress chief brutally for his irresponsible behaviour. While some Twitterati wonder if he was searching for "How to behave in Parliament", others ask - "What would have been the scenario if he was elected the prime minister of India!"

READ | Firm on stepping down as Congress chief, Rahul Gandhi says party will decide his successor

Check out the reactions here: 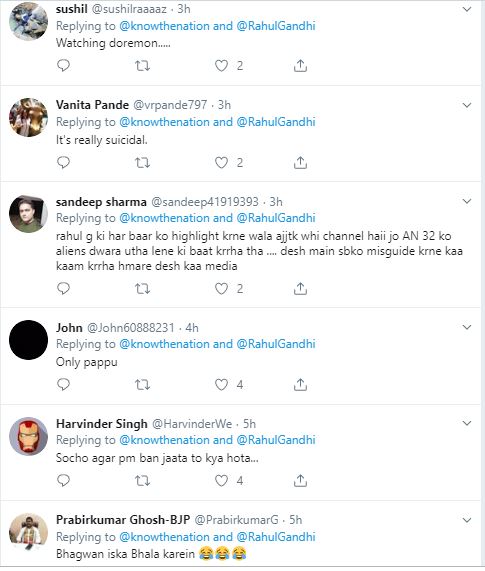 The Bharatiya Janata Party Kisan Morcha also took to Twitter and posted a video showing Gandhi busy on his phone.

The Parliament session of the 17th Lok Sabha, which began on July 17, is scheduled to culminate on July 16. During the session, the Modi 2.0 government will present the Union Budget for the financial year 2019-20. The Budget will be presented by Finance Minister Nirmala Sitharaman on July 5 following the economic survey on July 4.