Your Aadhaar card can make you rich! Here's your step-by-step guide for Rs 30,000 cash prize

Aadhaar contest: The Prize money will be sent to the winner’s Aadhaar linked bank account only

Win Rs 30,000 by your Aadhaar card! Unbelievable? UIDAI has organised a contest for Aadhaar card holders named ‘Your Aadhaar Online’. The competition is open to all the residents of India and the last date to participate is July 8, 2019.  The qualifiers will be communicated via email by August 31, 2019. If you have participated and you are not contacted, assume that your video has not been short-listed.

What is Aadhaar contest all about?

There are 15 categories of Aadhaar Online Services on which participants can make tutorial videos. The most creative and explanatory videos will have a chance to win a cash prize of up to Rs 30,000. 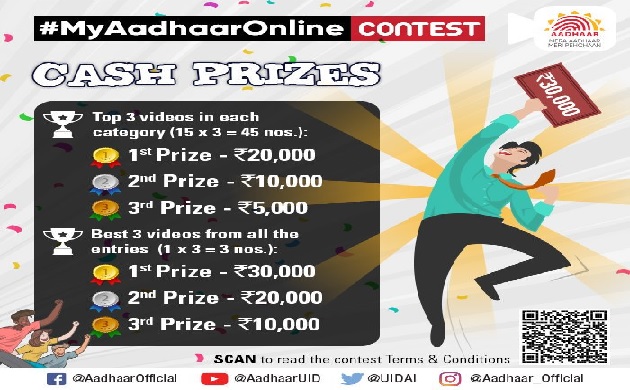 Top 3 videos in each category

The Prize money will be sent to the winner’s Aadhaar linked bank account only. Result will be posted on Social Media on or before August 31, 2019.

Aadhaar Contest: How to participate?
Make a short graphical/ animation video tutorial on ANY of the below listed Aadhaar Online Services: