Guests Will Get To See A Musical Fountain And Even A Dance Show Which Is Set On The Theme Of The Raas Leela Of Lord Krishna And Radha And The Gopikas Of Vrindavan.

The year's most awaited wedding that will see the presence of all the big wigs of the country will start in a few hours. Asia's richest businessman Mukesh Ambani's son Akash Ambani will exchange wedding vows with Shloka Mehta, daughter of diamantaire Russell Mehta.
Â

Â TheÂ numerous pre-wedding bashes at India and overseas and the lavish Mehendi ceremony is proof enough to predict the magnanimity and exuberance of the final ceremony, the wedding that will take place at the Trident Hotel.

New Indian Express has reported that there will be a splendid performance a day after the ceremony. It will see a musical fountain and even a dance show which is set on the theme of the Raas Leela of Lord Krishna and Radha and the Gopikas of Vrindavan.Â
Â

A musical fountain will set the mood of the evening and soon, it will be followed by a dance performance and an aerial dance act above the stage, to signify a symmetry between water, earth and sky. The performance is said to be a collaboration between 150 Indian and international artistes and it will be held at the Dhirubhai Ambani Square at the Bandra Kurla Complex in Mumbai on Sunday.Â
Â

Â Interestingly, the musical fountain was inaugurated a few days ago during theÂ Anna Seva programma and foundation of Dhirubhai Ambani Square by Nita Ambani, mother of Akash. The function served dinner to 2,000 underprivileged children from various city-based NGOs.Â 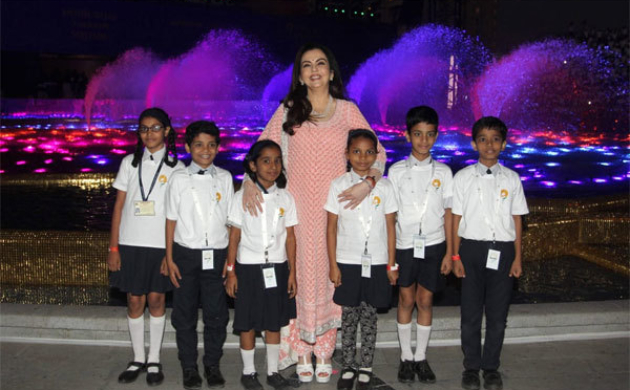 The baraat will assemble at 3:30 pm at the Trident Hotel today for the wedding following which, there will be a high tea and â€˜mangal vivahâ€™ at 6:30 and dinner later at the Jio World Centre.