Music Composer Shekhar Ravjiani Recently Had An Hair-raising Moment When He Was Charged Rs. 1,672. For Three Egg-whites At A Five Star Hotel In Ahmedabad.

Music composer Shekhar Ravjiani recently had an hair-raising moment when he was charged Rs. 1,672. For three egg-whites at a five star hotel in Ahmedabad.

The music composer took to social media to share the bill that clearly states, that three boiled eggs cost him Rs 1350 and after service charge of Rs 67.50 and CGST and SGST of Rs 127.80 each. The composer, one half of the hit pair "Vishal-Shekhar", wrote on Twitter: "Rs. 1672 for 3 egg whites??? That was an Eggxorbitant meal."

Rs. 1672 for 3 egg whites???
That was an Eggxorbitant meal ðŸ¤¯ pic.twitter.com/YJwHlBVoiR

Soon the followers of the music director started trolling the hotel for absurd pricing of its services. Some even jokingly enquired about the breed of the hen that gave away the eggs. One of the followers commented, “It's similar to artist lipsinging on stage during live concert.. you pay for value, ambience and experience not for the product.. duh..” 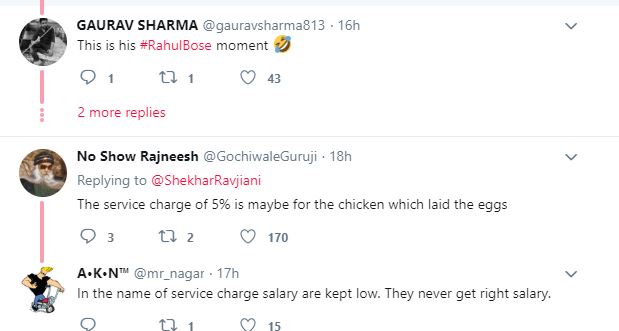 In July, actor Rahul Bose had shared a clip on Twitter when he ended up paying Rs. 442 for two bananas at a luxury hotel in Chandigarh. The pricey bananas took Twitter by storm and users took the opportunity to post about their own ''Rahul Bose moments''.

You have to see this to believe it. Who said fruit wasn’t harmful to your existence? Ask the wonderful folks at @JWMarriottChd #goingbananas #howtogetfitandgobroke #potassiumforkings pic.twitter.com/SNJvecHvZB

As his tweet went viral, a fine of Rs. 25,000 was imposed on the hotel by the Excise and Taxation Department for overcharging the actor.

Shekhar, known for chartbusting Hindi film songs like ‘The Hook Up Song" from the Student of the Year 2 has also appeared as a judge for reality shows. He also made his acting debut with Sonam Kapoor’s Neerja. He recently revealed plans to start his own publishing company.