What Is More Interesting Is That The ESA Will Be Officially Launching Its JUICE In 2022, But It Has Already Captured The Image.

The European Space Agency (ESA)’s Jupiter Icy Moons Explorer (JUICE) has recently captured an image of Jupiter and its four largest Moons. The image was captured by a team of engineers on the roof of the Airbus Defence and Space site in Toulouse. What is more interesting is that the ESA will be officially launching its JUICE in 2022, but it has already captured the image.

To save fuel and allow for a bigger payload, the spacecraft will reach Jupiter by means of a series of slingshot orbits that will see it fly by, Earth, Venus, Earth again, Mars, and Earth one last time before arrival at the Jovian system in October 2029.

Once on station, this whizzing about will only just be getting started as Juice ducks in and out of Jupiter's radiation belts, performing a series of flybys of the moons Europa, Ganymede, and Callisto before going into orbit around Ganymede in September 2032. It will remain there until it runs out of propellant, after which mission control will order it to make a controlled impact on the icy moon in February 2034.

Also Read: Asteroid 2019 GT3 TO Come Extremely Close To Earth THIS Friday: Biggest Threat To Us 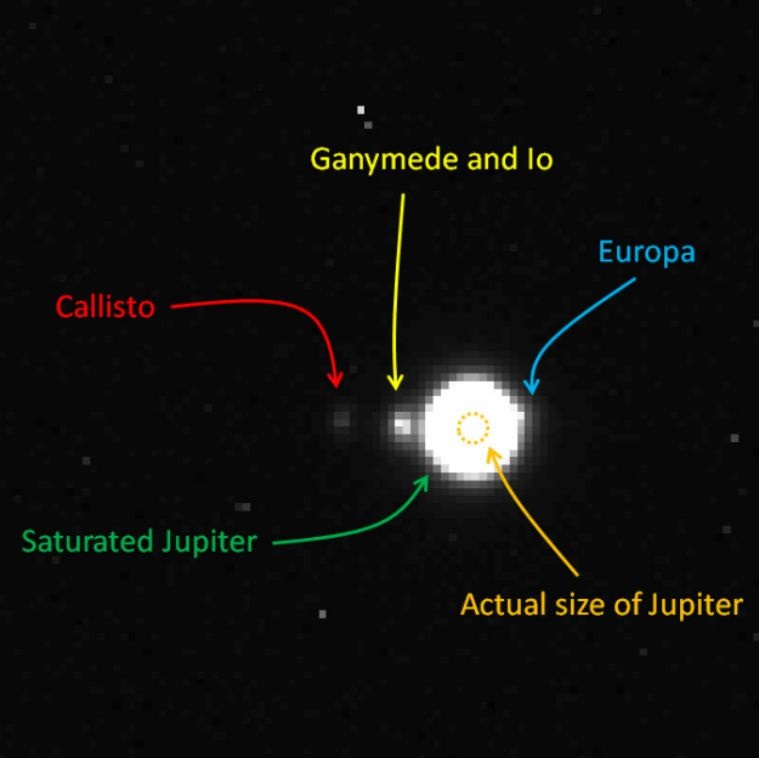 The Navigation Camera (NavCam) of the Jupiter Icy Moons Explorer (JUICE) has been given its first glimpse of the mission’s destination while still on Earth. (Image source: ESA/Airbus Defence and Space)

According to ESA, this requires the NavCam to be specially hardened against radiation as well as being able to take accurate images of moons, planets, and stars. To achieve this end, engineers in June took an engineering prototype of the NavCam up on a roof as part of a series of evaluation tests, including onboard image processing. This saw the device take images of the Moon, stars, and Jupiter itself, catching unexpectedly clear pictures.

READ | Asteroid Alert: NASA, ESA To Team Up To Save Humans By Crashing Spaceship Into THIS Massive Space Rock

"Unsurprisingly, some 640 million km (398 million mi) away, the moons of Jupiter are seen only as a mere pixel or two, and Jupiter itself appears saturated in the long exposure images needed to capture both the moons and background stars, but these images are useful to fine-tune our image processing software that will run autonomously onboard the spacecraft," says Gregory Jonniaux, Vision-Based Navigation expert at Airbus Defence and Space. "It felt particularly meaningful to conduct our tests already on our destination."