If Successful, The Rs 978 Crore Mission Will Make India The Fourth Country After Russia, The US And China To Pull Off A Soft Landing On The Moon.

India's second lunar mission Chandrayaan-2, launched on July 22, will attempt a touchdown on unchartered lunar south pole between 1:30 am and 2:30 am on Saturday. Dubbed as the most complex and prestigious mission ever undertaken by the Indian Space Research Organisation (ISRO), Chandrayaan-2 has three elements including the Rover, the Lander and the Orbiter. Prime Minister Narendra Modi along with 60 students from across India will be at the ISRO Centre in Bengaluru to witness the "extraordinary moment in the history of India's space programme". Meanwhile, ISRO is aiming for a soft landing of lander 'Vikram' in the South Pole region of the Moon where no country has gone so far. If successful, the Rs 978 crore mission will make India the fourth country after Russia, the US and China to pull off a soft landing on the Moon.

"We are proud of our scientists. They have created history. No need to lose heart. Our scientists have done a great job," said Arvind Kejriwal

"The nation stands by the entire team of @isro as we wait in these tense times. Your hard work and commitment has made our nation proud. Jai Hind," tweets Congress.

"We are with you @isro. You have brought the nation, it's young minds and all, together in sensing your achievements in Space. You will succeed," tweeted Nirmala Sitharaman.

India is proud of our scientists! They’ve given their best & have always made India proud. These are moments to be courageous, & courageous we will be! Chairman ISRO gave updates on Chandrayaan-2. We remain hopeful&will continue working hard on our space programme, tweets PM Modi.

There are ups and downs in life. This is not a small achievement. The nation in proud of you. Hope for the best. I congratulate you. You all have done a big service to nation, science and mankind. I am with you all the way, move forward bravely: PM Modi

‘Nation is proud of you, be courageous’: PM Modi tells ISRO scientists as contact with Vikram lander lost

Vikram lander descent was normal upto an altitude of 2.1 km, subsequently, the connection was lost: ISRO

Karnataka: #ISRO Chief K Sivan has briefed Prime Minister Narendra Modi about the status of landing of #VikramLander on the south pole of the moon. #Chandrayaan2Landing pic.twitter.com/MyjCji8Ukj

Vikram Lander minutes away from touching the lunar surface.

Vikram Lander begins its descent to the South Pole region of the moon.

60 students from across the country, who were selected through ISRO's 'Space Quiz' competition will watch the landing along with PM

PM Modi at the ISRO Centre in Bengaluru to watch the soft landing of Vikram lander on South Pole region of moon.

Karnataka: PM Modi at the #ISRO Centre in Bengaluru to watch the soft landing of Vikram lander on South Pole region of moon. 60 students from across the country, who were selected through ISRO's 'Space Quiz' competition will watch the landing along with PM. #Chandrayaan2 pic.twitter.com/e166MErF9X

We are 26 minutes away from initiating the process of landing, says ISRO.

According to ISRO, 'Pragyan' can only communicate with the lander, while 'Vikram' has the capability to communicate with IDSN (Indian Deep Space Network) at Byalalu near Bengaluru, as well as with the orbiter and rover.

The mission objective is to locate presence of water and other important minerals on the lunar surface.

Vikram's mission period is of 14 earth days during which time, various tests will be conducted.

Hours after the touchdown, Vikrams door will open creating a slope for the matchbox shaped rover with six-wheels to slide and move around the lunar surface to carry out various investigations.

Two navigation cameras, which could be called as its left and right eye, are mounted on top of it besides an Alpha particle X-ray spectrometer, receive and transmit antenna and rocker bogie assembly.

The cubical vehicle, exclusively designed for travelling on the moon, is fitted with a solar panel.

The second de-orbiting manoeuvre executed in nine seconds on September 4.

The fifth and lunar manoeuvre of Chandrayaan-2 executed successfully on September 1.

The second Moon image captured by Chandrayaan-2 was released on August 26. 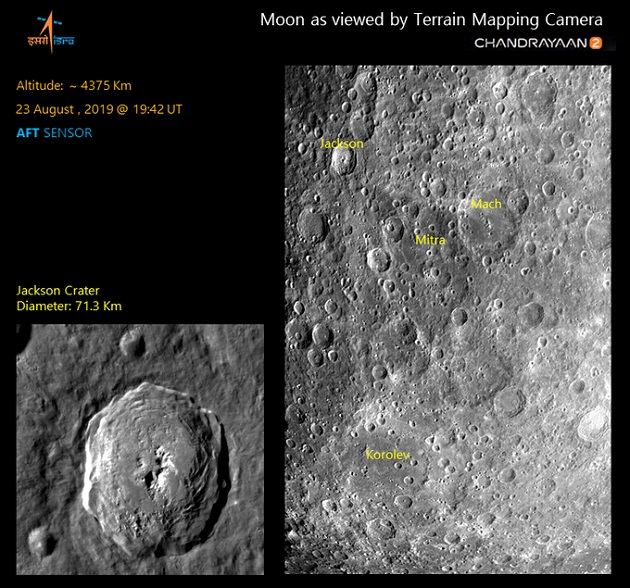 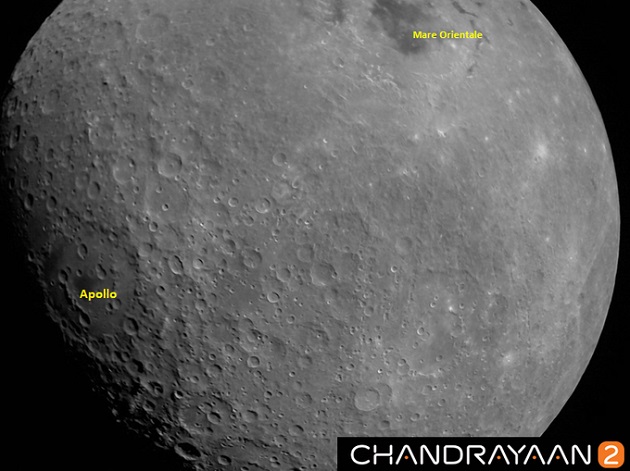 After revolving around the earth's orbit for nearly 23 days, Chandrayaan-2 on August 14 entered the Lunar Transfer Trajectory.

Fifth and the last orbit-raising manoeuvre of Chandrayaan-2 performed on August 6.

On August 3, ISRO released the first set of earth pictures captured by Chandrayaan-2.

Ahead of the final descent of Chandrayaan-2 on the Lunar South Pole, here are the visuals from ISRO Monitoring Centre in Bengaluru.

The final descent of #Chandrayaan2 to take place on the Lunar South Pole, tonight. #Visuals from ISRO Monitoring Centre in Bengaluru. pic.twitter.com/dZTcjmkg6G

Watch behind the scene images of India's much-anticipated Chandrayaan-2 mission. 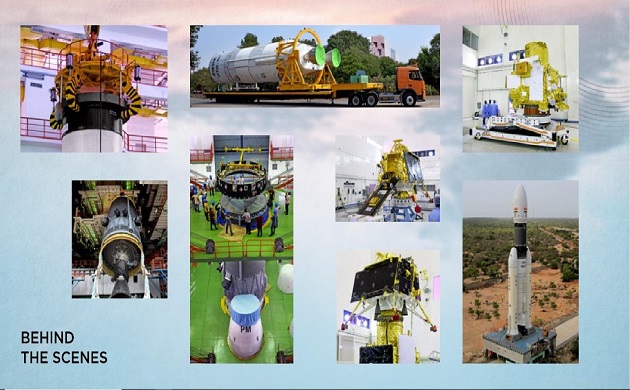 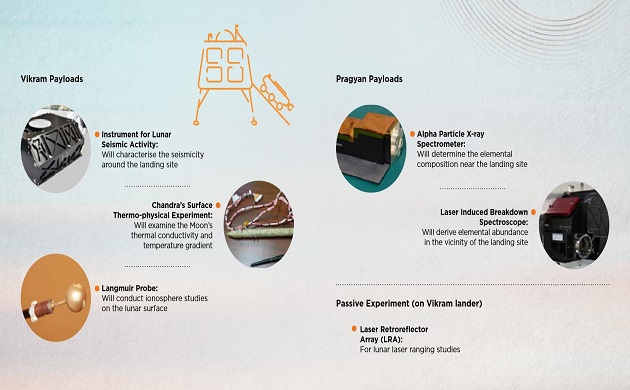 Pragyan - Chandrayaan-2's rover is a 6-wheeled robotic vehicle, which translates to 'wisdom' in Sanskrit. It can travel up to 500 m (0.5 km) at a speed of 1 cm per second and leverages solar energy for its functioning. 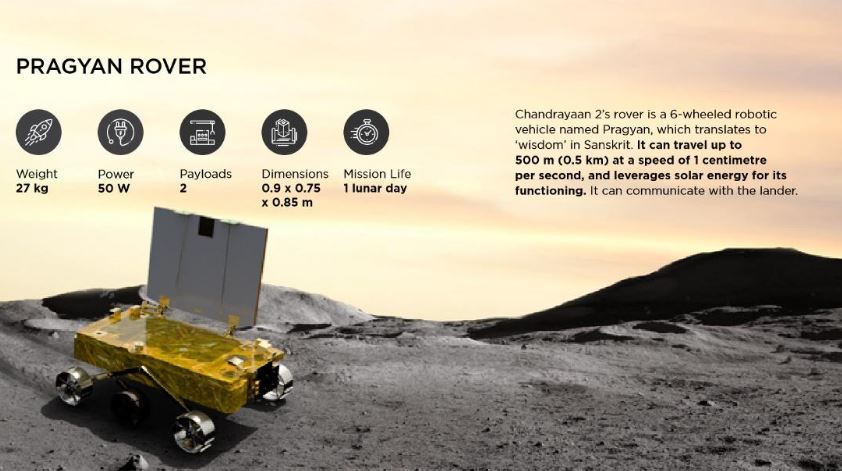 'Vikram' - Chandrayaan-2's lander, is named after Dr Vikram A Sarabhai, the Father of the Indian Space Programme. It is designed to function for one lunar day, which is equivalent to about 14 Earth days.

At the time of launch, Chandrayaan-2 Orbiter will be capable of communicating with Indian Deep Space Network at Byalalu, as well as with Vikram lander. 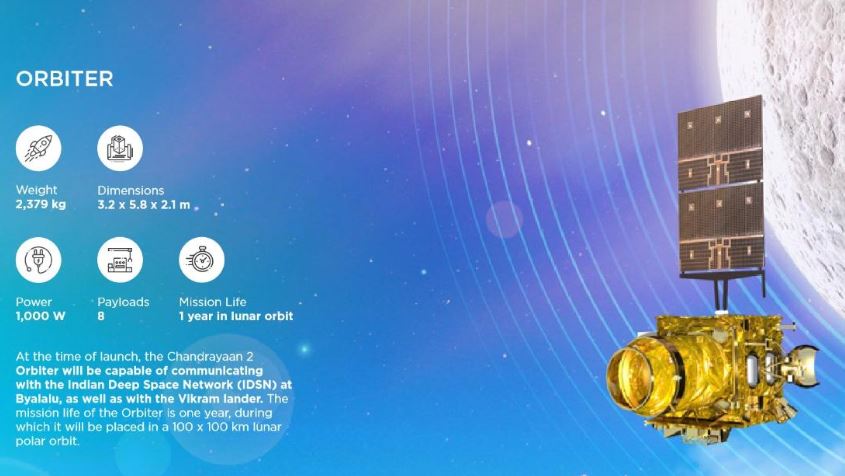 Chandrayaan-2 will be aided in achieving its mission by some of India’s most advanced engineering marvels. Its composite module, comprising technology and software developed across India, includes a wholly indigenous rover and India's 1st lander capable of executing a 'soft landing'. 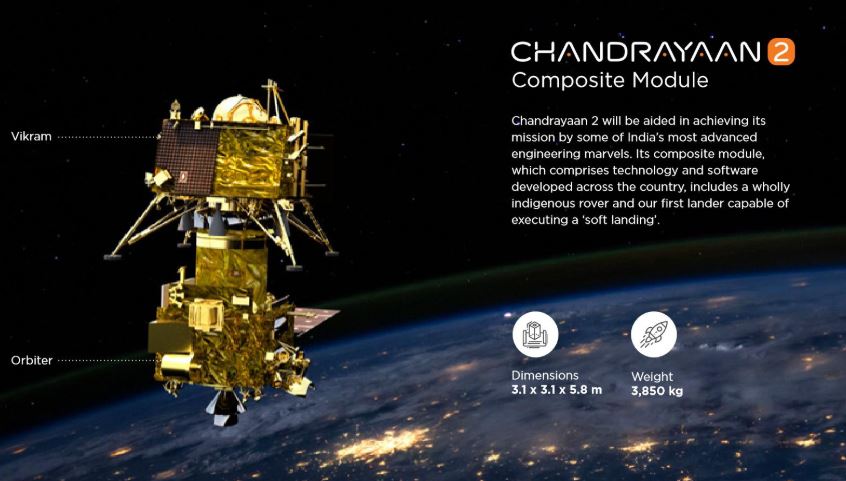 Hours before Chandrayaan-2 landing on Moon, Prime Minister Narendra Modi arrives at Bengaluru Airport. He will reach ISRO centre in the state.

The GSLV Mk-III will carry Chandrayaan-2 to its designated orbit. This three-stage vehicle is India’s most powerful launcher to date, and is capable of launching 4-tonne class of satellites to the Geosynchronous Transfer Orbit (GTO). 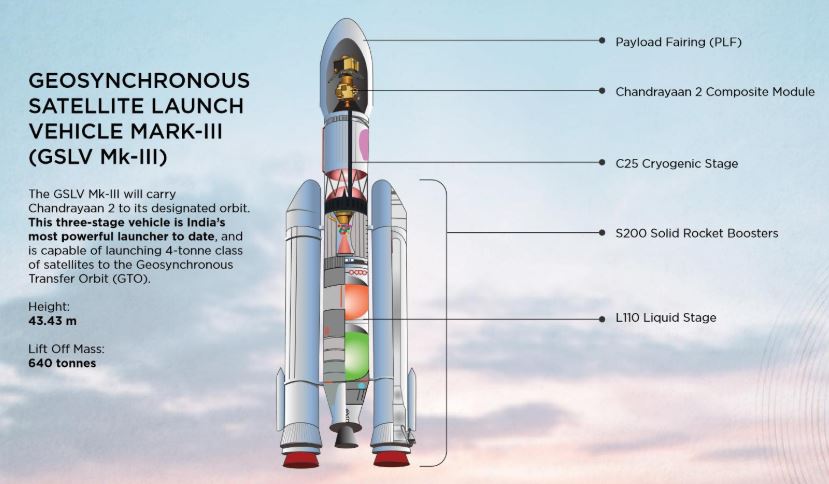 Here are the details of flight sequence of Chandrayaan-2.

The second earthbound orbit-raising manoeuvre for Chandryaan-2 spacecraft performed on July 26 while the third one took place on July 28.

The first earthbound orbit-raising manoeuvre for Chandryaan-2 spacecraft was performed successfully on July 24. 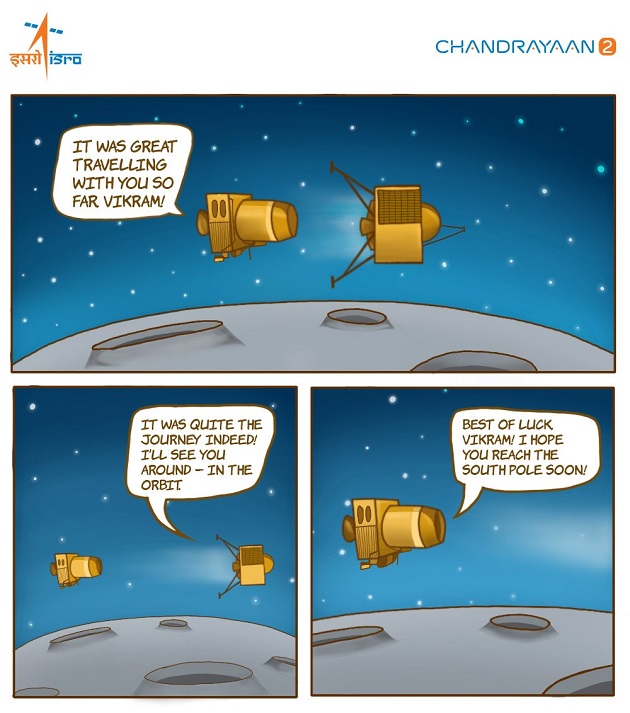 National Geographic will broadcast live the historic landing of Chandrayaan-2 on the surface of the Moon.

Ever wondered about Pragyan’s different parts and how it functions? Watch the full video to find out!https://t.co/EuL6Gf72Jd#ISRO #Chandrayaan2 #Moonmission

Click selfies, I will retweet, says an excited PM Modi.

I urge you all to watch the special moments of Chandrayaan - 2 descending on to the Lunar South Pole! Do share your photos on social media. I will re-tweet some of them too.

Chandrayaan-2: How, When And Where To Watch Vikram Lander Moon Landing Online 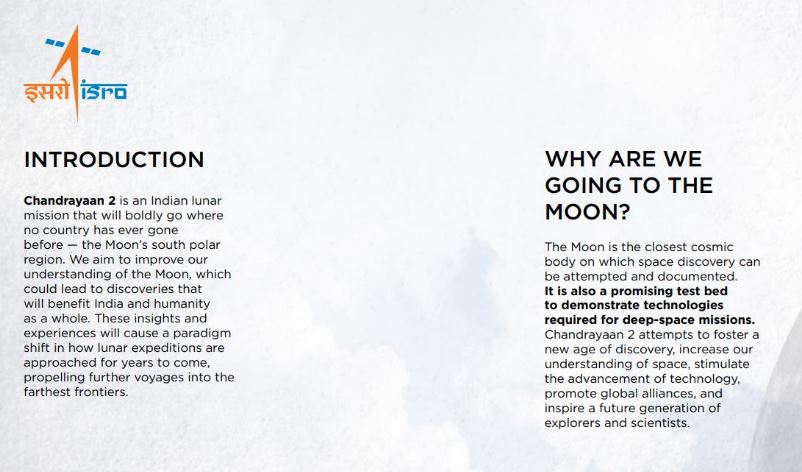 Former NASA astronaut Jerry M Linenger, who is in the country to promote a special program on India's space mission Chandrayaan-2, featuring him as space analyst, said that the landing Chandrayaan-2 on the south pole of the moon is a milestone for the entire world and not just India.

The crucial landing of 'Vikram', Chandrayaan-2's moon lander, will be carried out by at least eight onboard equipment in a coordinated manner.

Around 70 students are busy packing their bags for Bengaluru to watch Chandrayaan-2's scheduled soft-landing on the moon with Prime Minister Narendra Modi at the Indian Space Research Organization headquarters on Saturday.