Greenland might be ice-free by end of century, picture reveals awful reality

Steffen Olsen, Of The Danish Meteorological Institute (DMI), Also Captured An Image That Depicts The Awful Reality Of Melting Ice In Greenland.

An atypical study led by a group of scientists from the University of Alaska Fairbanks Geophysical Institute in the US found that Greenland, which has been witnessing a rapid rise in temperature from the last few weeks, might be ice-free by the end of this century. The island could lose 4.5 per cent of its ice, contributing up to 13 inches of sea level rise, as the sudden change in weather led to early arrival of annual ice melt.

"If greenhouse gas concentrations remain on the current path, the melting ice from Greenland alone could contribute as much as 24 feet to global sea level rise by the year 3,000, which would put much of San Francisco, Los Angeles, New Orleans and other cities under water, the study appeared in the journal Science Advances.

Talking about the latest findings, lead author Andy Aschwanden said, "How Greenland will look in the future - in a couple of hundred years or in 1,000 years - whether there will be Greenland or at least a Greenland similar to today, it's up to us". Currently, the planet is moving toward the high estimates of greenhouse gas concentrations.

The research has been conducted on the basis of new data on the landscape under the ice today in a bid to make breakthroughs in modelling the future. Scientists also used data from a NASA airborne science campaign called 'Operation IceBridge'.

Steffen Olsen, of the Danish Meteorological Institute (DMI), also captured an image that depicts the awful reality of melting ice in Greenland. Olsen described it as "rapid melt". 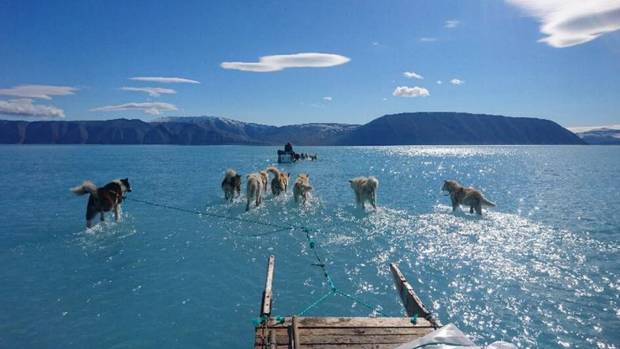 Sled dogs are seen running through water where ice used to be in Greenland. Photo Courtesy: Steffen Olsen

Ice climatologist at the Geological Survey of Denmark and Greenland, Jason Box said, "The melting is big and early", adding that "Extreme events, here flooding of the ice by abrupt onset of surface melt, call for an increased predictive capacity in the Arctic".

Between 1991 and 2015, Greenland's ice sheet has added about 0.02 inches per year to sea level, but that could rapidly increase. The communities in Greenland relied heavily on the sea ice to survive for transport, hunting and fishing.

Meanwhile, satellite images also reveal that Greenland is not the only area seeing unheard-of melting. The Himalayas are now melting twice as fast as they used to. The Asian mountain range, which includes Mount Everest, has been losing ice at a rate of about one per cent a year since 2000, according to a study in the journal Science Advances.