Partial Lunar Eclipse TODAY: When and where to watch?

Partial Lunar Eclipse, Three-hour-long Rare Phenomenon Will Begin Around 1.31 Am On Wednesday And Will Be At Its Pick Around 3 Am

Partial Lunar Eclipse: Apart from India, the celestial phenomenon will be visible in parts of South America, Europe, Africa, Asia and Australia

The lunar eclipse on July 16 will be the last of its kind in 2019. It is a special coincidence as it will be occurring with Guru Purnima after 149 long years. It will be visible across Australasia (Australia, New Zealand, and some neighbouring islands), most parts of Asia, Africa and Europe except northern most Scandinavia, and most of South America. The total eclipse duration will be 2 hours, 57 minutes and 56 seconds. 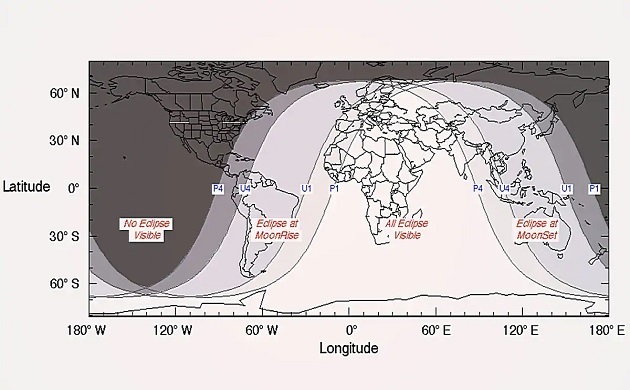 (NASA image showing regions from where the eclipse will be visible)

Partial Lunar Eclipse: When to watch?

For those waiting eagerly to witness the rare natural phenomenon on July 16-17 night, the three-hour-long eclipse will begin around 1.31 am on Wednesday and will be at its pick around 3 am. The Moon will remain partially eclipsed till 4:29 am, leaving a golden opportunity for the sky gazers to watch the greatest partial eclipse almost throughout the night. Apart from India, the celestial phenomenon will be visible in parts of South America, Europe, Africa, Asia and Australia.

What is a partial lunar eclipse?

The outer shadow or penumbra is a zone where the Earth shadow is partial and blocks some, but not all of the Sun's rays. In contrast, the inner shadow or umbra is a region where the Earth blocks all direct sunlight from reaching the Moon. When only a part of the Moon passes through the umbra, a partial lunar eclipse is seen. If the entire Moon passes through the umbral shadow, then a total eclipse of the Moon occurs.