Super Snow Moon - 2019's brightest Supermoon to cross sky today, when and where to watch

In A Given Year, Between Two And Four Full Moons Can Be Classified As Supermoons And Sky Watchers Will Be Able To Witness The Third One In The UK On March 21, Days Before The Official Start Of The Spring.

Sky gazers and photo enthusiasts around much of the world will be in awe as the biggest and brightest full moon of the year is set to cross the sky on Tuesday, February 19. However, the 'super snow moon', as it being called, won't be as extravagant as that of the 'super blood wolf moon eclipse' that took place on January 21. It was one of the rare celestial circumstances, where a total lunar eclipse was glimpsed, offering a view of a large and rusty, red moon. But fret not, because this month's full moon will hit its peak and is promised to still be quite the natural display, nonetheless.

The astronomical event is often referred to as the snow moon because the time of the year it occurs witnesses the maximum and heaviest snowfall of the year. Talking about the science behind the cosmic phenomenon, a super moon unfolds when the moon's orbit is closest (perigee) to Earth at the same time it is full, according to NASA.

The space agency's website says, "When a full moon appears at perigee [its closest point to Earth] it is slightly brighter and larger than a regular full moon - and that's where we get a 'super moon'," adding that the phrase was coined in 1979.

Though the phenomenon will be at its best on Tuesday morning, it will be visible from Sunday night to Tuesday evening, appearing around 14 per cent largest and 30 per cent brighter than usual.

In a given year, between two and four full moons can be classified as "supermoons" and sky watchers will be able to witness the third one in the UK on March 21, days before the official start of the Spring.

When and where to watch the Super Snow Moon?

The Super Snow Moon will peak on Tuesday morning, February 19, 2019, at 10:54 am (EST), but won’t be visible to most in the US at that time. Instead, people will have to wait for moonrise, which will occur between 5:30 and 6:30 pm local time. In India it will be visible on the same day at 21:23 pm. If you are hoping to capture a good "supermoon" photo, catching the moonrise is the best bet. 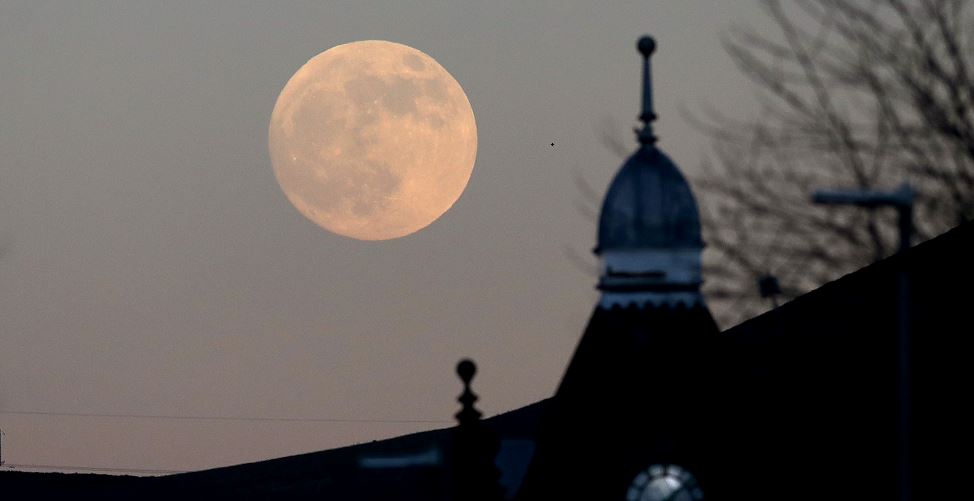 The combination of the Moon's closest approach to Earth and the Moon reaching its moment of greatest illumination together makes the Moon brighter and larger than the usual. Enthusiasts are advised to use Binoculars or a small telescope to have the best ever experience of the natural phenomenon. Meanwhile, if you are planning to capture the event, you can use your android device but should make sure that you do not zoom the picture and use a tripod to get it clicked.