Total Solar Eclipse 2019 will sweep across the South Pacific and parts of South America on July 2. The sky gazers in India will not be able to watch the rare natural phenomenon since it would be night in the country. In parts of South America sky watchers can see a partial eclipse. The solar eclipse will start at 12:55pm EDT (10:25pm Indian Standard Time) and end at around 12:59pm EDT (10:29pm IST). The eclipse will be at its peak when the moon will fully cover the sun. NASA will be covering the beautiful natural phenomenon in English and Spanish and will also share live images, videos, and updates before, during and after the eclipse.

You can watch the Total Solar Eclipse LIVE from any part of the world on:

Total Solar Eclipse 2019: With this photo guide, you can find out exactly where the eclipse will be visible and what it will look like. 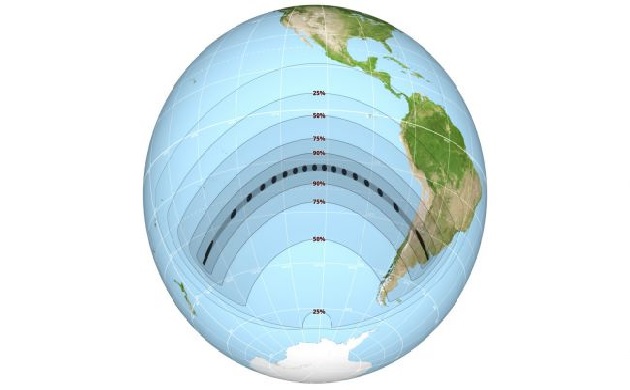 Total Solar Eclipse 2019: This map represents the path that the moon's shadow will take across the Earth's surface during the total solar eclipse. (Credits: NASA) 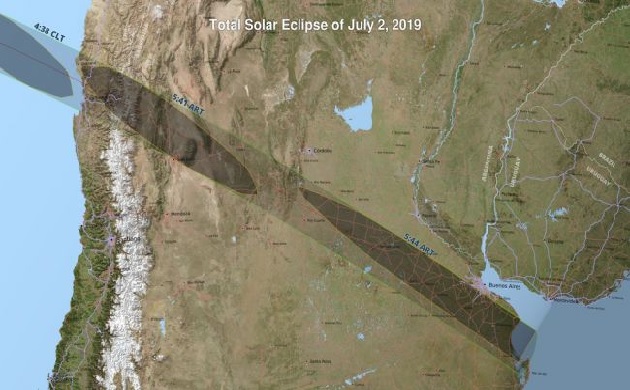 What is Total Solar Eclipse?

A 'Total Solar Eclipse' occurs when the moon blocks the sun's entire solar disk in the sky, which results in dimming and cooling of the atmosphere for minutes at a time since the lunar shadow travels across a particular region of Earth’s surface. The moon orbits about 239,000 miles from Earth, appear the same size in the sky as the sun, which on the other hand, is significantly larger than the moon and much farther away.