Important Components Of The Modules Of India’s Ambitious Second Lunar Mission, Chandrayaan-2, To Be Launched On Monday, Have Been Manufactured By A Union Government-run Centre.

On Monday, the Indian Space Research Organisation (ISRO) will be launching country’s prestigious lunar mission, Chandrayaan 2. Ahead of its launch, ISRO released the behind the scenes video of the mission's various components coming together. This will be ISRO’s first mission to land on any celestial body and a follow-up to Chandrayaan-1 launched in 2008.

Important components of the modules of India’s ambitious second lunar mission, Chandrayaan-2, to be launched on Monday, have been manufactured by a Union government-run centre. The Central Tool Room and Training Centre (CTTC) has manufactured 22 types of valves for fuel injection and other parts for the cryogenic engine of the Geosynchronous Satellite Launch Vehicle (GSLV) Mark III rocket, dubbed “fat boy” by Indian scientists for its ability to carry satellites weighing up to 4 tonnes, a top official said.

Seven specific assemblies for navigation and inertial momentum of the orbiter and the limbs of the moon rover ‘Pragyan’ have also been manufactured by the centre.

Here's some exclusive, behind-the-scenes footage of the mission's various components coming together - https://t.co/baOMowvWHa
Tell us what you think about it in the comments below. #Chandrayaan2 #GSLVMkIII #ISRO pic.twitter.com/Kguy33p2C1

The Indian Space Research Organisation (ISRO) had earlier said all three modules of the moon mission—Orbiter, Lander (Vikram) and Rover (Pragyan) -- were getting ready for the launch and the lander was expected to touch down on the lunar surface early in September.

The Bhubaneswar-based institution had started manufacturing the parts for the country’s prestigious lunar mission in March 2017, the centre’s Managing Director Sibasis Maity, told PTI in an interview.

Noting that CTTC had signed an agreement with ISRO in 2016 for technology transfer and a contract for supply of spacecraft component, Maity said the arrangement had helped it further strengthening its manufacturing capability. 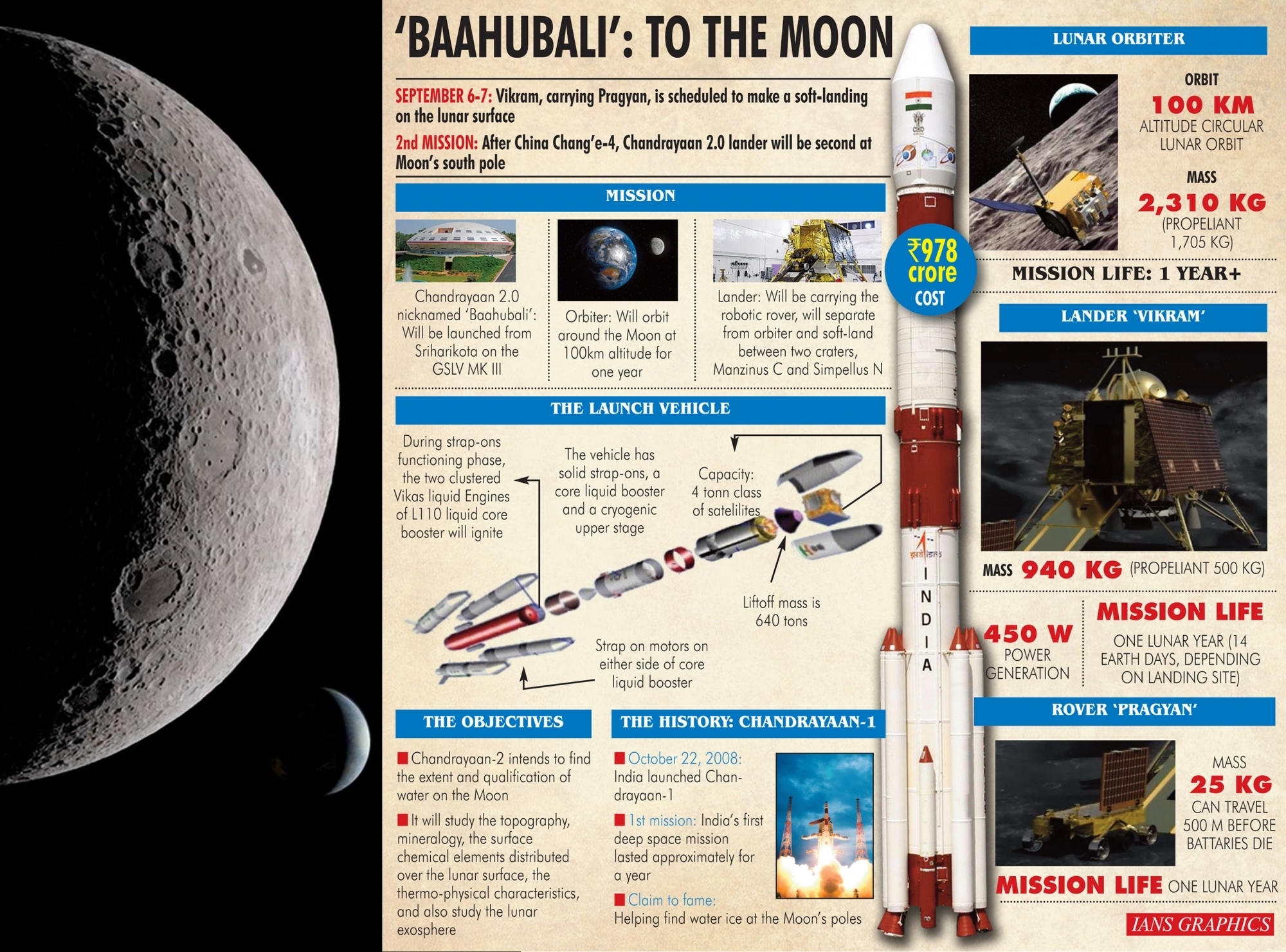 “For the current mission, the CTTC has created 22 varieties of valves for the liquid propulsion system of the launching vehicle to control the fuel while releasing it for combustion,” he said.

Recalling that the CTTC had supplied critical hardware items for the GSLV Chandrayaan 1, Maity said the institution had also made high-precision components this time for the cryogenic engine that will be used in the GSLV Mk-III.

A significant part was the creation of the limbs of the ‘Pragyan’ with wheels attached to them. The limbs of ‘Pragyan’ will work independently to help the rover negotiate the lunar surface after it lands on the moon, Maity said.

The six-wheeled moon rover can travel up to 500 metres and is solar-powered.

While the CTTC had sent seven assemblies for navigation and inertial system to ISRO inertial systems unit, the parts of the cryogenic engine were sent to the space agency’s liquid propulsion systems centre, both located in in Thiruvananthapuram, he said.

For proper testing products like valves for the launch vehicle, the CTTC has a unit inside the headquarters of the space agency in Bengaluru.

Aimed at taking a giant leap in its space programme, India will launch the mission, Chandrayaan-2, on Monday on board its heavy-lift rocket GSLV-Mk III from Sriharikota, Andhra Pradesh, to land a rover near the unexplored lunar southern pole.

The lift-off of the spacecraft weighing 3,850 kg and comprising an orbiter, the lander and the rover has been scheduled for 2.51 am from the Satish Dhawan Space Centre (SDSC), sources added.

Chandrayaan-2 is an advanced version of the previous Chandrayaan-1 mission which had 11 payloads—five from India, three from Europe, two from the US and one from Bulgaria.

The Chandrayaan-1 mission, launched in 2008, had the credit for discovery of water on the lunar surface.