Why is world curious about Moon's South Pole? ISRO explains importance of Chandrayaan-2

Why Is World Curious About Moon's South Pole? The Precise Lunar Orbit Insertion Manoeuvre Was Carried Out At 9 Am For About 30 Minutes

Chandrayaan-2 mission has crossed a major milestone with the precise lunar orbit insertion manoeuvre. The precise lunar orbit insertion manoeuvre was carried out at 9 am for about 30 minutes and Chandrayaan 2 was precisely inserted in the defined orbit. There will be further four orbit manoeuvres after this to make the spacecraft enter into its final orbit passing over the lunar poles at a distance of about 100 km from Moon's surface.

ISRO on Twitter explained why all countries are in a race to reach the South Pole of the Moon. The region is untouched by sunlight for billions of years.

Infographics, titled Why the Moon’s South Pole, shared on Twitter, ISRO says, “Its crators have been untouched by sunlight for billions of years - offering an undisturbed record of the solar system's origins.” 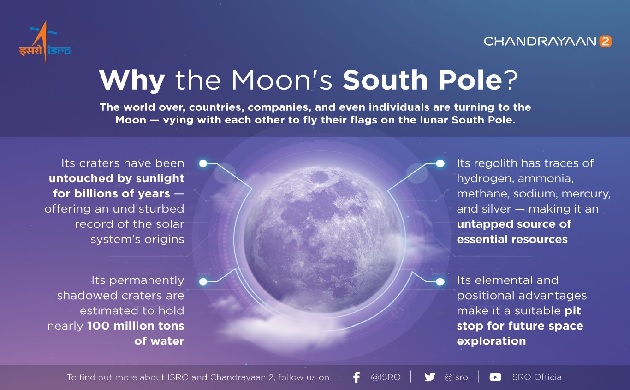 "The world over, countries, companies and even individuals are turning to the Moon - vying with each other to fly their flags on the lunar South Pole,” the graphic reads.

According to ISRO, Lunar South Pole’s regolith has traces of hydrogen, ammonia, methane, sodium, mercury and silver making it an untapped source of essential resources.

Chandrayaan-2, launched on July 22 by GSLV MkIII-M1 vehicle, had entered the Lunar Transfer Trajectory on August 14 after final orbit raising manoeuvre of the spacecraft was successfully carried out.

The health of the spacecraft is being continuously monitored from the Mission Operations Complex (MOX) at ISRO Telemetry, Tracking and Command Network (ISTRAC) in Bengaluru with support from Indian Deep Space Network (IDSN) antennas at Byalalu, near Bengaluru.

All systems on board Chandrayaan-2 spacecraft are performing normal, ISRO said on August 14. According to ISRO, Chandrayaan-2 India's second lunar expedition will shed light on a completely unexplored region of the Moon, its South Pole.