The Top Leaders From The Modi 2.0 Cabinet Will Be Assembling At The Our 'Modi Budget 2.0' Sammelan To Discuss On A Wide Range Of Topics, Including Employment, Farmers, Education, Health And Small-scale Industries.

News Nation's 'Modi Budget 2.0' Sammelan has taken place in New Delhi, a day after India's first full-time woman Finance Minister Nirmala Sitharaman presented Modi 2.0 government's Budget for the financial year 2019-20. Some of the key speakers at the conclave are - Minister of State (MoS) for Finance Anurag Thakur, Union Health Minister Harsh Vardhan, HRD Minister Ramesh Pokhriyal Nishank, Union Minister for Housing and Urban Affairs Hardeep Singh Puri and Union Minister of Road Transport and Highways Nitin Gadkari among others. The top leaders from the Modi 2.0 Cabinet will be assembling at the our 'Modi Budget 2.0' Sammelan to discuss on a wide range of topics, including employment, farmers, education, health and small-scale industries among other ongoing issues concerning the nation today.

Kumar said that the Union Budget is picture on a huge canvas without going into nitty-gritty. It should be seen as hallmark of new vision, says Kumar.

On population dividend, Kumar explained that women empowerment is the key to resolve the issue. He cited the southern states, where population growth has stabilised. He also rejected the idea of new policy for population control. He said that rather the focus should be on educating and nurturing women population.

We need to change our cropping patterns, says Rajiv Kumar.

On so-called ‘tax terrorism’, Kumar says that such individuals should give honest feedback to government.

Offshore investment must be curbed, Niti Aayog will tackle this, says Kumar.

Taxation scrutiny has been made online, more efforts are being made for greater transparency, says Kumar.

On water crisis, Rajiv Kumar says that maximum water is used in irrigation. Crops that use minimum water should be encouraged, Kumar says.

Issues of all investors will be resolved, says Rajiv Kumar.

There are many sectors in which we can easily achieve double-digit growth, says Rajiv Kumar.

Growth can only be delivered by building more hospitals and infrastructure: MK Venu

There is a focus on entrepreneurship, start ups: Sachin Chaturvedi

For growth, leasing out land to industries needs to be made easy: NC Saxena

We delivered in last five years, we will continue the development work: Zafar Islam

Policy direction was changed this Budget promising growth for everyone, says Zafar Islam

Growth missing out in this Budget, says MK Venu

There should be a disciplined growth, says Sachin Chaturvedi.

Rate of growth of bottom 50 per cent need to be looked into, says N. C. Saxena

Talking about World Cup 2019, "Hope that India wins tournament. We have a balanced side."

We had very less time to prepare Budget: Thakur

India will be the fastest growing economy: Thakur

Ensuring that every house in India has water supply: Thakur 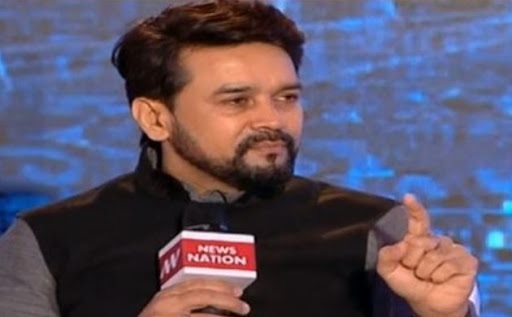 None corrupt will be spared. We have come up with strict laws: Thakur

Less than 3.5 crore people used to pay tax earlier. It is only because PM Modi's efforts that the tax payers have doubled: Anurag Thakur

Many corrupt bank officials languishing in jails, no one will be spared in this government: Anurag Thakur

Banks were allocated Rs 70,000 crore in the budget. This will result in stronger banks: Anurag Thakur

Unemployment has gone down. Government working with dedication: Anurag Thakur

Want to move away from colonialism, named the budghet Bahi Khata: Anurag Thakur

Stay tuned for next discussion in News Nation conclave on Modi Budget 2.0.

There will be a massive development in next two years: Gadkari

There will be electric buses in next six months in Delhi: Gadkari

Mahindra and Tata have come up with some quality electric vehicles.

Never said there will be EVs in next 2 years. The process takes time. The government is working hard: Gadkari

There will be a clean Ganga before the end of March 2020: Gadkari

We have Rs 20,000 crore in store for Ganga cleaning. We are running multiple projects to ensure cleaning at the earliest: Nitin Gadkari

Planning to work on double decker bus with air hostess like conductors: Gadkari

Everyone should understand London Transport Model. It can help understand people what I am dreaming about: Gadkari

Electric automobiles will be choice of people soon, will cut their expenses: Gadkari

I am in touch with foreign companies for better roads: Gadkari

Working on electric Highway. There will be playgrounds, restaurants on road sides: Gadkari

Road grid project has been initiated. There will be a massive connectivity soon: Gadkari

The government is committed to curb pollution. New highways will ensure that, says Nitin Gadkari

Making roads at an expense of Rs 50,000 crore in Delhi: Gadkari

In next five years there will be a massive development in India: Nitin Gadkari

There are 6.5 lakh villages in India. We are prioritising our work. There will be a throughout connectivity soon: Nitin Gadkari

Gadkari, who is one of the major successes in the Modi 1.0 Cabinet between 2014 and 2019, has retained the Ministry of Road Transport and Highways in the second term of the Bharatiya Janata Party (BJP) government as well.

The Union Minister is credited to increase the pace of road construction in the country from 2 km/day to 16.5 km/day in his first year and to 21 km/day in the second year and end of 2018 30 km/day.