India And Australia Gear Up For Final Shoot-out At Bangalore

Virat Kohli's Indian Cricket Team Bounced Back Strongly After Their 10-wicket Drubbing In Mumbai With A 36-run Win In Rajkot And They Will Be Hoping To Clinch The Series Against Australia In The Final ODI.

India's last three consecutive bilateral series against Australia have all been decided in the final ODI. (Photo Credit: Getty Images)

Shootout at Wadala. Shootout at Lokhandwala. These are some of the movies associated with shootout, with the term meaning a decisive battle. Add one more to the list. Shootout at Bangalore. The ongoing series between India and Australia has seen twists and turns equivalent to a Bollywood pot-boiler. India were decimated in Mumbai by 10 wickets, but thanks to Shikhar Dhawan, Virat Kohli, KL Rahul and Kuldeep Yadav, they squared the series in Rajkot with a 36-run win at the Saurashtra Cricket Association. For the third consecutive bilateral series, the final match between India and Australia will be a decider.

In Mumbai, India were outplayed in all departments. In Rajkot, the bowling, batting and even the fielding hit top gear. Manish Pandey's one-handed stunner to send back David Warner was the tonic to boost India. In the big moments, Australia faltered and India held their nerve. The batting complimented each other for India, with Dhawan and Kohli laying the foundation for Rahul to launch into a blitz that put the total beyind Australia. In the bowling, Kuldeep's wickets of Steve Smith and Alex Carey killed the contest after Ravindra Jadeja had created the opening with Marnus Labuschagne's wicket.

The real revelation of the series and indeed of the home season has been Rahul. He has batted well in all positions that he has been asked to and as keeper, he has delivered the goods. For Australia, their four-match streak in India has ended. Heading into the final match, they will be determined to remember the last time when they were in a similar situation in India. In the final game in Delhi in 2019, Australia showed the discipline which took them over the line. With India now bouncing back strongly, it will need a superhuman effort from Australia to reverse the surging Indian tide.

Rohit Sharma fell awkwardly on his left shoulder and he walked off the field during the closing stages of the match in Rajkot. Shikhar Dhawan was hit by a short ball on his chest which saw him miss the entire Australia innings. Rishabh Pant's concussion ruled him out of Rajkot but in Bangalore, he could be back. According to the latest BCCI statement, the status of Dhawan and Rohit's availability will be known just before the match. With the selectors picking the ODI and Test squad for New Zealand tomorrow, the Indian players will be determined to overcome any fitness issues and put up a solid display.

Kohli was criticised for tinkering with the batting order in Mumbai, especially on pushing himself down to four to accommodate Rahul but he always knew what he was doing. "We live in the days of social media and a panic button being pressed too early. It's very important to figure out the best team you can put on the park and when you see how KL was batting today, it's very difficult to leave someone like that out," Kohli said after the 36-run win. 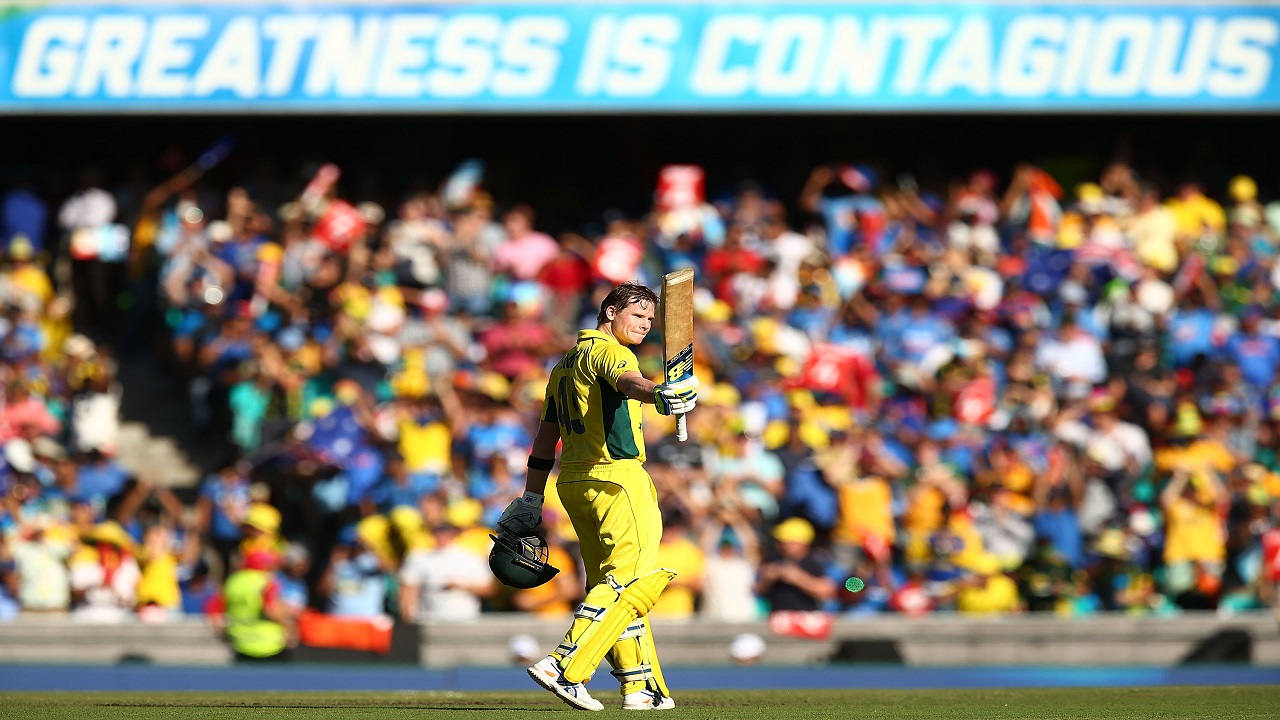 Steve Smith missed out on a hundred in Rajkot and he will be aiming to do well in Bangalore. (Image credit: Getty Images)

No significant change is expected even in the bowling composition with team preferring three pacers and two spinners. Kuldeep Yadav, who did not have the best of times in 2019, reaffirmed his value by bowling a match-winning over in which he removed Alex Carey and Steve Smith. Yuzvendra Chahal, may finally get to play alongside Kuldeep with the Chinnaswamy Stadium being his home ground in the IPL. Another positive for India was Jasprit Bumrah producing a tidy spell, his most impressive since his comeback from injury. He stifled the opposition as wickets came from the other end.

Mohammad Shami, who was a tad expensive early on in Rajkot, bowled well towards the end alongside Navdeep Saini. Australia too are unlikely to make wholesale changes in their line-up following the defeat. They were very much in the run chase until Kuldeep got rid of star batsman Smith. The visitors had a great chance of wrapping up the series but were unable to win the crucial moments. The in-form Marnus Labuschagne was impressive in his first ODI innings but got out at the wrong time.

Mitchell Starc would be itching to bounce back, having conceded 78 runs in 10 overs. His new ball partner Pat Cummins was hard to score off once again while leggie Adam Zampa got the prized wicket of Kohli for the fifth time in ODIs. However, left-arm spinner Ashton Agar has not been that effective and needs to up his game in the all-important series decider.

The M Chinnaswamy stadium is considered a belter of a wicket with plenty of runs on offer. The weather on Sunday is cloudy with a 10 percent chances of rain but Bangalore's brilliant drainage will ensure once the rain has stopped, the game is ready to be played within 10 minutes.

India and Australia have played four matches at the M Chinnaswamy stadium with both teams winning two games apiece. This will be the second ODI decider between the two sides in Bangalore, with India winning the 2013 match by 57 runs in what was a high-scoring encounter.